Conflict grows between US and allies over vaccine supply 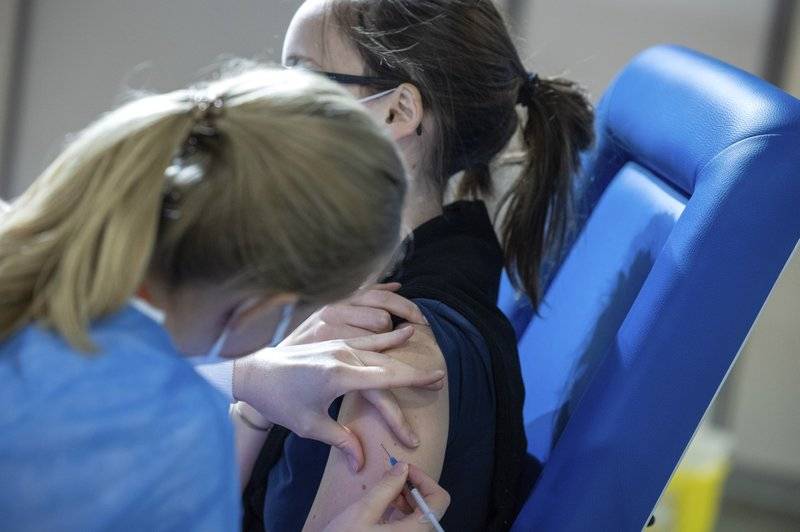 WASHINGTON — President Joe Biden’s administration is stockpiling tens of millions of doses of a COVID-19 vaccine whose authorization in the U.S. remains uncertain, frustrating U.S. allies who say those doses should be used now to save lives overseas.

The standoff is part of a growing global debate over who should have access to hundreds of millions of doses of vaccine that pharmaceutical companies are churning out in the U.S. Besides generating ill will, Biden's insistence on an excess supply for America is potentially creating new openings for geopolitical rivals Russia and China.

A two-dose vaccine from AstraZeneca has received emergency clearance from the European Union and World Health Organization but not from the U.S. Now America's partners are prodding Biden to release his supply, noting that the administration has lined up enough doses of three already-authorized vaccines to cover every American adult by the end of May and the entire U.S. population by the end of July.

AstraZeneca says that the U.S.-produced vaccines are “owned” by the U.S. government and that sending them overseas would require White House approval.

Even though the 27-nation European Union is eager to relaunch a more fruitful trans-Atlantic relationship after the bruising Trump presidency, the vaccine issue is proving to be a thorny topic, with some in Europe seeing it as a continuation of former President Donald Trump’s “America First” focus.

EU member states’ ambassadors discussed the challenge this week. The German government said on Friday it was in contact with U.S. officials about vaccine supplies but stressed that the European Commission has the lead when it comes to procuring shots for member states.

“Hopefully, we will be in a position on both sides of the Atlantic to ensure that sufficient quantities of vaccine doses are distributed out in line with the schedule so as to complete the vaccination campaigns,” EU commission chief spokesman Eric Mamer said.

Well over 10 million doses of AstraZeneca’s vaccine are stockpiled in the U.S. for use here.

“We want to be oversupplied and overprepared,” White House press secretary Jen Psaki said Friday, so Americans can still be swiftly vaccinated in the event of unforeseen issues with the existing production timeline.

“We have not provided doses from the U.S. government to anyone,” she said.

Asked about the stockpiled vaccine, White House COVID-19 coordinator Jeff Zients said, “We have a small inventory of AstraZeneca so, if approved, we can get that inventory out to the American people as quickly as possible.” He said the U.S. was following the same procedure it used for the already-authorized vaccines.

Drug manufacturers that received federal assistance in developing or expanding vaccine manufacturing were required to sell their first doses to the U.S. In the case of AstraZeneca, whose vaccine was initially expected to be the first to receive federal emergency authorization, the government ordered 300 million doses — enough for 150 million Americans — before issues with the vaccine’s clinical trial held up clearance..

The company said this month it believes it will have roughly 30 million doses available to the U.S. government by the end of March, and an additional 20 million by the end of April.

As foreign regulators have moved ahead with the shot, the U.S. has not dropped its contractual claim on the initial doses produced in America.

That policy has also come under criticism from U.S. neighbors Canada and Mexico, which have been forced to seek vaccine manufactured on a different continent, rather than across the border. Meanwhile, the Biden administration has purchased enough doses of Moderna, Pfizer, and Johnson & Johnson to inoculate 150 million more people than the U.S. population by the end of the year.

The U.S. has also ordered 110 million doses of vaccine from Novavax, which is expected to file for emergency authorization as soon as next month.

AstraZeneca’s 30,000-person U.S. trial didn’t complete enrollment until January. The company hasn’t given any hints of when initial results might be ready beyond an executive telling Congress last month he expected it would be “soon.”

The European Union, amid its own stumbling vaccine rollout, appears increasingly resigned to the Biden administration retaining control of the U.S. doses.

The EU is at odds with AstraZeneca, too, because the company is delivering far fewer doses to the bloc than it had promised. Of the initial order for 80 million in the first quarter this year, the company will be struggling to deliver half.

Despite shortages at home and often being accused of vaccine protectionism itself, the 27-nation bloc has allowed the export of well over 34 million doses of COVID-19 vaccines in past weeks, including 953,723 to the United States.

Meanwhile, Russia and China have used their domestically produced vaccines for strategic leverage.

China has pledged roughly half a billion doses to more than 45 countries, according to a country-by-country tally by The Associated Press. Four of China’s many vaccine makers are claiming they will be able to produce at least 2.6 billion doses this year.

Russia has sent millions of doses of its Sputnik V vaccine to countries around the world, even as it vaccinates its own population. Analysts say a goal of this vaccine diplomacy is to bolster Russia’s image as a scientific, technological, and benevolent power, especially as other countries encounter shortages of COVID-19 vaccines because richer nations are scooping up the Western-made versions.

Israel, which has vaccinated more than half of its population with Pfizer vaccines produced in Europe, has also attempted to use vaccine diplomacy to reward allies.

Biden did move to have the U.S. contribute financially to the United Nations- and World Health Organization-backed COVAX alliance, which will help share vaccine with more than 90 lower and middle-income nations, but the U.S. has yet to commit to sharing any doses.