Rihanna, Hadid sisters among famous celebs speak up for Palestine in wake of Israeli attacks 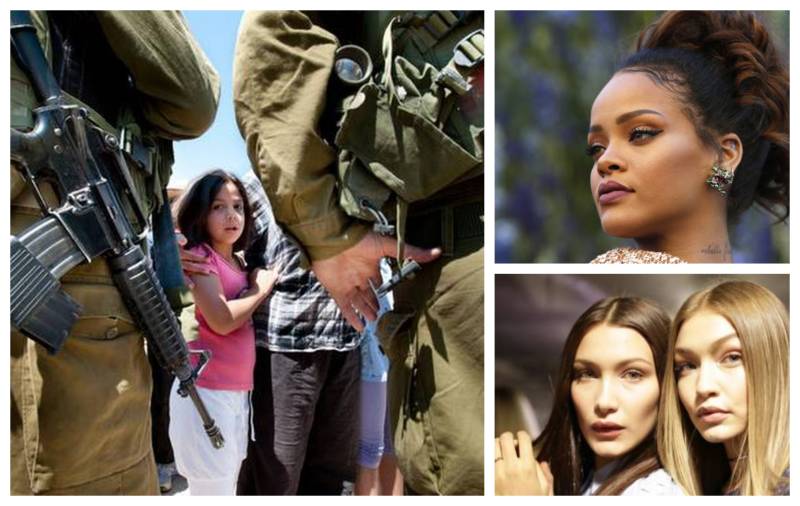 JERUSALEM – World's highest-paid models, Bella and Gigi Hadid, have joined the list of international celebrities who are slamming the ongoing Israeli atrocities in Jerusalem while using their social media power to express support for the Palestinians.

Supermodels sisters, who are half Palestinian and half Dutch, lashed at Israeli bombardment which has killed more than 80 people, including children, since Monday.

The duo took to social media and lashed out for limited coverage and discriminatory algorithms by the media regarding the ongoing attacks.

Gigi Hadid, took to her Instagram handle, where she has more than 66 million followers, shared a post stated, ‘One cannot advocate for racial inequality, LGBTQ and women's rights, condemn corrupt and abusive regimes and other injustices, yet choose to ignore the Palestinian oppression. It does not add up. You cannot pick and choose whose human rights matter more’, she added in the post.

“I stand with my Palestinian brothers and sisters, I will protect and support you as best as I can. I LOVE YOU,” she said.

In another post, she wrote: ‘Future generations will look back in disbelief and wonder how we allowed the Palestinian suffering to continue for so long. A human tragedy unfolding right in front of our eyes. Politicians stutter neutral words in fear of being reprimanded whilst the world remains silent to avoid offending the wrong people.’

‘History has taught us to speak up. You are either on the right side or you are not. It's that simple,' she added.

Meanwhile, singer and businesswoman Rihanna also highlighted the issue on her official handle. Expressing how bad she feels while watching Palestinian people killed on street, she penned ‘My heart is breaking with the violence I’m seeing displayed between Israel and Palestine! I can’t bare to see it! Innocent Israeli and Palestinian children are hiding in bomb shelters, over 40 lives lost in Gaza alone, at least 13 of whom were also innocent children!’

‘There needs to be some kind of resolve! We are sadly watching innocent people fall victim to notions perpetuated by government and extremists, and this cycle needs to be broken!’ she further explained.

Lena Headey, one of the stars from famous Game of Thrones, also took to the social meia in support of Palestinians with the text “Save Sheikh Jarrah”.

1500 Palestinians face expulsion in #Jerusalem. 200 protesters have been injured. 9 children have been killed. Sanctions on South Africa helped free its black people - it’s time for sanctions on Israel to free Palestinians. Join the call. #SheikhJarrah https://t.co/f9R6LYljez

The death toll from more than two days of Israeli strikes on Gaza rose to 83 on Thursday. The dead included 17 children, while 487 people have been wounded, according to health officials.