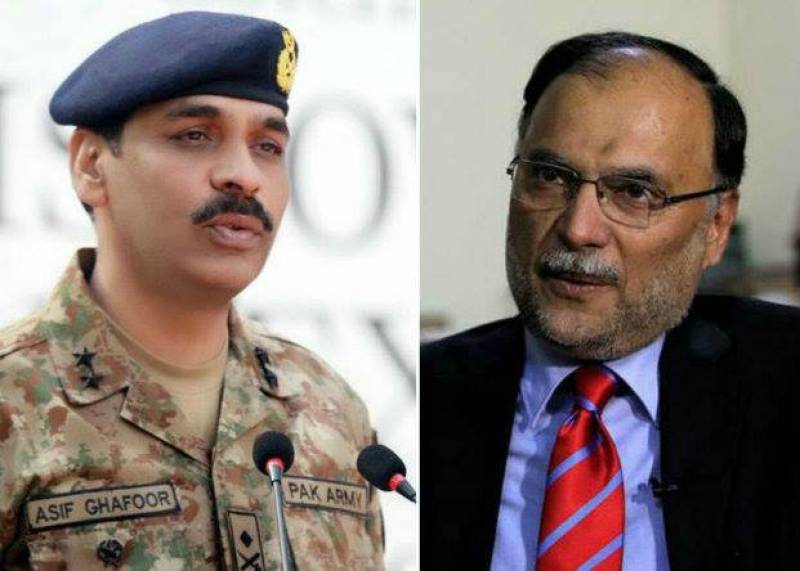 WASHINGTON - Interior Minister Ahsan Iqbal on Friday has reacted on the ISPR's statement and said that the army should refrain from speaking on the Pakistan’s economic issues as “irresponsible” statements could affect country’s image globally.

Speaking in Washington, the minister said Pakistan economy was much more stable as compared with the situation in 2013. “We have seen a rise in imports as the industrial sector is investing in the power sector but it’s nothing to be alarmed about,” he maintained.

“Revenue generation has witnessed a two-fold increase because of the improvement in the tax collection system,” he added.

Iqbal said Pakistan’s current development budget was its biggest in the country’s history.

He added that the government had allocated more funds and resources for security.

“We don’t need to seek loans from the IMF,” he retorted to the recent criticism that Pakistan was carrying a “beggar’s bowl” and there were economic concerns because of its “sky-high debt.”

The response seems to have been directed at an interview the military's spokesman gave to a private TV channel the day earlier, in which he had said: "If the economy is not bad, it is not doing so well either."

On Wednesday the Chief of Army Staff (COAS) Gen Qamar Javed Bajwa had said, “the economy is showing mixed indicators,” he had said before an audience of businessmen and the military leadership of Karachi at a daylong event organised by the Federation of Pakistan Chambers of Commerce and Industry (FPCCI) and ISPR at the DHA Golf Club.

It is pertinent to mention that the World Bank has also warned that macroeconomic risks in Pakistan have increased substantially during the fiscal year 2017, as the external balance is particularly vulnerable given the persistent current account deficit, affecting the country’s reserve position.

Pakistan’s weaker macroeconomic discipline has led to vulnerabilities in the balance of payments. Since the International Monetary Fund (IMF) programme came to an end, external indicators of the economy have deteriorated, says ‘The South Asia Economic Focus Fall 2017’ released earlier this month, ahead of the World Bank and IMF annual meetings.

Meanwhile, PTI chief Imran Khan was quick to respond to the interior minister's statement. Ahsan Iqbal's unwarranted attack on ISPR is absurd because the dismal state of Pak's economy is known to the world, Khan tweeted.

Ahsan Iqbal's unwarranted attack on ISPR is absurd bec the dismal state of Pak's economy is known to the world.