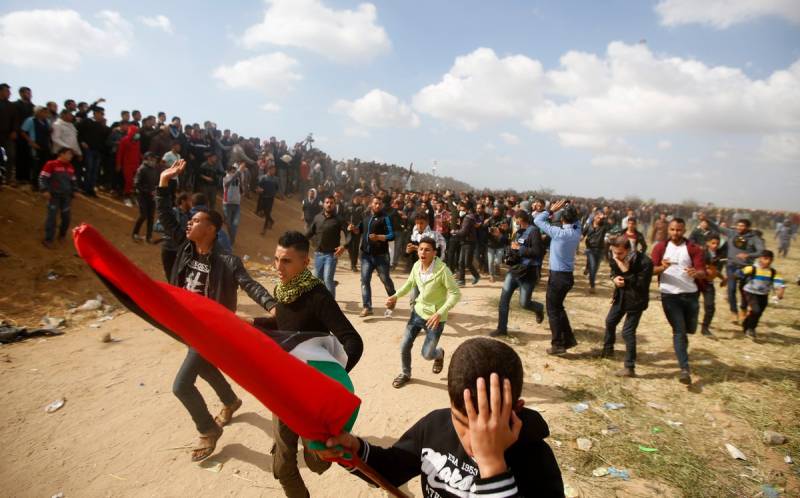 GAZA - At least five Palestinian have been killed after Israel's occupational forces resorted to live fire on peaceful protesters in southern Gaza Strip, the Palestinian Health Ministry said on Saturday.

Medics at the scene in the Rafah area said four Palestinians were killed by an Israeli tank shell but an Israeli military spokesman said the army was not involved. “We have no knowledge of any Israeli strike in the area,” he said.

The Saturday's deaths took the toll to over 30 since the Great March of Return protests erupted on March 30.

On Friday, a 28-year-old Palestinian man died and 233 were wounded by live Israeli fire as thousands of people gathered to protest along the eastern border of the Gaza Strip.

The Palestinian Ministry of Health in Gaza identified the slain Palestinian as Islam Hirzallah, who received a live bullet during protests in eastern Gaza City. He was later shifted to the al-Shifa Hospital where he was pronounced dead.

According to Haaretz, overall, 969 Palestinians, including 20 women and 67 were under age 18 were injured in Friday's protests. Thirteen Palestinians were wounded by rubber-tipped bullets.

At least 36 Palestinians have been killed and thousands others injured since a massive Palestinian protest was launched to mark the Palestinian Land Day along the border between Gaza and Israel.

The Friday's rally was the third round part of a six-week long protest expected to reach its peak on May 15, the day Israel celebrates its establishment. But the Palestinians mark it as "Day of Catastrophe" because a large number of them have been forced to leave their homes.