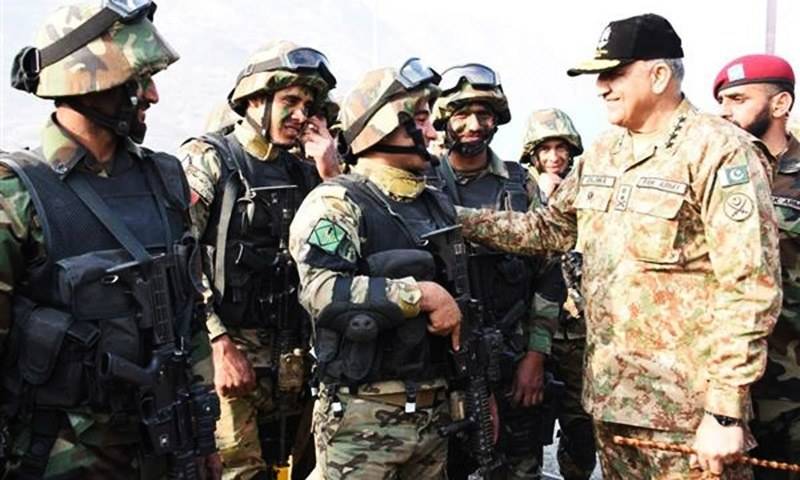 RAWALPINDI – Chief of Army Staff General (COAS) Qamar Javed Bajwa has said the Pakistan Army is fully prepared to play its part “in line with its national duty” for Kashmir cause, according to Inter-Service Public Relations (ISPR).

“Reality of #Kashmir was neither changed by an illegal piece of paper in 1947 nor will any other do it now or in the future. Pakistan has always stood by Kashmiris against India’s hegemonic ambitions, will always do. There can never be a compromise on #Kashmir,” the top military was quoted as saying in his Independence & Kashmir Solidarity Day message by the military’s media wing.

We shall stand in the face of tyranny, regardless of the cost. Pakistan Army is fully alive to the sanctity of Jammu & Kashmir and will remain fully ready to perform its part in line with our national duty for Kashmir cause”, COAS on Independence & Kashmir Solidarity Day. (2of2).

General Bajwa said Pakistan “shall stand in the face of tyranny, regardless of the cost”. “Pakistan Army is fully alive to the sanctity of Jammu & Kashmir and will remain fully ready to perform its part in line with our national duty for Kashmir cause”, Director General Major General Asif Ghafoor wrote in a series of Twitter posts on Wednesday.

On Monday, General Bajwa spent Eidul Azha with troops in Bagh sector at Line of Control, which divides the Himalayan region of Kashmir between Pakistan and India . Addressing the soldiers, he said that India is trying to shift global attention from its illegal Kashmir move to the Line of Control (LoC) and Pakistan , and must not be given any chance to cover up its crimes in the held valley.

RAWALPINDI – Chief of the Army Staff (COAS) General Qamar Javed Bajwa on Monday visited the Line of Control (LoC) and ...

The Modi-led government earlier this month had stripped Kashmiris of special autonomy by repealing Article 370 of the Indian Constitution that the region had for seven decades through a rushed presidential order.

The move escalated tensions between the two nuclear-armed states with Islamabad downgrading its diplomatic relations with New Delhi and suspending all bilateral trade.

Speaking to the troops during Monday’s visit, the army chief said the government has initiated multiple efforts to redress the Kashmir crisis. “Our resolve to solve the Kashmir dispute is as strong as desire for peace,” he added.

“Our religion teaches us peace but also to sacrifice and standing for the truth,” Gen Qamar said while reiterating, “We stand with our brothers and sisters in Kashmir and no matter how much time and whatever effort it takes, we will prove equal to the challenge, InshaAllah.”

Pakistan is celebrating its 73rd Independence Day as Kashmir Solidarity Day as part of the government’s decision to show solidarity with Kashmiris. In their solidarity messages, the government and opposition leaders have lent “unconditional” support to occupied Kashmir .

Prime Minister Imran Khan, while addressing the Azad Jammu and Kashmir (AJK) legislative assembly, said that the Indian government’s decision to revoke Article 370 and strip occupied Kashmir of its ‘special status’ was a strategic blunder.

The premier observed that “we are facing a dangerous ideology of RSS which was inspired by the Nazi party of Hitler. RSS followers considered themselves superior to other nations in India .”

“The RSS ideology hates religious minorities including Muslims and Christians and considers them as a stone of their path.

“Ethnic cleansing of Muslims is also included in their agenda,” he warned.

Pakistan has also asked the United Nations Security Council (UNSC) to summon a session on the deteriorating situation in occupied Kashmir , after India revoked its special status.

Foreign Minister Shah Mahmood Qureshi wrote a letter to the UNSC president on Tuesday, asking that the Indian act, which is unconstitutional and against the conventions of the United Nations, should be discussed in a session.