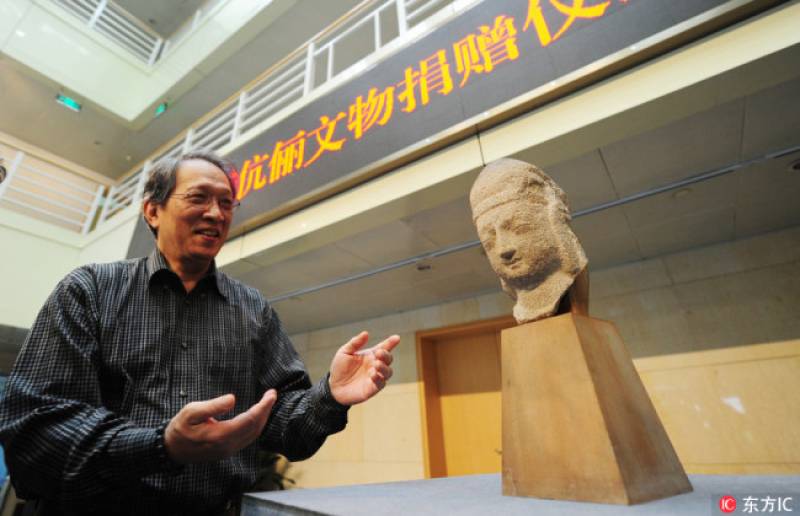 TAIYUAN - A 1,500-year-old statue head that was stolen from the Yungang Grottoes in north China's Shanxi Province has been returned to China.

The 26.5-cm-tall, 12-cm-wide statue head was donated to the Shanxi Museum by John S. C. Wang and his wife on Friday.

The smiling figure has a tall nose, slim eyes and lips, and long ears, and was carved with a hat in the nomadic Xianbei style.

The head, dating back 1,500 years to Northern Wei Dynasty (386-535), was stolen in around 1925 from a cave in Yungang Grottoes, according to Zhao Kunyu from the Yungang Grottoes research institute.

Wang, 71, is a calligraphy teacher at Freer Gallery of Art and Arthur M. Sackler Gallery. He found the statue head when he served as an advisor at an auction house.

"I was amazed by its delicate carving and the peaceful facial expression," said Wang, adding he bought it from a third-generation collector who did not appreciate the antique as much as his ancestors.

This is the second time Wang has donated artifacts from Yungang Grottoes to China. In 2016, Wang gave a Buddha statue head to the museum.

More than 59,000 statues were carved in 45 caves in Yungang Grottoes, which was listed as a UNESCO World Cultural Heritage site in 2001.