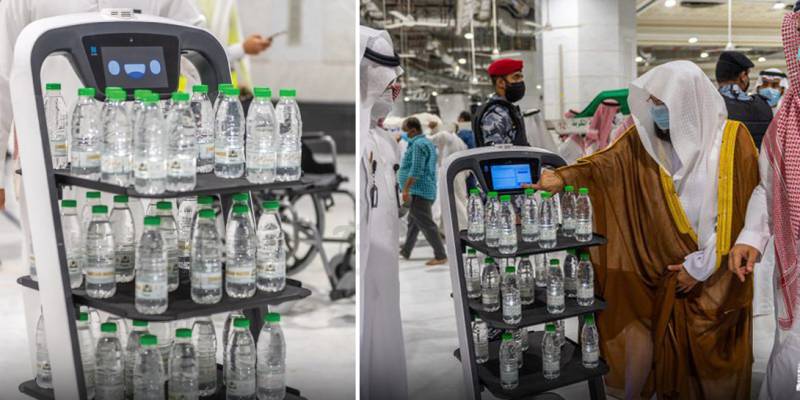 RIYADH – In an attempt to assist pilgrims and limit human contact to stem the spread of the novel Covid-19, the authorities in the Kingdom of Saudi Arabia launched smart robots that will now distribute the holy Zamzam water in the Grand Mosque of Makkah and the Prophet’s Mosque in Madina.

Reports in international media quoting the Saudi Press Agency said the Zamzam water bottles will be distributed without human intervention and without disturbing the pilgrims.

Sheikh Dr Abdulrahman while speaking with the press stressed the importance of utilizing modern day technologies to serve humanity, especially in the COVID-19 pandemic. Adding that the robot is designed to reduce the chance of contamination and pilgrims no longer need to queue to quench their thirst or share their bottles with anyone else.

The newly launched smart robots have an automatic control system that can operate for five to eight hours without human help.

JEDDAH – Saudi Arabia has decided that overseas pilgrims will not be allowed for Hajj 2021 due to COVID-19 ...

In another development, Saudi Arabia Saturday announced that it will allow only 60,000 local vaccinated residents to perform this year's Hajj, and Muslims from abroad will be barred for a second straight year.

RIYADH – A Saudi Arabia-based astronomer has revealed the most likely dates for Eid Al Adha, which is expected to ...