“Some of the largest current threats to sustainable development emanate from crimes against the environment and, in the context of COVID-19 pandemic, is the trafficking of counterfeit medical products”. 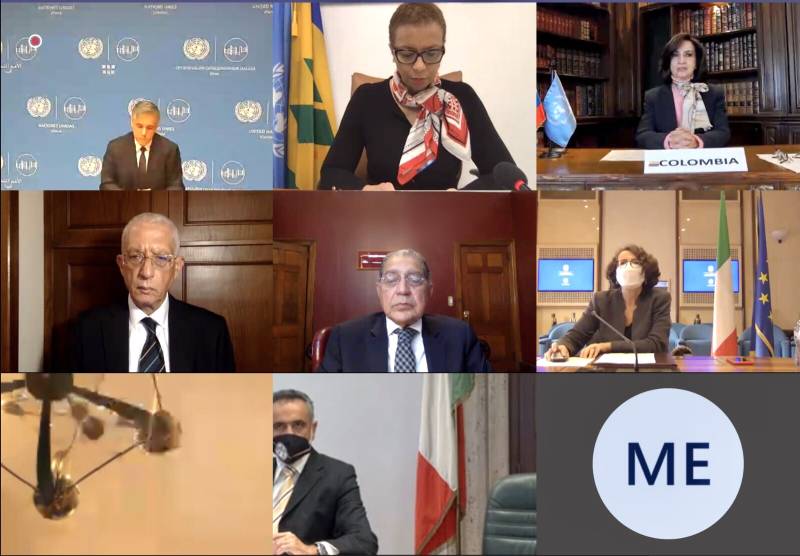 NEW YORK  - “This 20th anniversary is momentous. While we should celebrate this shared victory and acknowledge our collective accomplishments, it is also a time to reflect on what still remains to be done”: Ambassador Munir Akram said this at the event today that was held to celebrate the 20th anniversary of the adoption by the General Assembly of the United Nations Convention against Transnational Organized Crime, popularly known as the “Palermo Convention”.

“Two decades later, UNTOC remains the only global legal instrument against transnational organized crime, accompanied by its three protocols to prevent and counter: trafficking in persons, smuggling of migrants; and the illicit manufacturing of, and trafficking in, firearms”, he said.

Akram said further that: “The reality of organized crime remains complex and multifaceted, but at its core is the objective of organized criminal groups to obtain illicit profits and control markets of illicit goods and services”. “Apart from social and economic disruption, criminal activities retard and reverse development gains”, he insisted.

He informed that “It is against this backdrop that Target 16.4 has decisively placed fighting organized crime and illicit financial flows on the 2030 Sustainable Development agenda”.

In his capacity as a President of the Economic and Social Council, he reiterated that “I am proud that the Council (ECOSOC) is continuing its tradition of policy debate and standard-setting on various dimensions of sustainable development including crime prevention”.

“The various functional commissions of ECOSOC, in particular the Commission on Crime Prevention and Criminal Justice (CCPCJ), continue to contribute in an integral way to the work of the Council on the responses to transnational organized crime and its causes and consequences”, he informed further.

“The CCPCJ will also proceed with any required follow up of the discussions and recommendations from the 14th United Nations Congress on Crime Prevention and Criminal Justice, which has been postponed from 2020 and will now take place in Kyoto, Japan, in March 2021,” he said.

He appreciated the fact that “The CCPCJ’s has a large portfolio of issues and is, therefore, a rich knowledge bank that benefits the work of the Council and the HLPF”.

“I intend to hold the Annual dialogue of the Bureau of ECOSOC with the Chairs of the subsidiary bodies of the Council in early January 2021. This is an important opportunity for the Council to explore ways to enhance coordination and coherence among its subsidiary bodies”, he informed.

However, expressing his concerns, he said that “Unfortunately, despite our efforts, organized crime and illicit financial flows remain a chronic and ubiquitous problem for many developed and developing countries”.

Stating the impact of COVID-19, he said that “Like all other aspects of our daily lives, the impact of Covid-19 impact on transnational organized crime has been significant. Some of the largest current threats to sustainable development emanate from crimes against the environment and, in the context of the COVID-19 pandemic, is the trafficking of counterfeit medical products. In the meantime, corruption and various forms of illicit trafficking and migrant smuggling continue to undermine the rule of law, economic development and the livelihoods of people”.

He proposed that “To face these challenges, Member States must strengthen their coordination and cooperation to effectively prevent, investigate and prosecute transnational organized crime, within the framework provided by the Palermo Convention”.

He hoped for the Conference of the State Parties of UNTOC, with technical assistance from the UNODC, to prioritize a few key issues:

a) First, in the context of Covid-19, there is a need to criminalize corruption and laundering of proceeds of crime related to manufacturing and trafficking of falsified medical products and strengthen international cooperation.

b)  Second, environmental crimes and ever-growing illegal trade in wildlife – which could lead to other zoonotic diseases – must be dealt on a priority basis.

c) Third, change in labour and migration laws is also critical in addressing the demand for the services of human traffickers. Opening up additional avenues for legal migration is one way to reduce the demand for smuggling services and meet migration-related SDGs.

d) Fourth, and most importantly, the bleeding of the resources developing countries through illicit financial flows must be halted. It is nothing short of criminal to allow such flows to continue during this crisis when developing countries are already struggling to overcome the challenges posed by shrinking fiscal space to fight the Pandemic and achieve the SDGs. There is a need to build synergies between the Palermo Convention and the UN Convention against Corruption to further strengthen international cooperation particularly on the return of stolen assets”.

He insisted that “Stepping up action against organized crime is urgent today. The COVID19 crisis must not become an accelerator for criminal activity”.

He reiterated this conviction that “on the 20th anniversary of the UN Convention against Transnational Organized Crime, we should recommit ourselves to stop criminals from compromising the world’s COVID response and recovery and the realization of the SDG. “Coordinated approaches to preventing and combating transnational organized crime is critical to recover better from the crisis, help achieve peaceful and inclusive societies, and make progress towards all of the Sustainable Development Goals”, Akram concluded.