Iqra Aziz, Yasir Hussain will be sharing silver screen for the first time 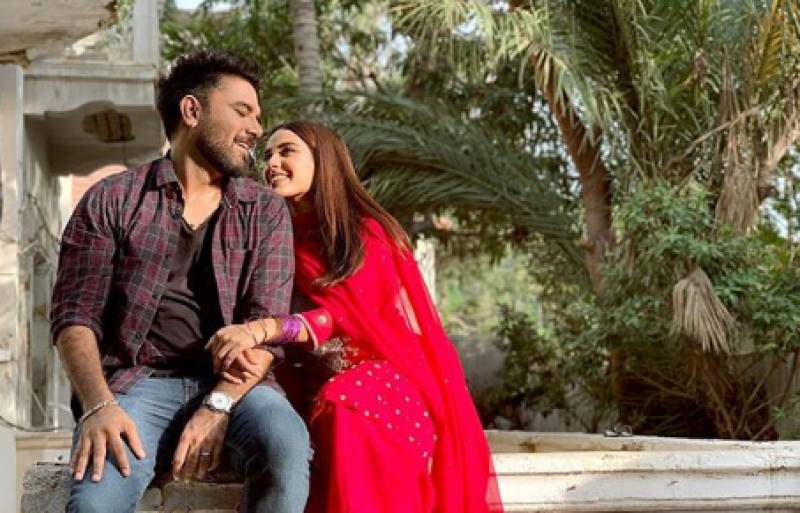 KARACHI - Pakistani popular TV actors Yasir Hussain, and Iqra Aziz will be sharing the screen together for the first time in upcoming drama serial Jhooti.

Both the stars have been in the limelight ever since their love affair became public, and after making their engagement official they are pairing up for a drama as well.

Earlier, on Thursday, Yasir Hussain has shared an adorable photo, revealing they will be working together and at the same time teasing his bae, he wrote, “JHOOTI @iiqraaziz k sath acting ka pehla experience hai. Bhai wah kya hi kamaal adakara hain aap. (Working for the first time with Iqra Aziz. No doubt you are an awesome actor)”

On her social media handle, Iqra Aziz had earlier shared a glimpse at her character Nimra in upcoming drama Jhooti. The upcoming drama is based on the story of a girl who believes that money is all you need in this world.

Earlier in July 19, Iqra and Yasir's PDA at the LSA 2019 had sparked off some major controversy. The grand proposal triggered many, and everyone from their fellow celebrities to their fans is talking about them.

Responding to the criticism, the Sunu Chanda girl had shared an elaborated post on her Instagram handle along with a picture of her engagement ring in which she has conveyed a bold message to all the trollers and people passing negative comments to the newly engaged couple.

Iqra stated that “Meri yeh khushi itni bari hai k mujhe sirf achi baatein aur duaein sunayi derahi hain [This joy of mine is so huge, that only good wishes and prayers are the only things that are audible to me],” she stated. “Love is to express, not to impress, My man expressed his love in front of the world which takes a lot of guts and i am blissful you’r my ZING. Thankyou for being so expressive, generous, caring, loving, chivalrous, realistic and nobleI love you...X".

What is your say on drama #Jhooti's motto? Let us know in the comments box below.