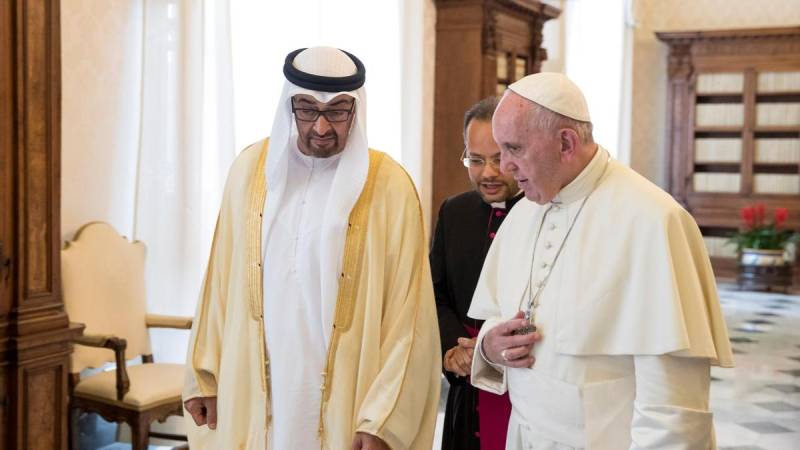 VATICAN CITY – Pope Francis will become the first Pope in history to visit the Arabian Peninsula when he makes an apostolic journey to the United Arab Emirates next year, the Vatican News announced.

Thousands of people from across the UAE are readying themselves for Pope Francis's landmark visit to Abu Dhabi.

Highlights of the trip include an interreligious meeting, an official visit to the Crown Prince, the meeting in the Great Mosque of Sheikh Zayed, and the celebration of Mass in Abu Dhabi.

A large public Mass will be held at Zayed Sports City at 10.30am on February 5, with more than 100,000 people expected to attend, according to a full itinerary for the pontiff's visit revealed on Wednesday.

The Pope will depart from Rome on Sunday, February 3rd at 1pm (Rome time) and is scheduled to arrive at Abu Dhabi Presidential Airport at 10pm (local time).

The program starts on Monday February 4th at 12 noon with the welcome ceremony at the Presidential Palace, followed by the official visit to the Crown Prince. At 5pm in the evening, the Pope will meet privately with members of the Muslim Council of Elders in the Grand Mosque of Sheikh Zayed. From there, around 6pm, Pope Francis will proceed to the Founder’s Memorial where he will speak at the interreligious meeting.

On Tuesday February 5th at 9.15am, Pope Francis will visit the Cathedral of Abu Dhabi and at 10.30am he will celebrate Mass in the Zayed Sports City.

After Mass, the Pope will proceed directly to Abu Dhabi Presidential Airport where the farewell ceremony will take place. The papal plane is scheduled to depart at 1pm (local time) and will arrive at Rome’s Ciampino airport at 5pm in the evening.

ISLAMABAD (Web Desk) - Pakistan will extend an invitation to Pope Francis to visit the country during his trip to Asia ...