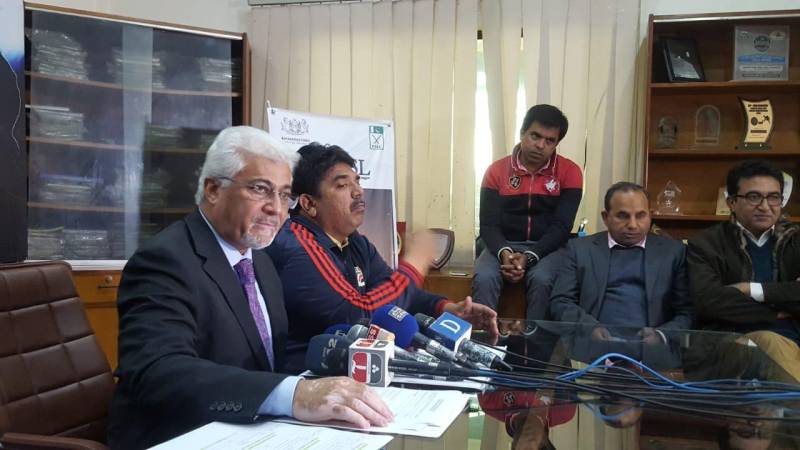 LAHORE - Associate Secretary of Pakistan Hockey Federation (PHF) Ayaz Mahmood Tuesday said that Pakistan's participation in the FIH's Pro League would only be possible if the federation gets the required funds from the government.

Addressing a news conference along with Pak hockey team coach Danish Kaleem, the PHF official made it clear that if the Federation does not get the necessary funds, it will not be possible to ensure participation of the green shirts in the pro league. Ayaz who took the office early this month faced a barrage of stinging questions.

The breakup of the expenditure was later presented to the media persons. "Presently, we only have Rs1.75 crore in the kitty. For our first Pro League assignment in Argentina, almost 3 crores are required. For the entire Pro League, Rs10-12 crore is needed", said the PHF official.

Ayaz said, "Even in the past when Pakistan won all the meaningful titles, World Cup (four times), Olympics (thrice) and Asian Games (eight times) the federation was dependent upon the government grant."

He agreed that the government's reluctance could be due to the damaged credibility because of the misdoings of the past federations. Danish Kaleem emphasized that Pakistan's participation in the FIH Pro League is important for a number of reasons.

"Mere participation would give Pakistan a large number of FIH ranking points. Canada (10th) and Ireland (11th) in the FIH rankings are not part of the Pro League. Our presence in the Pro League should enable Pakistan (12th) to easily go past these countries in the FIH rankings which will increase our chances to qualify for the 2020 Olympics. Moreover, the experience of playing 16 matches against world's top teams would be wonderful exposure for our young team,' he elaborated the reasons. Ayaz Mahmood added, "In the case of non-participation, FIH could impose a ban on Pakistan's participation in the international events apart from inflicting a fine."

In all probability, hockey is the sole hope for Pakistan’s presence at the 2020 Olympics 'through qualification'. Otherwise, he told it won't be different from the 2016 Olympics when not a single sports person could qualify from world's fifth largest country. The seven Pakistani entrants only came through quota spots/wild card.

When asked about reinvigorating the domestic hockey scene, the associate secretary replied, "Pakistan Hockey Super League, which will be a privately sponsored event scheduled in March promises a lot. I am optimistic about its success. That should lead to more corporate interest in Pakistan hockey; lessening our dependence on the government funds".

"I will request the media to fully support PHF's request to the government for the monetary grant to ensure Pakistan's participation in the FIH Pro League- so important for the survival of our national game," said the PHF official.