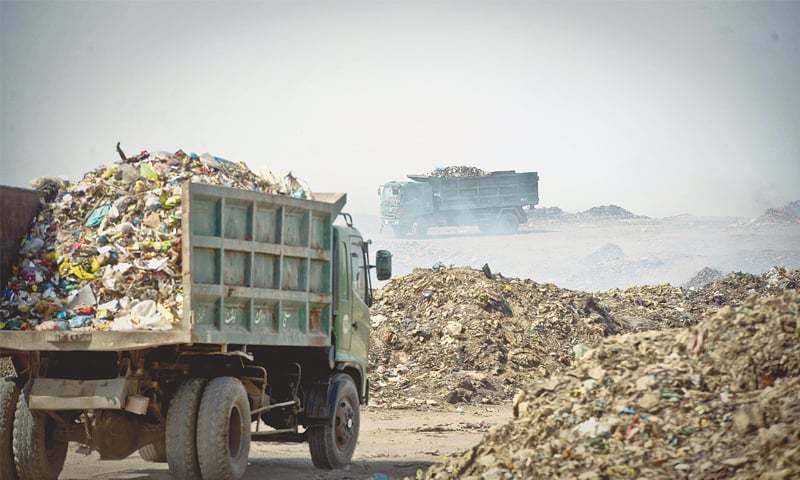 Karachi generates more than 13,000 tons of garbage/solid waste on a daily basis, estimates vary, but anyone living in the city knows how trash is everywhere, whether it be a public park or a sidewalk.

The study also suggested that more than 70 percent of waste generated is household waste, which is a mix of organic, and non-organic waste, with some of the latter being recyclable.  Organic waste can be collected and used for fertilizer compost. At least 3 tons of organic waste needs to be available for scalable production of fertilizer – which can be used in maintenance of public parks, or even is sold in the open market.  Similarly, plastic, metal, wood, etc. can also be recycled once the investment is made in collection and sorting mechanisms.

On the economic front, it is estimated that average cost for collection and disposal of garbage in low-income countries like Pakistan is around USD 30 per ton – suggesting a daily cost of around USD 390,000, or annual outlay of USD 142.3 million.  On a household level, the average monthly cost for efficient garbage collection and disposal is estimated to be around USD 2.96, or roughly PKR 400 per month.  Although pricing is considerably for lower-income households, the same can be compensated by charging a higher price for higher income households, making the collection and disposal process self-sustaining, rather than being susceptible to budget allocation politics of provincial, and city governments.

Trash is gold, and it can be used for the generation of electricity through the waste-to-energy process.  It is estimated that approximately 2,200 tons of municipal solid-waste are required daily for the generation of 50 Mega-Watt (MW) of power. If only 40% of the garbage that is generated in the city is collected and used, it is possible to generate up to 100 MW of electricity.  As per NEPRA’s calculation for an upfront tariff of electricity, at an initial outlay of roughly USD 3 million per MW, or an investment of USD 300 million, it is possible to generate electricity from trash at a cost of PKR 12 per kilowatt-hour (kWh).

Development of an integrated solid waste management system, which can clean up the city while using the same garbage to generate electricity requires political will more than anything else.  Such a system will not only clean up the city but also provide an indigenous source of power.  A public-private partnership which has the support of all stakeholders of the city, and the province can do wonders, and sustainably resolve the garbage issue for the city.  However, without political will, there isn't much that can be done, and one of the largest cities in the world can continue to be an ever-expanding dump.