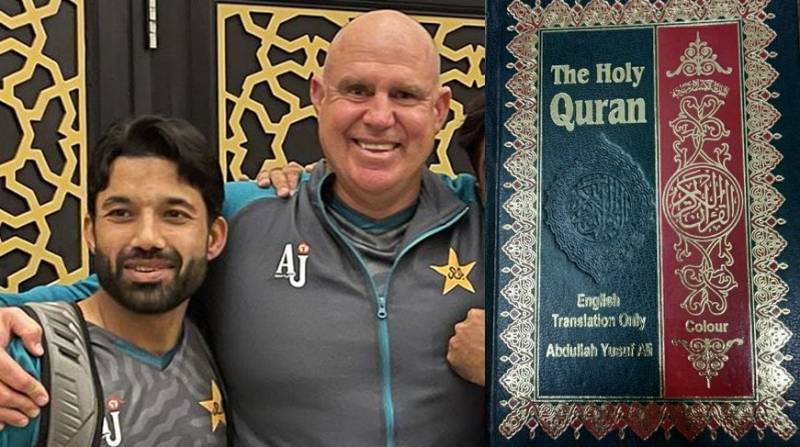 LAHORE – Pakistan's star wicketkeeper-batsman Mohammad Rizwan has finally disclosed the reason for presenting an English version of the Quran as a gift to legendary Australian batter and former batting consultant of Pakistan team, Matthew Hayden, during the T20 World Cup.

In November, Hayden shared his experience of spending time with the Pakistani players in the dressing room. He was particularly moved by the sense of togetherness and spirituality in the team.

The former coach had revealed that he sat down with Mohammad Rizwan and talked about Islam and the Holy Book, Quran.

“I am curious about Islam even though I am a Christian. One follows Christ and the other Mohammad (PBUH), and in a sense never shall meet, but he [Rizwan] presented me with an English version of the Quran. We sat on the floor for half an hour and talked through it. I am reading a bit of it each day. Rizzy [Rizwan] is one of my favorite individuals, a champion human being,” Hayden said.

In a recent interview, the opening batsman said that Hayden used to hold discussions with the players about Islamabad.

“One day during the world cup, I asked a person to bring an English version of the Quran and I took the Quran to Matthew Hayden’s room and presented him as a gift,” Rizwan said while calling it a “different moment”.

“It’s our job to choose what we like for ourselves and for others,” he said.

“When I talk to Matthew, he says he’s having a lot of fun and he often reads translations of the Qur’an,” he said. Rizwan said that Hayden had also appreciated the gift.

“In telephonic conversation, the former batting consultant told me that he enjoyed reading the translation of the Holy Quran” he said.

“Keep Methew Hayden remember in your prayers,” Rizwan appealed to the nation.

A video of Pakistan's brilliant wicketkeeper-cum-batsman, Mohammad Rizwan, has taken the internet by storm. In the ...