Sindh allows setting up of cattle markets under strict SOPs 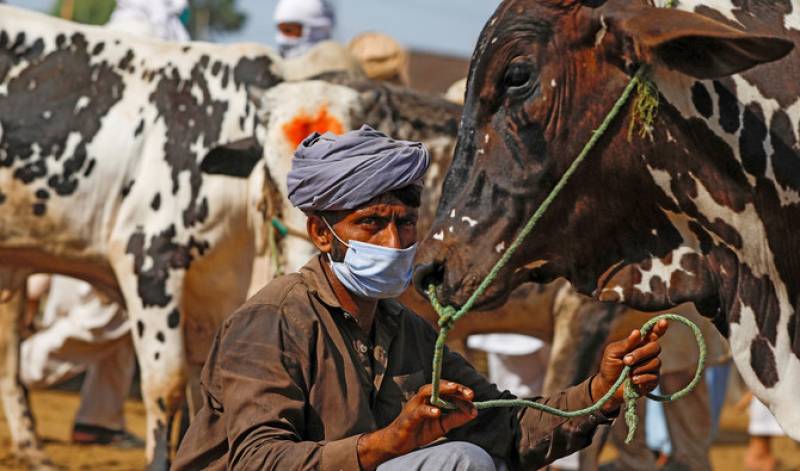 He took this decision while presiding over a meeting here at CM House, said a press release issued on Wednesday.

The chief minister was told that cattle markets have been allowed in other provinces of the country, therefore the organizers were approaching the Sindh government for grant of permission to set up the same in Sindh for sacrificial animals.

The chief minister said as a matter of fact he was against granting the permission to cattle markets because of COVID-19 pandemic. "Since, a religious aspect is attached with the cattle markets, therefore he is allowing their establishment but under strict SOPs to be issued by the provincial home department," he said and added "the children will not be allowed to visit these markets." The chief minister directed the health department to send their mobile teams to conduct COVID-19 tests of the cattle traders, organizers and the buyers.

Syed Murad Ali Shah directed the chief secretary to inform all the divisional commissioners to designate specific areas, preferably out of cities/towns, for establishment of the markets in their respective areas so that spread of COVID-19 could be avoided.

The CM also issued directives to all the deputy commissioners and SSPs not to allow traders to sell their cattle in streets or on the roads. "This will be dangerous and attract crowds of people, therefore this cannot be allowed," he said.

He also directed Sindh Minister for Local Government Syed Nasir Shah to designate union council-wise areas for sacrificing animals. "In such a serious situation of COVID-19, we can not allow slaughtering of animals in each and every street but there must be an appropriate mechanism and designated areas for the purpose," he said.

Sindh Minister for Health Dr Azra Fazal Pechuho told the chief minister that the coronavirus impact was on the decline but this did not mean that the pandemic was over. At this, the chief minister directed the health department to intensify testing in hot spot areas. "At least one person from each house must be tested in the areas where selective lockdown is imposed.

The chief minister was told that the tests in rural areas have been enhanced that was why detection rate has increased.

Syed Murad Ali Shah through the chief secretary directed the PDMA to start SMS service advising people of the province to test themselves, if they feel any of the coronavirus symptoms.