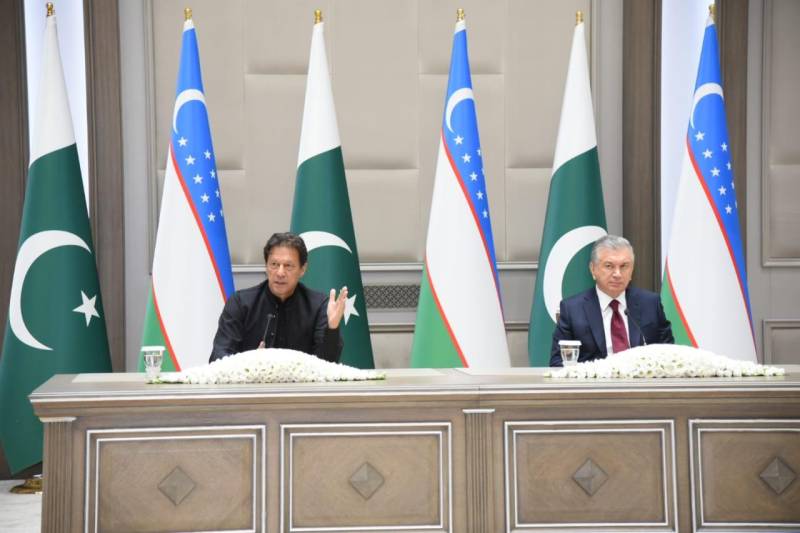 TASHKENT – Prime Minister Imran Khan emphasized on the urgent need for peaceful resolution of all outstanding regional disputes and conflicts to fully utilize the enormous potential of connectivity between Central Asia and South Asia.

The premier stated this during his ongoing two-day long visit to Uzbekistan, said a joint declaration after the premier held meeting with Uzbek President Shavkat Mirziyoyev and signed various bilateral agreements.

Both sides stressed the importance of regional integration and connectivity as a cornerstone of economic development and progress. In this regard, they welcomed the exchange of high-level visits in the areas of trade, railways, transport and aviation.

The leaders of the two countries exchanged views on the current status of bilateral relations in all areas of mutual interest and agreed to further strengthen their multifaceted ties in political, trade and economic, energy, communication, science and technology, education and cultural spheres.

The two leaders also exchanged views on issues of international and regional significance including the situation related to COVID-19 and agreed to build further cooperation in this regard.

Reaffirming their commitment to strengthening fraternal ties, based on religious, cultural and historical commonalities, the leaders expressed satisfaction at the continued progress in bilateral relations and announced the establishment of a strategic partnership for mutual benefit of the two countries and nations.

The leaders expressed satisfaction with the growing pace of inter-parliamentary cooperation and agreed on the regular exchange of parliamentary delegations to further deepen bilateral ties.

The premier underlined the importance of structured engagement between Pakistan and Uzbekistan under the five pillars of Pakistan’s “Vision Central Asia” policy i.e political, trade and investment, energy and connectivity, security and defence, and people-to-people contacts.

He also outlined his vision of “Naya” Pakistan embedded in values of social justice, education for all, peace, prosperity and economic development of the people.

The leaders expressed satisfaction at the level of bilateral cooperation within the framework of international organizations and reaffirmed their commitment to continue supporting each other in the UN, SCO, OIC, ECO and other international and regional forums on issues of mutual interest.

As members of the UN Human Rights Council, the Parties expressed their readiness for joint action to suppress violations of human rights and counter Islamophobia, as well as strengthening interfaith harmony.

The two sides noted with satisfaction that over the 20 years of its activity, the Shanghai Cooperation Organization (SCO) has taken a significant place in international and regional organizations, and contributed in promoting security, stability and sustainable development of the region.

The importance of further strengthening cooperation at the SCO and multifaceted cooperation between the member states were emphasized. In this context, the parties agreed to collaborate and support in promoting the initiatives of the two countries aimed at deepening interaction within the SCO.

The leaders discussed the security situation in detail in Afghanistan and the ongoing peace process. The parties stressed the necessity to resolve the conflict through Afghan-led and Afghan-owned political process through peaceful and inclusive negotiations resulting in comprehensive political settlement.

President of Uzbekistan highly appreciated the role of Pakistan in promoting the peace process in Afghanistan and Pakistan’s contributions to socio-economic development of Afghanistan.

Prime Minister of Pakistan hailed Uzbekistan's efforts for the socio-economic reconstruction of Afghanistan through the implementation of a number of significant projects, the main one of which is the construction of the Termez-Mazar-i-Sharif – Kabul – Peshawar railway.

Both leaders expressed their readiness to maintain a regular dialogue and build constructive cooperation in the field of security and defence. Expressing satisfaction with the level of cooperation between the Defence Ministries, the leaders agreed to continue cooperation in conducting joint military exercises and trainings, as well as in the field of vocational training and the exchange of professional expertise between the militaries of the two countries.

They expressed their readiness to expand cooperation between the law enforcement agencies of the two countries, in particular, in the fight against terrorism and drug trafficking.

Recognizing the enormous economic potential to further build up mutually beneficial relations, the parties agreed to increase the volume of bilateral trade through diversification of trade, expansion of business contacts, exchange of trade delegations and simplification of the visa regime.

The parties welcomed the signing of the Agreement on Transit Trade as an important tool for expanding bilateral trade.

Both leaders noted the importance of regular meetings of the Joint Uzbek-Pakistan Inter-Governmental Commission on Trade, Economic and Scientific and Technical cooperation.

The parties emphasized the role of the Joint Business Council between the two countries and agreed to establish direct business ties between Chambers of Commerce and Industry and the private sector. They also agreed to organize trade exhibitions and business forums on regular basis to promote bilateral trade.

The leaders recognized the necessity to create a more conducive environment for investors in the two countries, in particular, to encourage and facilitate joint investments, confirmed the existence of broad opportunities for cooperation in the fields of agriculture, pharmaceuticals, textile, leather and chemical industries, energy, and information technology and agreed to develop mutual cooperation in these sectors.

The parties highly appreciated the results of the Uzbekistan-Pakistan Trade, Investment and Connectivity Conference held on 15 July 2021 as instrumental in providing fresh impetus for further development of trade, economic and investment ties between the two countries.

The leaders stressed the importance of regional integration and connectivity as a cornerstone of economic development and progress. In this regard, they welcomed the exchange of high-level visits in the areas of trade, railways, transport and aviation.

The two leaders reiterated their support for the Termez-Mazar-i-Sharif – Kabul – Peshawar railway project as an important initiative to create a rail link from Central Asia to the Arabian Sea through Afghanistan and the Pakistani seaports of Karachi, Gwadar and Bin Qasim.

The parties also welcomed the proposed expedition of representatives of the relevant ministries and departments of Uzbekistan and Pakistan along the route of the railway line in near future with appropriate security measures for the representatives of both sides.

The two leaders also recognized immense potential of China-Pakistan Economic Corridor for the benefit of the entire Central Asian region and beyond entailing greater connectivity and trade linkages through a network of transport, fiber optic cable, energy pipelines, and investment opportunities in its SEZs.

The two leaders welcomed the resumption of direct regular flights between Pakistan and Uzbekistan.

President Shavkat Mirziyoyev and Prime Minister Imran Khan noted long-standing cultural, historical, religious and spiritual ties between the two countries. The leaders decided to further expand cultural ties and people-to-people contacts and welcomed proposals to develop cooperation between leading universities, research institutes, libraries and museums of the two countries, as well as to conduct joint research on the legacy of the Baburids.

The President of Uzbekistan highly appreciated the opening of Centers for the Study of the heritage of Alisher Navoi and Zahiriddin Muhammad Babur at the Punjab and Peshawar Universities of Pakistan and welcomed the establishment of cooperation with the Alisher Navoi and Babur Foundations in Uzbekistan.

The leaders reaffirmed to establish cooperation in the tourism sector, in particular, and recognized spiritual/Ziyarat tourism as a priority area of ​​common interest.

Both leaders expressed support for the joint initiatives and collective efforts of the OIC to promote a tolerant and enlightened Islam, welcomed the declaration of March 15th as International Day to combat Islamophobia, and agreed to work towards the designation of this Day by the UN General Assembly.

The parties, having highly appreciated the beginning of cooperation in academic and cultural research, agreed to early commencement of the work on the compilation of an Islamic Encyclopedia by Uzbek and Pakistani researchers and experts. They expressed confidence that the publication of this fundamental work will be a great contribution of Uzbekistan and Pakistan to the promotion of modern Islamic civilization and interfaith understanding and harmony.

The parties welcomed the signing of a number of important MoUs/Agreements, which will serve to further strengthen the comprehensive cooperation between the two countries in diverse areas.

The leaders expressed their conviction that the agreements reached during the visit will contribute to the further deepening of the bilateral strategic partnership and development of cooperation within the framework of multilateral formats. They agreed to continue high-level political dialogue in the future.

PM Imran Khan expressed gratitude to the Uzbek side for the cordial and warm welcome extended to the Pakistan delegation in Uzbekistan and invited the President of the Republic of Uzbekistan Mr. Shavkat Mirziyoyev to visit Pakistan at a convenient time. Uzbek side accepted the invitation with appreciation. The dates of the visit will be agreed through diplomatic channels.