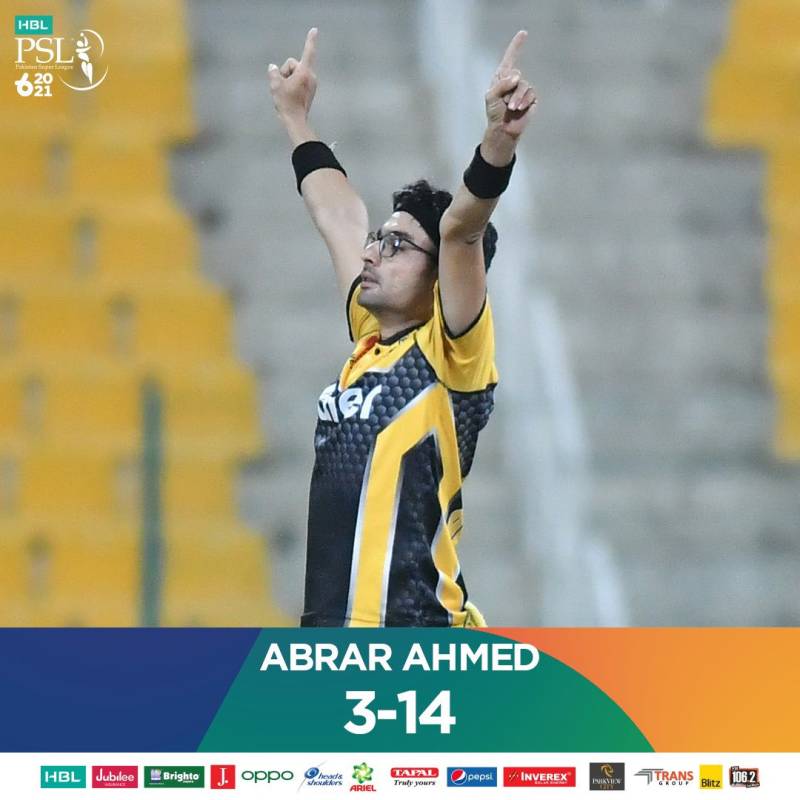 Kings set a target of 109 runs for Zalmi and the team completed the target in 11 overs.

Chasing the target, Zalmi lost Kamran Akmal to Aamir Yamin in the second over for 9 when he tried to drive him towards mid-off but instead, the ball hit his stumps.

The early wicket would have given hope to the Kings to make it a tough run chase for Peshawar.

However, Hazratullah Zazai and Haider Ali hit the Kings bowlers in all directions and left them helpless.

In the sixth over, Zazai completed his half-century off 17 balls to join teammate Kamran Akmal and Islamabad United's Asif Ali in holding the record for the joint-fastest half-century.

The Zalmi were looking good and could have defeated the Kings by nine wickets but late wickets by the Karachi bowlers reduced the margin.

It looked like Zazai would end the game unbeaten but Imad Wasim played spoilsport and dismissed the Afghan spinner in the ninth over for 63. In the same over, Kings captain dismissed Shoaib Malik after he tried to hit him a six to take his side closer to the finish line.

In the next over, Noor Ahmed dismissed Haider Ali to push them four down but the game had got already out of Karachi's hands.

In the 12th over, Ahmed bowled a wide that went for a four to give Peshawar Zalmi a win.

The victory has taken Peshawar to the number two spot on the points table and pushed the Kings down to number five.

In the first innings, Zalmi skipper Wahab Riaz led his bowlers to restrict Kings to 108 runs.

Riaz opened the bowling for his side and dismissed Babar Azam for a duck off the third ball in the first over.

And in the third over, Sameen Gul took consecutive wickets of Martin Guptill and Chadwick Walton to put the Kings at 12/3.

Sharjeel Khan's hitting in the next few overs helped the Kings improve their score and give them hope. Then Wahab dismissed the batsman for 25 in his second over after Sharjeel tried to hit him for a six at square leg.

At the end of 10 overs, Kings were 58/4 with Imad Wasim and Najibullah Zadran at the crease.

The two struggled to take off against the Zalmi bowlers and the pressure eventually piled up on the batsmen.

In the 14th over, debutant Abrar Ahmed dismissed Zadran and Yamin to push the Kings to 67/6.

Wahab brought himself into the attack in the 16th over and dismissed the Kings' captain Wasim, who was looking to use the last five overs to attack the Zalmi bowlers.

The Zalmi skipper gave Abrar the ball once again and the spinner dismissed Waqas Maqsood to put the Kings eight down.

In the 18th over, a lacklustre run by Mohammad Amir put the Kings nine down.

The side were looking to get dismissed under 100 runs but a late cameo by Abbas Afridi took the team to 108. The tailender ended the innings as the highest run-getter for his team in the match with 27 runs to his name.

For Zalmi, Wahab and Abrar took three wickets each and Sameen Gul ended the innings with two scalps to his name.

Earlier, Zalmi had opted to field first after winning the toss against the Kings.

The defending champs will want to make a strong comeback after last night's defeat. They will be batting first after @PeshawarZalmi won the toss and put them in.#MatchDikhao l #HBLPSL6 I #PZvKK pic.twitter.com/N9s0QfWHa6

Karachi Kings didn’t have a good start in Abu Dhabi and lost both the games in the past.

Kings currently have 6 points from 7 games after winning three and losing four matches.

On the other side, Peshawar Zalmi have won four in eight games it has played so far. Three of these games were in Abu Dhabi where the former champions were defeated twice. Their only win in Abu Dhabi came against Quetta Gladiators.