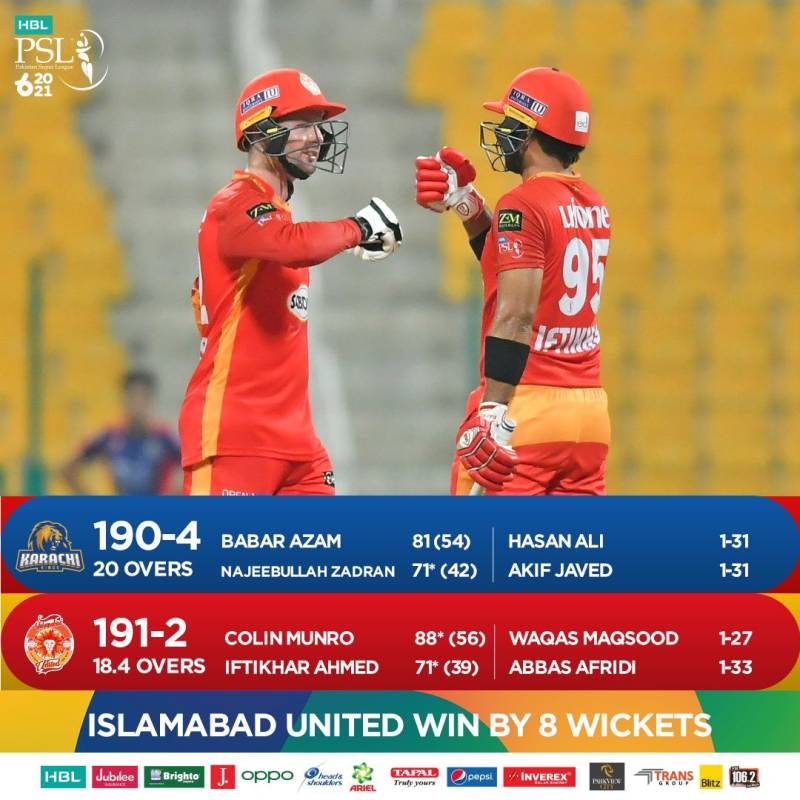 Powerful innings by Colin Munro and Iftikhar Ahmed powered Islamabad United to eight-wicket win over Karachi Kings in the 22nd match of the Sixth Edition of the Pakistan Super League 2021 at the Sheikh Zayed Cricket Stadium on Monday.

Munro and Ahmed remained not out, as they scored 88 and 71, respectively.

Abbas Afridi gave his team a breakthrough when he dismissed Khawaja for 12 in the fourth over. Waqas Maqsood took Muhammad Akhlaq's wicket in the next over to build up the pressure, but it could not help their team win.

Azam (81) and Zadran's (71) 117-run partnership helped Kings put up a competitive score against the Shadab Khan-led side.

The Kings started off steady, but it did not last long, as Akif Javed dismissed Sharjeel Khan (25) in the fourth over, while Mohammad Wasim bowled Martin Guptill (6) in the seventh over.

However, Azam and Zadran became the torchbearers for the Kings, till Hasan Ali dismissed Azam.

Islamabad United were confident to win the match as they bagged two back-to-back victories in the last couple of matches. They made a stunning comeback after Lahore Qalandars trounced them in the first match after the Abu Dhabi-leg resumed.

Defending champions Karachi Kings were struggling to improve the ranking

ABU DHABI – In a major boost for Islamabad United, star player Hassan Ali has decided not to pull out of the ...