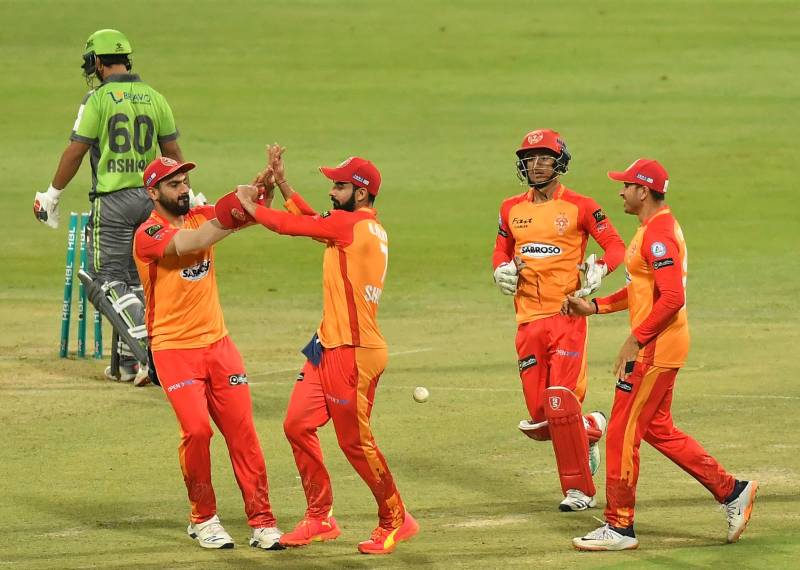 ABU DHABI – Islamabad United beat Lahore Qalandars with their brilliant performance with the bat and the ball in match number 20 of the sixth edition of the Pakistan Super League (PSL) at Abu Dhabi’s Sheikh Zayed Stadium on Sunday.

Islamabad United won the toss and decided to bat first. They set a 153-run target for Lahore Qalandars to chase.

At the beginning of the chase, it seemed Lahore would cruise to victory when Sohail Akhtar and Fakhar Zaman opened the innings and took their side to 55/0. However, Fawad Ahmed bowled the Qalandars captain for 34 on the last ball of the powerplay.

Zeeshan Ashraf then followed his skipper to the dugout after five balls. He was given run out due to a mix up between him and Zaman. With the fall of the wicket, Lahore were 58/2.

Then a double-wicket over by Mohammad Musa started turning the tide in favour of Islamabad. Musa, in the 11th over, dismissed Mohammad Hafeez and Ben Dunk within two runs to bring his side back in the game.

Veteran Mohammad Hafeez was caught at point by Hussain Talat and Ben Dunk was dismissed after he edged a ball to the wicketkeeper.

When Musa was asked to bowl the 13th over, he took the crucial wicket of Zaman. The opener was caught when he tried to hit a six to the third man.

After Musa, Shadab bowled the 14th over and took wickets of Tim David and Rashid Khan to expose Lahore's tail.

In the 14th over, Shaheen Shah Afridi and James Faulkner were sent back to the pavilion. The dismissals put Lahore at 100/9 at the end of the 15th over.

At that point, the Qalandars required 53 runs from 30 balls while Islamabad needed one wicket to win. Islamabad made sure there were no twists in the tale by taking Lahore's last wicket at the second ball of the 18th over to wrap up the game. 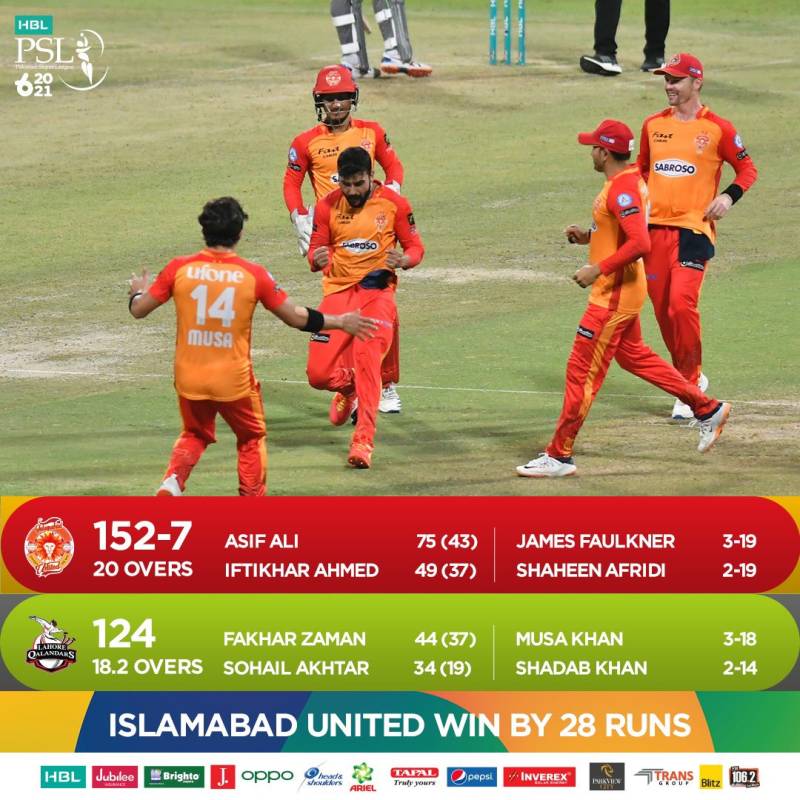 The win has propelled Islamabad United to the top of the table and pushed Lahore to the number 2 spot.

Earlier, a record-breaking 123-run partnership between Asif Ali and Iftikhar Ahmed took Islamabad United from 20/5 to 152/7.

Shadab was hoping that his openers would give his team a flying start when he chose to bat first but the Lahore bowlers did not allow them to get away in the powerplay.

Shaheen Shah Afridi dismissed Usman Khawaja with the third ball of the match. The United opener was hoping to flick the ball towards midwicket but instead, he edged the ball to Qalandars wicketkeeper Ben Dunk.

Later, James Faulkner took the wickets of Rohail Nazir, Colin Munro and Hussain Talat to put Islamabad at 20/4 at the end of the powerplay.

After Shaheen and Faulkner's magic with the ball, Haris Rauf decided to join the party. Rauf took the wicket of Shadab to push United to 20/5.

However, despite the loss of five wickets, Asif Ali and Iftikhar Ahmed took it upon themselves to lead United's batting. A quick-fire 50 by Asif along with Ahmed's support pushed United past 143 runs.

The two in the innings also made the record for the highest sixth-wicket partnership in PSL history. They had a partnership of 123 runs before Asif got himself hit wicket in the 18th over. The batsman was dismissed for 75.

On the other hand, Ahmed missed out on his half-century by a run after he was caught by Rashid Khan at long-off from the second last ball of the innings.

For Lahore, Faulkner ended with three wickets, while Shaheen and Rauf took two wickets each.

Previously, Islamabad United got defeated as Qalandars had won both the games since the start of the remaining matches.

Qalandar performed well under Sohail Akhtar’s captaincy as they thrashed Peshawar Zalmi when victoriously defended a score of 170/8 and acquired by 10 runs.

Shadab-led Islamabad will also bank on the fact that it has a record of 8-3 against Lahore Qalandars in 11 matches the two sides have played against each other in the PSL, so far.

In another blow for United's, key player Hasan Ali decided to travel to Pakistan and will miss the entire League for ‘personal reasons’, it emerged Saturday.