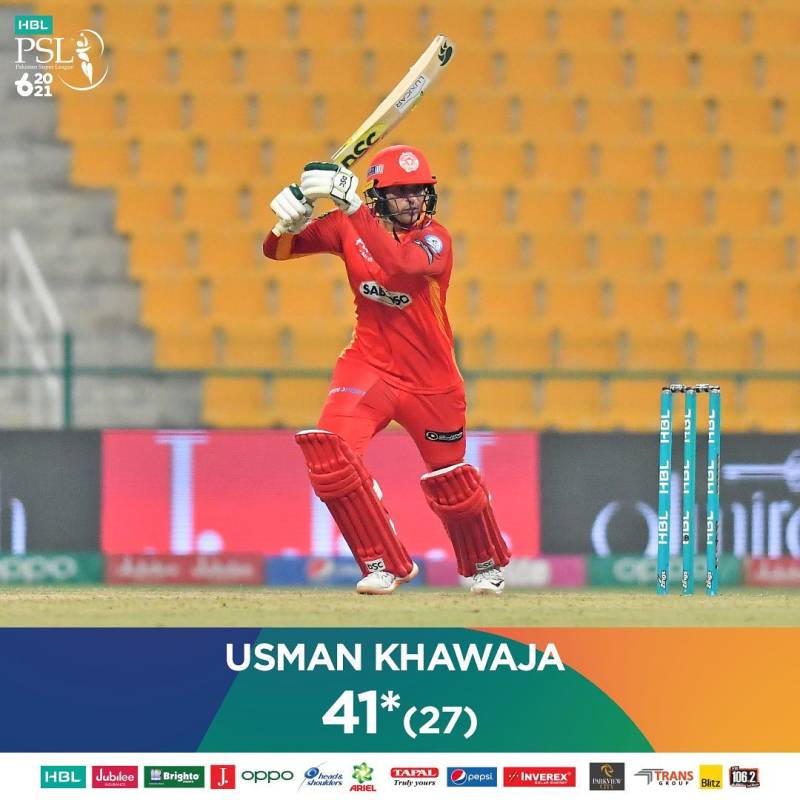 Also, Islamabad United put up the highest Powerplay total in PSL history as Islamabad ran up 97 in the first six and Munro brought up his half-century in 20 balls. He would go on to finish unbeaten on 90 from 36 deliveries.

Aside from the first over of the game, where Hasan Ali sloppily conceded 15, United were on top from start to finish. Akif Javed and Mohammad Wasim kept things tight and made regular inroads, while Mohammad Musa weathered a couple of huge sixes from Andre Russell to come back and dismiss the Gladiators' star man the same over.

More worryingly, though, he struck Russell on the head a couple of balls earlier, leading to a lengthy concussion test. Russell would not return to the field all match, and footage later showed him being stretchered to hospital.

Earlier, with an impressive performance by bowlers, the Islamabad United managed to restrict Quetta Gladiators to 134 runs in the first innings of the 18th match of the Pakistan Super League (PSL)’s sixth edition at Abu Dhabi’s Sheikh Zayed Stadium on Friday.

The Gladiators were asked to bat first after United won the toss.

South Africa's Faf du Plessis and young player Usman Khan opened the batting for the Gladiators but the former failed to perform as he was removed by Mohammad Wasim for 5 runs.

Usman took a good start as he smashed Hasan Ali for 14 runs in the first over of the game before he was dismissed by Shadab Khan.

After suffering the initial setback against Lahore Qalandars, Shadab Khan’s Islamabad United will be aiming to recover in this match, while Gladiators will be in action for the first time in Abu Dhabi.

The Quetta Gladiators are the bottom-placed team in PSL 2021. They won only one of their first five matches before the event was suspended when they had defeated Multan Sultans by 22 runs as Usman Khan hammered 81 in the last completed match in Karachi.

The Gladiators will be relying on Andre Russell, Sarfaraz Ahmed, Faf du Plessis and Azam Khan as they cannot afford another defeat in the tournament.