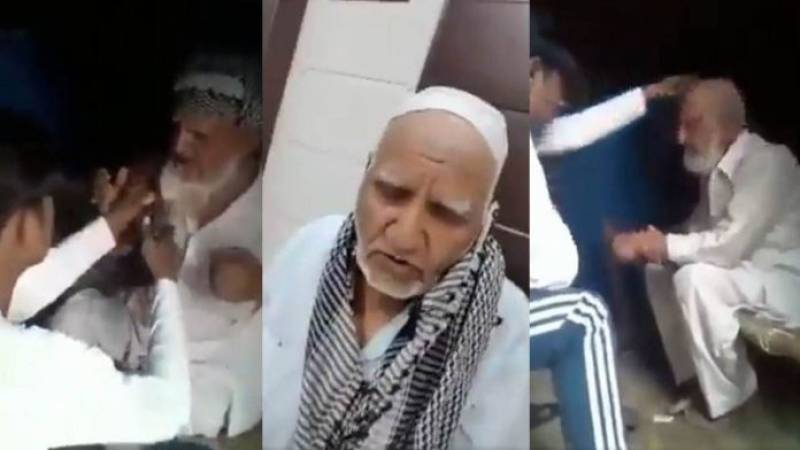 NEW DELHI – In another gruesome incident in the Indian state of Uttar Pradesh, a group of Hindu extremists lynched a senior citizen and forced him to shave his beard and chant Hindu slogans.

Reports cited that the man who is identified as Abdul Samad Saifi, 72, was allegedly attacked by at least two people and forced to chant ‘Jai Shri Ram’ on June 05.

The elderly victim confirmed that there were at least five attackers, adding that they put a gun to his head, threatening to kill him. The attackers told Saifi that they had killed many Muslims before, he alleged.

In the heart-wrenching footage of the incident that has gone viral on social media, at least two men can be seen attacking him with wooden sticks and then taking scissors to his beard and crudely cutting it off as the old man tries but fails to resist.

Local law enforcers while speaking with the press reporters said the clip was uploaded on social media a few days ago and it shows a man hitting the senior citizen and trying to cut off his beard as the elderly man tries to evade the blows.

DADRI (Web Desk) - A forensic test has proven that the meat that the Dadri lynch mob found in Mohammed Akhlaq's fridge ...

The statement of cops quoted by Indian media said ‘One of the accused has been identified as Ghaziabad resident Pravesh Gujjar, who has been arrested’.

This is not the first such incident in the so-called world’s largest democracy as a Muslim teenager was allegedly set on fire by a gang after refusing to chant a Hindu slogan in Uttar Pradesh back in 2019.

CHANDAULI - A 15-year-old Muslim teenager was allegedly set on fire in Chandauli district of Uttar Pradesh, India after ...