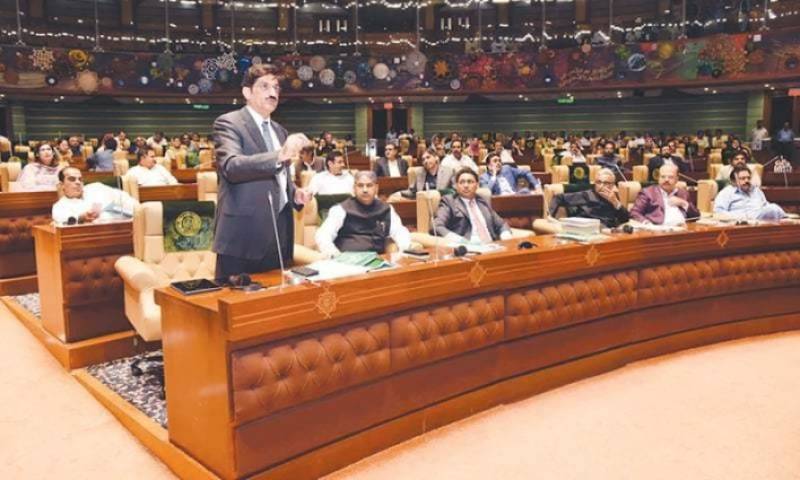 KARACHI – Chief Minister Sindh Murad Ali Shah presented the budget for the next fiscal year 2021-22 in the Sindh Assembly on Tuesday.

As PPP-led government presents the budget, opposition parties can be seen creating ruckus in the assembly.

#Sindh Cabinet has approved an increase of 20% in the salary of Govt employees & also set the minimum wage at 25,000 in the province. No new tax is being introduced by #SindhGovt #SindhBudget

Shah said that the Sindh government imposed no new tax in the budget, while Rs105 billion has been proposed for law and order, Rs172 billion for health, Rs215 billion for school education and Rs25 billion for college education.

Murad said the $400mn had been estimated as the total cost of Sindh Human Capital Projects, which he said is a comprehensive package by the World Bank in collaboration with the Sindh government.

Shah announced earmarking an amount of Rs3 billion for industrial development through small and medium-sized enterprises (SMEs), Rs3.20 billion for education, Rs2 billion for low-cost housing units, Rs1.70 billion for IT sector, and Rs 16 billion for social welfare projects for the citizens.

Earlier in the day, the Sindh cabinet on Tuesday approved the provincial budget for the fiscal year 2021-22 with an overall outlay of Rs1.47 trillion.

Chief Minister Syed Murad Ali Shah presided over a special meeting of the provincial cabinet to discuss and approve the budget 2021-22, which he unveiled in the Sindh Assembly session later today.