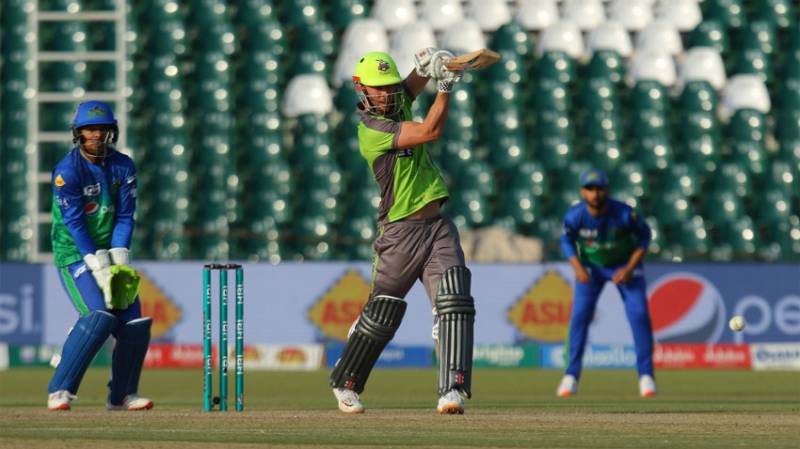 LAHORE – Blazing knocks from openers Chris Lynn (113 not out) and Fakhar Zaman (57) overhauled a big total by Multan Sultans for the loss of only one wicket and catapulted Lahore Qalandars to a maiden semi-finals spot in the HBL Pakistan Super League 2020.

Chasing a target of 187 runs in their final group match against the table-leaders Multan Sultan, Lahore Qalandars reached 191 for the loss of one wicket in 18.5 overs. Qalandars Opener Chris Lynn played a power-packed innings of 113 not out and hit back to back sixes in the penultimate over of the match.

Chris Lynn (113 not out with 12 fours and 8 sixes) and Fakhar Zaman (57 off 35 balls with 7 fours and 2 sixes) blew away second-sting Sultans bowling attack as they partnered for 100 runs in 9 overs. Sohail Akhter (19 off 23 balls), after the fall of Fakhar, played second fiddle to Chris Lynn and ensured Lahore Qalndars do not lose another wicket.

Debutant Usman Qadir returned with the best bowling figures for Multan Sultans with 24 runs for 1 wicket in his four overs while all other bowlers were taken apart by the chief decimator Chris Lynn and Fakhar Zaman. Fakhar Zaman, by far, played the most fluent innings in the HBL PSL V.

Multan Sultans, who are table leaders and were the first to qualify for the semi-finals this year, had rested Sohail Tanvir, Muhammad Irfan, Shahid Afridi and Imran Tahir while Asad Shafiq and debutant Usman Qadir were included in the side to play their first match in the HBL PSL V.

Chris Lynn scored third century of the HBL PSL V while Rilee Rossouw of Multan Sultans and Kamran Akmal of Peshawar Zalmi are the other centurions this year.

Earlier, on a hot spring afternoon with the mercury rising to 24 degree Celsius at the Gaddafi stadium, Khushdil Shah added to the heat for Qalandars with his fireworks as he played a gem of a knock of 70 (not out) runs off 29 balls to post a big total of 186 runs in 20 overs. Khushdil Shah’s innings was laced with 5 fours and 6 sixes and plundered 77 runs in the last five overs against Lahore Qalandars bowlers.

Multan Sultans could score only 79 runs in their 11 overs when Shan Masood fell after scoring 42 off 29 balls. Ravi Bopara played a responsible innings but got out for 33 runs in the 13th over. Asad Shafiq could only score 1 before he was run out.

Sultans were precariously placed at 95-5 at close of the 14th over their innings when Khushdil Shah joined hands with Rohail Nazir (24 off 17 balls) to hit 91 runs of the last six over of their innings.

The Sultans got to the worst start in the tournament as they lost both the openers within the power-play due to some miserly bowling by Shaheen Shah Afridi (2 for 23) and Muhamamd Hafeez (1 for 22) off their quota of four overs each.

Haris Rauf was the most expensive of the Qalandars bowlers and gave away 50 runs in 3 overs. Khushdil Shah was especially harsh on him and hit three 6s off Haris Rauf’s 3rd over. David Wiese also picked 2 wickets off 24 runs.

Centurion Chris Lynn was judged man of the match for his match winning innings 113 not out.

With the victory against Multan Sultans, Lahore Qalandars have moved to the 3rd place on the points table and would meet second placed Karachi Kings in the second semi-final at the Gaddafi stadium on March 17 (Tuesday) at 07:00 pm.

Table leaders Multan Sultans will play the first semi-final as the same venue on March 17 at 2:00 pm but their opponent will be either Peshawar Zalmi, who are currently placed fourth with 9 points, or Quetta Gladiators who are placed 6th with 7 points and are yet to play their last group match against Karachi Kings this evening.

The Quetta Gladiators have remote chances of qualifying for the semi-finals as their run-rate in -1.52 and even a victory might not help their cause.