Pakistan all out for 236 in 2nd Test against England 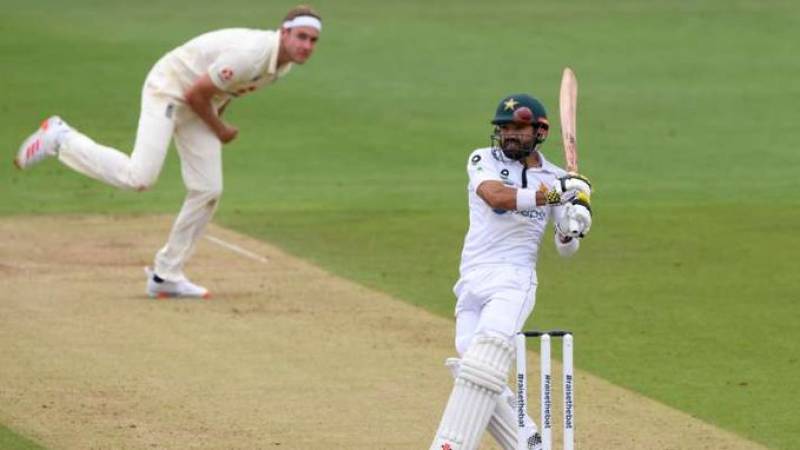 SOUTHAMPTON – Mohammad Rizwan top-scored with 72 as Pakistan were eventually dismissed for 236 in their first innings on the fourth morning of the weather-interrupted second Test against England at Southampton on Sunday.

Pakistan resumed on their overnight 223-9 after rain had washed out the whole of the third day's play.

Rizwan was then 60 not out -- his second fifty in eight career Tests following his 95 against Australia in Brisbane in November.

And there was a further delay to the scheduled 11:00 am (1000 GMT) start when, despite having had hours to prepare for the possibility, a member of the ground-staff was summoned to bring out sawdust for the bowlers' run-ups.

Rizwan, in partnership with dogged tailender Mohammad Abbas (two off 20 balls), had taken Pakistan past 200 in a ninth-wicket after they had come together with the tourists struggling at 176-8.

Rizwan, on another overcast morning, with the Ageas Bowl floodlights on, made his intentions clear by charging down the pitch to Sunday's first ball of the day from James Anderson, swinging wildly and missing.

The wicketkeeper did, however, make contact when he sliced a drive off Anderson over the slips to the third man boundary.

Rizwan also square-cut Anderson for a well-struck boundary before he was last man out when, aiming legside off Stuart Broad, he got a leading edge and was caught in the covers by Zak Crawley.

Broad, who had already become the first England bowler since off-spinner Graeme Swann 11 years ago to take three wickets in seven consecutive Test innings, led the attack with 4-56 in 27.2 overs.

- 'Frustrating' - Broad has taken 26 wickets in four Tests so far this season at a miserly average of 12.38.

"It's been very frustrating," England wicketkeeper Jos Buttler told Sky sports before Sunday's play started when asked about the delays.

"You just want to get out and play, get the game moving forward, we're into day four and we're still fielding in the first innings.

"Now we've got the floodlights, we play more cricket than we used to but it is still not perfect." Buttler added: "The colour of the ball is quite dark and with player safety, I don't think there is a perfect answer. At times umpires are an easy scapegoat."Pakistan, 1-0 down in a three-match series after their three-wicket defeat in the first Test at Old Trafford last week, were also indebted to Abid Ali (60) and Babar Azam (47) for painstaking innings when the conditions were stacked against the batsmen.

Victory in this match will see England secure their first series win over Pakistan since 2010.