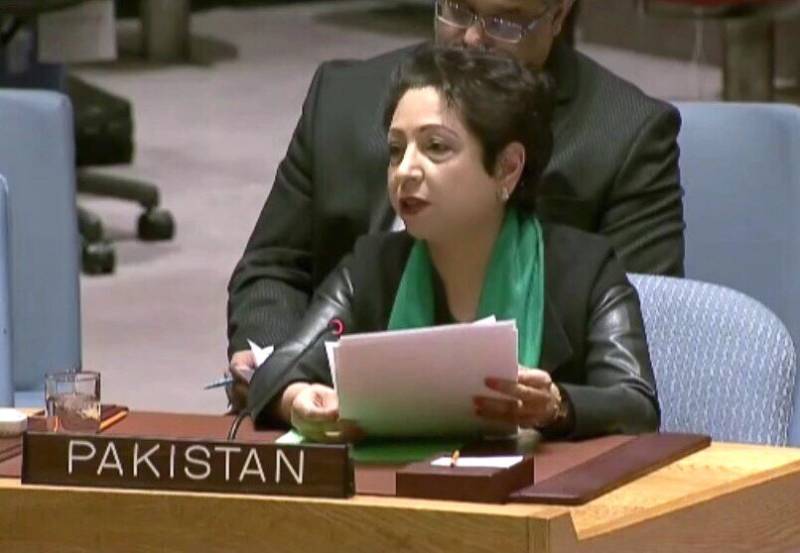 Lahore (web Desk) - At the Security Council, Ambassador Maleeha Lodhi urged the UN to guarantee the right of self determination to people living under foreign occupation if Charter principles are to have meaning. "Unless the rule of international law is applied, people's expectations of justice and fairness from the UN will remain unmet."

Speaking in the Security Council Debate on the UN Charter and Maintenance of Peace and Security, Pakistan’s Permanent Representative regretted that Charter principles were flouted in pursuit of narrow “national interests” by the powerful.

She said that Member States solemnly entered into this Covenant 70 years ago with the trust that these principles are immutable. Instead she added "We see unilateralism and arbitrariness in consequential decisions of war and peace.”

"We see unwarranted foreign adventures and then we also see their unforeseen and unintended but devastating consequences”.

Ambassador Lodhi said that failure to deter illegal use of force has created impression that UN has become instrument of the powerful, not guardian of international law tenets.

She said that the UN Charter does not just collectively bind us to efforts aimed at saving us from the scourge of war but also a shared commitment to create a world order based on the rule of law.

Ambassador Lodhi said failure to accomplish this will not only endanger the progress achieved in previous years but also risk making the “institution appear irrelevant” in a world marked by increasing turmoil and trouble, where insecurity prevails and injustice persists.

The Pakistani envoy called for a world order based on justice and respect for obligations arising from treaties and other sources of international law, and most critically, the purposes and principles of the Charter itself.

She pointed out that the world was hardly at peace today as conflicts abound, human rights abuses remain rampant and humanitarian law is flouted in open violation of the Charter’s principles.

Ambassador Lodhi said “Today, we reaffirm our commitment to the UN Charter because we continue to think that adhering to these principles will save us from the scourge of war”.

She concluded by pledging Pakistan’s commitment to translating its trust in the UN Charter into practice.