Last week Daily Pakistan published some of the astonishing new channels ratings ever of different programs aired at different time slots. They might have come like a huge surprise to many media channels, media houses and general audience.

The race of rating is real and certain channels and programs go to any extent to catch the highest position in rating. Our ratings are based on data provided by the Pakistan only media rating agency, Kantar Media (Media Logic). They provides ratings of different TV channels and programs based on which show is being watched the most at any given time. Kantar Media collects this information through specialized devices installed on televisions in homes throughout Pakistan. These ratings are a basis for advertising tariff and volume, hence very important for these TV channels.

This is our second week to this rating chart presentation. We have made a graphical represntation of the actual ratings of TV channels and their shows, as reported by the ratings agency. These are easy to understand for everyone and one can easily compare who is leading the race of rating with a huge margin.

The graphs below show ratings of different TV channels at different times of the day. These graphs show the average rating of each show in the given time slot. Ratings for weekdays and weekends are shown separately.

* Ratings provided from 1st to 7th February, 2016. Daily Pakistan will keep on providing similar TV channels ratings for every week, so stay tuned.

Programs that are aired in week days (Monday to Thursday) 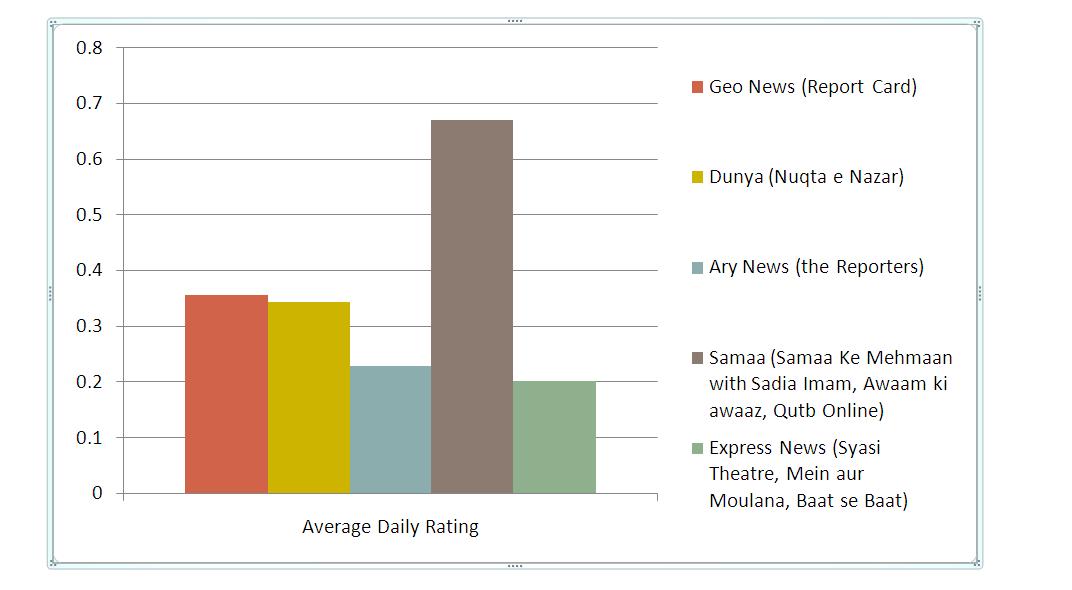 In the 7pm to 8pm time slot on weekdays, Samaa took a lead over Dunya this week. Samaa received the highest ratings which shows crime show popularity. They surely are an addiction. 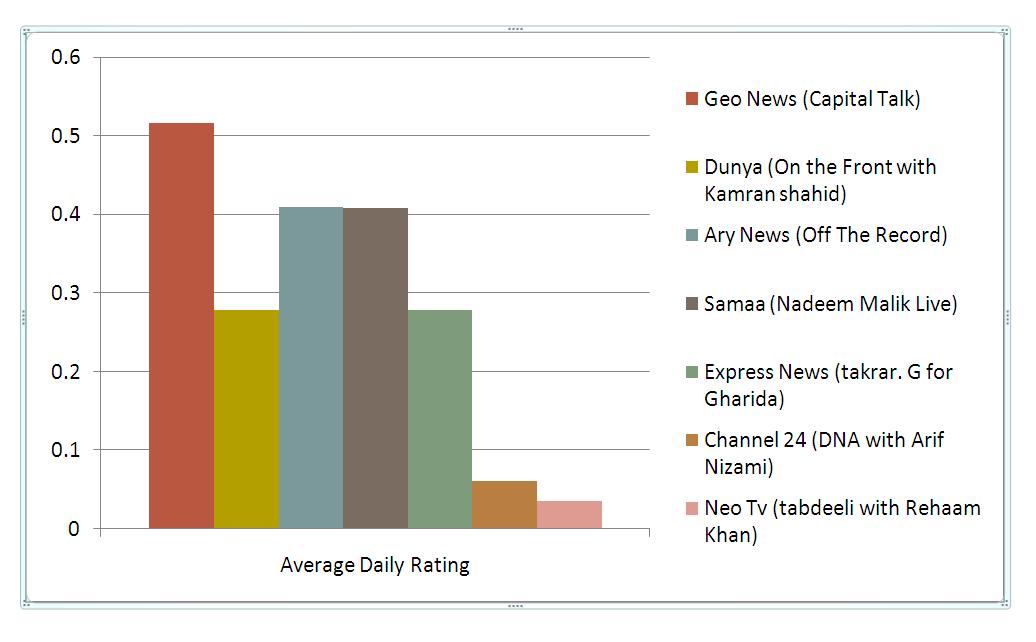 In the 8pm to 9pm time slot on weekdays, Capital Talk on Geo is a sure win. Ary and Samaa are next on then list giving each other a tough call for competition. 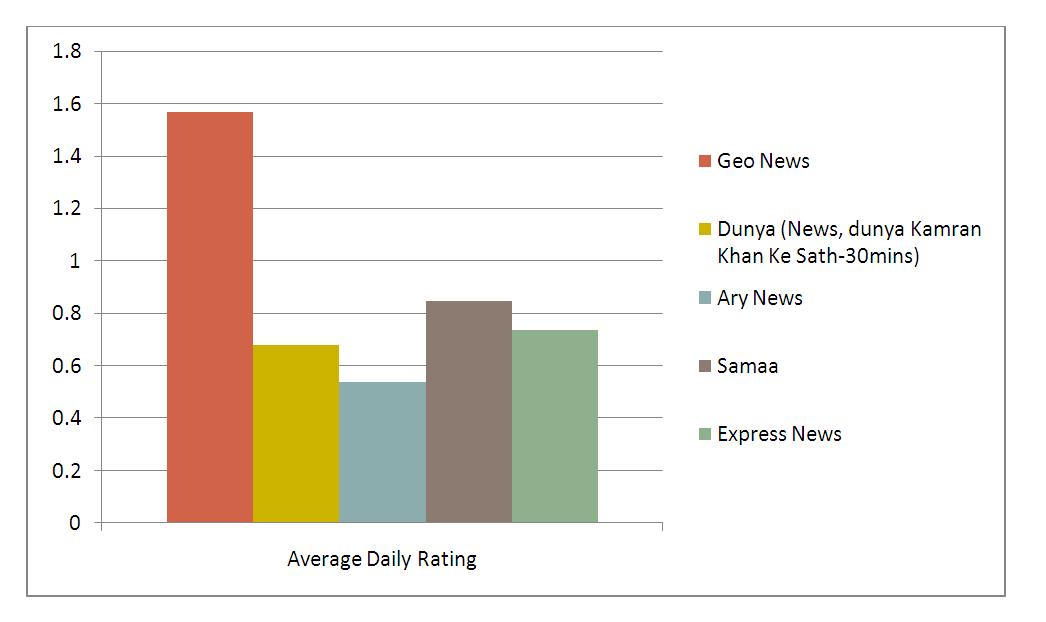 In the 9-10pm time slot, Geo News once again wins this week by a wide margin. This one hour is alloted to news on all channels, Geo news being on top shows that most people prefer Geo’s new bulletin above all others 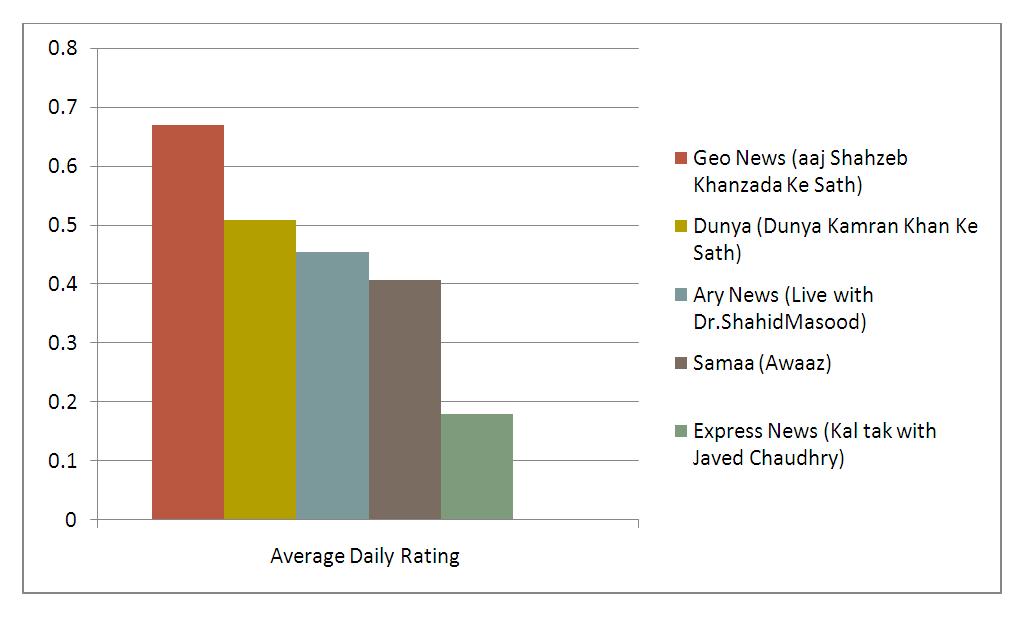 In the 10-11pm time slot, Geo News is on lead with ‘Aaj Shahzeb Khanzada k saath’. 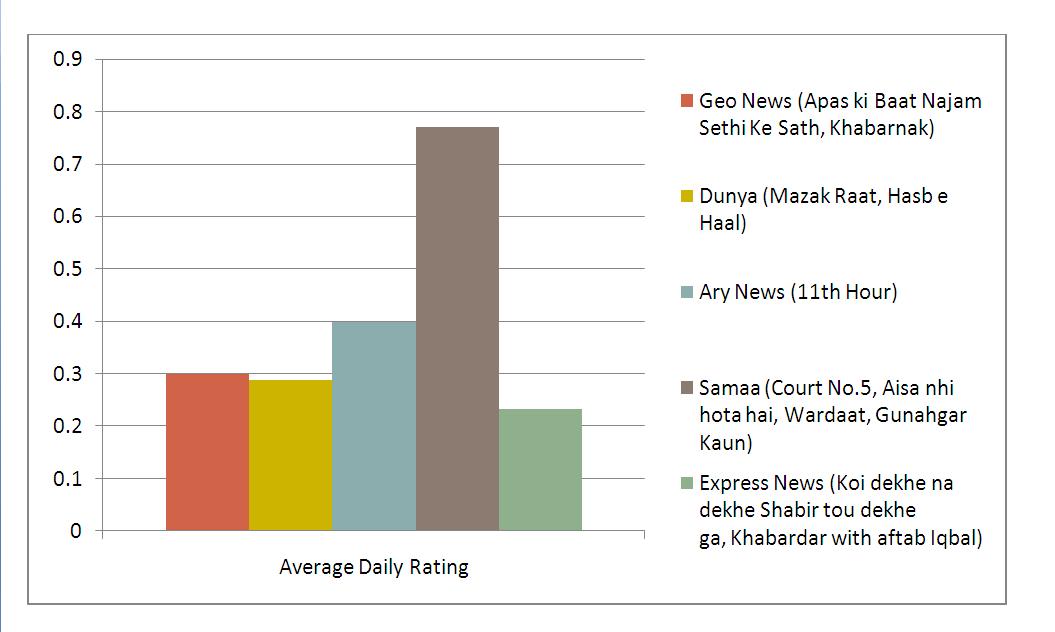 From 11pm to 12 am, Samaa is leading with a very wide margin that is a proof to the popularity of crime shows.

Programs that are aired on weekend (Friday, Saturday and Sunday) 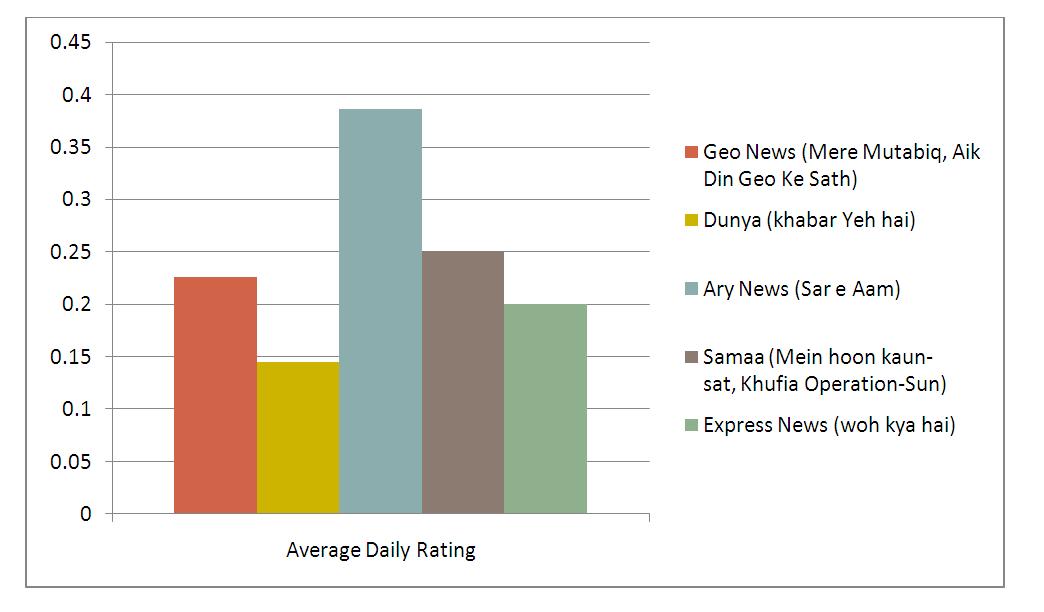 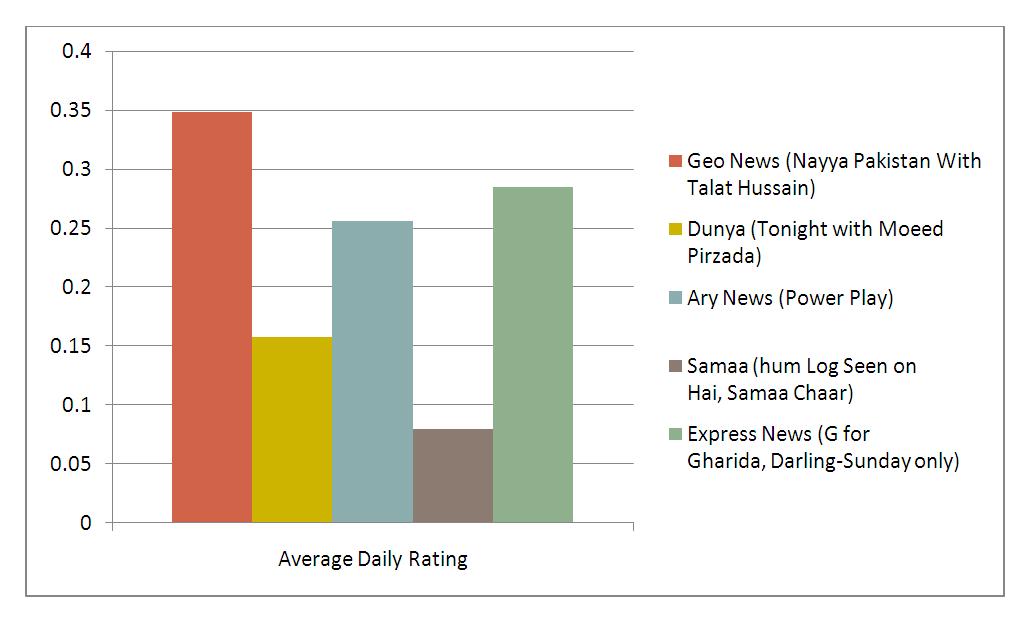 On weekends, Nayya Pakistan with Talat Hussain on Geo is being watched the most this week. 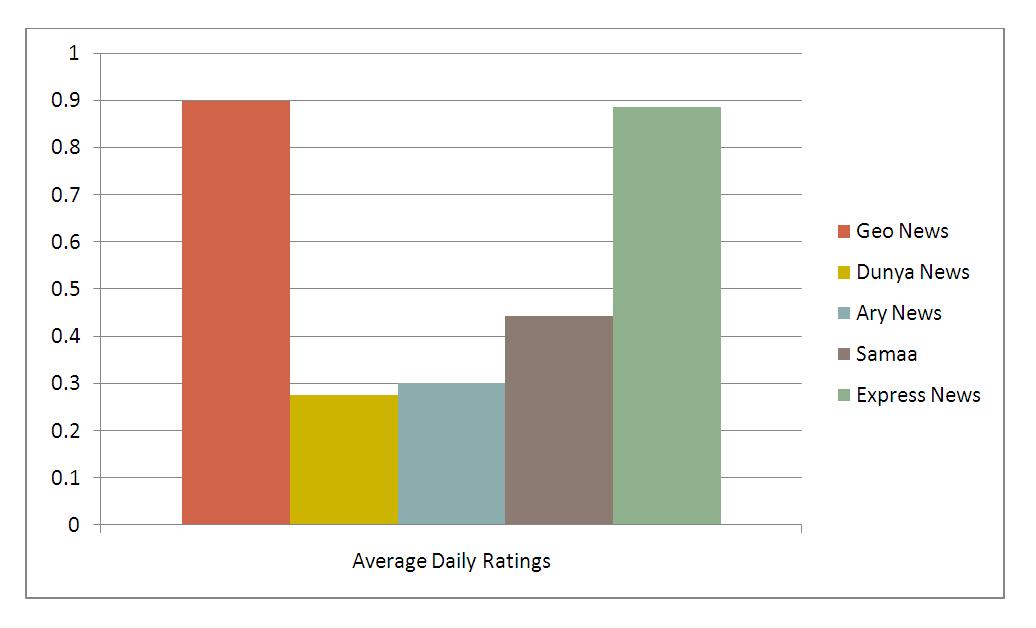 People give preference to watching news on Geo, the second most watched channel for news is Express this week. 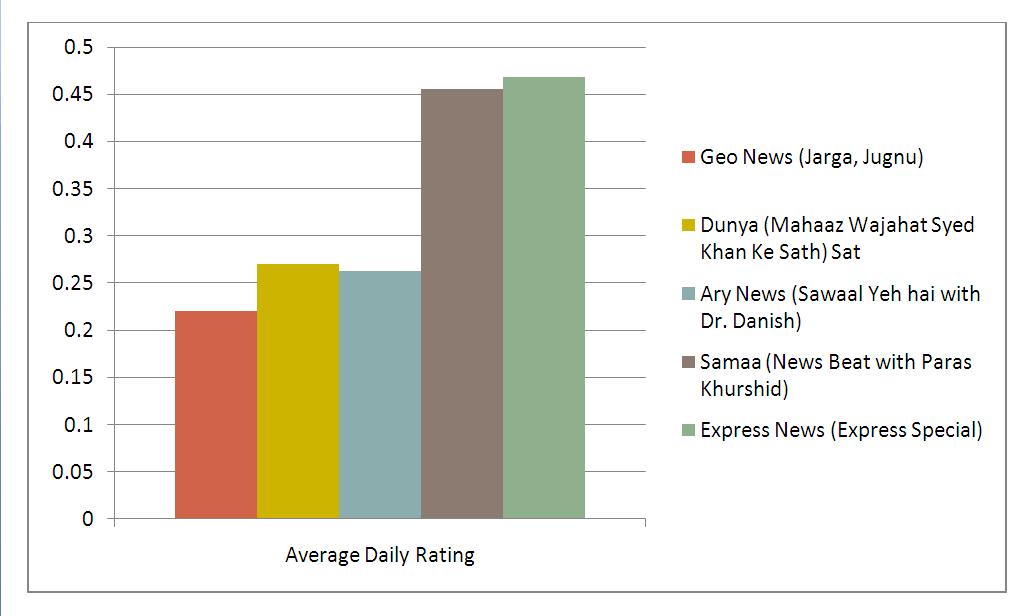 10pm-11pm time slot on weekends made a  mark with Express Social on top. Express News wins with a little margin from Samaa. 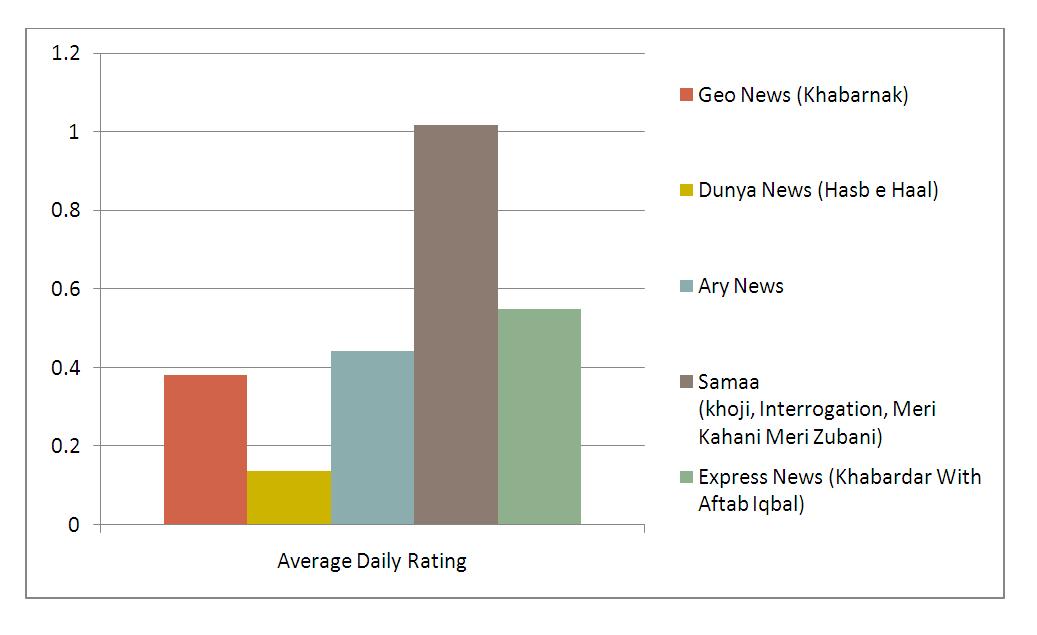 In this hour of the weekend Samaa is watched the most which sure is a proof that people love watching crime shows reenactments.