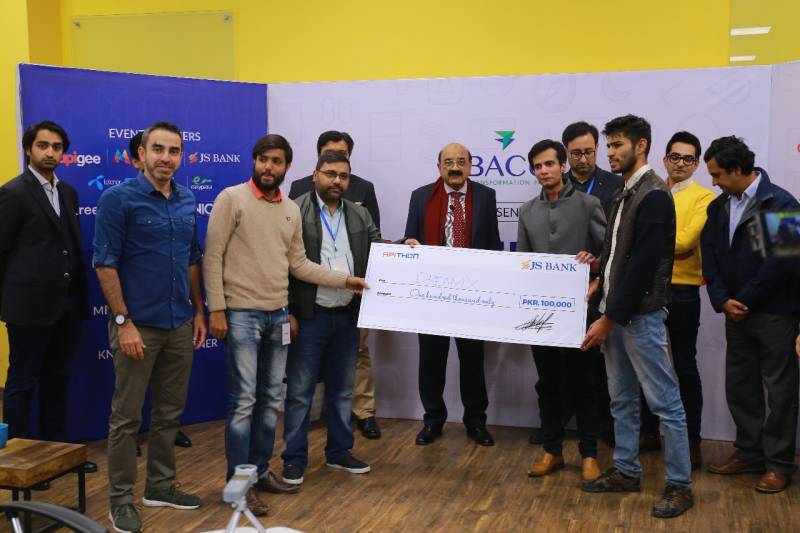 LAHORE - Twenty-three tech genius from across the country took part in APIthon at the National Incubation Centre of the Lahore University of Management Sciences (LUMS) to come up with as many applications using the application programming interfaces (APIs).

The two days event was held by Abacus Consulting with Momentum Tech Conference and other private partners in the Punjab's capital city on Saturday and Sunday.

“Such hackathons are the need of the hour as they benefit the service sector, tech teams and the public at large,” said Amir Jafri, the founder of the Momentum Tech Conference.

The mega event - Momentum Tech Conference - is being held in Karachi on February 19 and 20 where tech startups and entrepreneurs will be interacting with delegates from across the world.

The delegates include representatives from Facebook, Amazon Web Service, Apigee, Microsoft, Zapya among so many, who will share their resources and tools with Pakistani startups and entrepreneurs and mentor them to reach the international markets.

In the APIthon, tech wizards came up with solutions for payments to boost the digital economy for different services using the APIs of local companies.

“We're trying to bring about a change in the culture and have convinced several companies and startups to create a greater level of connectivity through opening their APIs to other startups,” Amir Jafri said, adding that tech teams were stressed to come up with innovative solution, instead of reinventing what already had been in place.

He detailed the tech innovation did not happen in isolation, as Facebook and Instagram had grown because of the partnership of private sector and entrepreneurs, and this culture, early resisted, was gaining acceptance in Pakistan as well.

"There are still miles to go as out of the 220 million people, around 200 million people do not use banking services for financial transactions and prefer dealing in cash, which shows there is lots of room for technological interference in 200 million lives."

The co-author of "New Success Secrets" and "L.E.G. Formula”, and the founder of Global Social Entrepreneurship Foundation, Muhammad Siddique from Atlanta (Georgia) said promoting the culture of APIthon in Pakistan would create foundation platform for tech startups to born and is a great welcome step for Pakistan. This creates the level playing field for developers community which is the foundation of the long-term growth of tech job market. and for that Momentum Pakistan - 2018 is the place to connect with world best mentors happening on Feb 19-20 at Karachi Expo Centre, he added.

Abbas Ali Khan, managing director of Abacus Consulting, said that any transaction which involved digital connections was is a digital asset. “Even if it is not conducted digitally, it is done through cash and someone catches that transaction on the counter, it leaves a digital footprint and it can be classified as a digital asset, thus reusable,” he said, referring to APIs — digital assets which are reusable.

The APIthon rewarded the tech wizards with rewards. The Dream X won Rs100,000 from the JS Bank and a direct entry to the second round of Telenor Velocity Prorgramme. The first runner-up was the Repairwala. They won Samsung Smart Gear and VR headsets from the Telenor Bank. The second runner-up e-Khata won VR headsets while That’s Bike It team won a special prize.

Such tech startups would be invited to the mega event of Momentum Tech Conference in Karachi, where they would have access to representatives from the Toronto-Waterloo region, often referred to as the Silicon Valley North and home to thousands of tech startups and international companies, for visa and licensing facilitation.