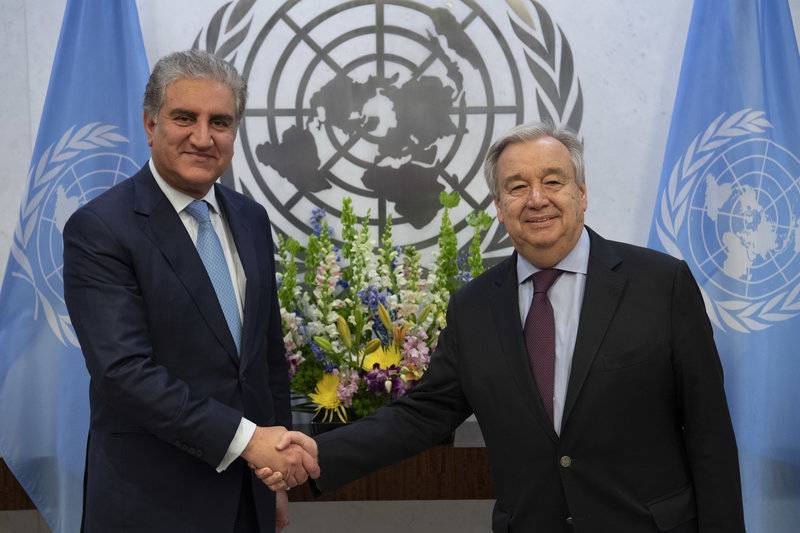 The Foreign Minister said that eight million Kashmiris continue to be placed under indefinite curfew, lockdown and communications blackout for over 150 days.

Foreign Minister meets with President of the General Assembly

Shah Mahmood Qureshi also held talks with the President of UN General Assembly, Mr Tijjani Muhammad-Bande. The two dignitaries discussed a range of issues including recent trends and developments at the global and regional levels.

It was agreed that the United Nations remained an indispensable institution for advancing dialogue, cooperation and pursuing collective solutions to global challenges including poverty alleviation, access to education, agriculture, illicit financial flows, climate change and achievement of 2030 Sustainable Development Agenda.

Noting the convergence in the priorities being pursued by the General Assembly President and Pakistan Government’s “people-centric” socio-economic agenda, the Foreign Minister apprised Mr Tijjani about the launch of landmark national programs by the Prime Minister such as Ehsaas (Compassion) Program on poverty alleviation and the Sehat Sahulat Program on universal health care.

FM Qureshi meeting with President of the Security Council

In his meeting with President of the Security Council, H.E Dang Dinh Quy (Vietnam) in New York, Foreign Minister Makhdoom Shah Mahmood Qureshi while welcoming the briefing of the UNMOGIP and the Department of Political and Peacebuilding Affairs on IOJK to the Security Council, the Foreign Minister apprised him on the current situation and devastating impact of India’s over 5-months long draconian lockdown in IOJK.

While rejecting any claims of “normalcy” as false and duplicitous, the Foreign Minister stressed that the situation in the valley remained critical.

The foreign minister underscored that persistent warmongering and aggressive rhetoric from Indian political and military leadership was a threat to regional peace and security with the profound risk of miscalculation.

He urged the Security Council to act decisively to prevent a disastrous war between Pakistan and India; to call for an end to the grave human rights violations in occupied Jammu and Kashmir and to enable the Kashmiri people to exercise their right to self-determination promised to them in the resolutions of the Security Council.

Earlier today, the Foreign Minister held meetings with other UN leaders including the Secretary-General and President of the General Assembly.