'I did everything for the will of God': Suleman Khan 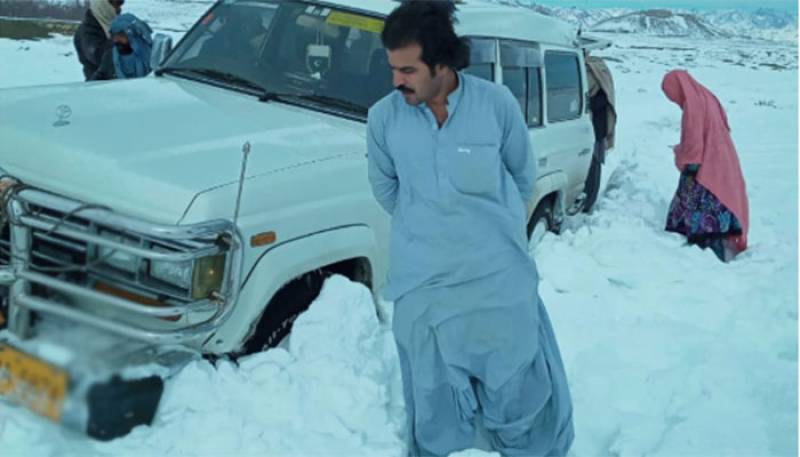 QUETTA - A resident of Quetta is being hailed as a hero after jumping into action to save the lives of 100 people.  Suleman Khan, a young man from Kachlak area in Quetta, emerged as he reached the stranded passengers through his land cruiser and saved lives of more than a 100 people through his heroic efforts.

Three days ago, the Quetta-Zhob highway was shut down due to severe snowfall in the Kachlak, Ziarat Cross, Khanozai, and Kan Mehtarzai areas of the Balochistan province.

The situation led to hundreds of cars being stranded on the road, with women, children and elderly passengers left vulnerable in the harsh weather without adequate food supplies or clothing. Khan not only rescued several passengers through his own car but he also opened his home to them for food and shelter.

#SulemanKhan, a young man from the #Kachlak area in #Quetta, was hailed as a hero earlier this week after he, in an herculean effort, saved the lives of more than a 100 people stuck on #snow-jammed roads in the area. Bracing the blood-curdling cold, Khan not only rescued several passengers by driving them to safety in his own car, but in a gesture of #kindness that has touched the hearts of many across the nation, also opened his home to them for #food and #shelter. (📸: @geonewsdottv ) #Pakistan

His generosity not ended here, he also For those who needed fuel for their vehicles, Khan paid for it from his own pocket.  Khan also helped those whose cars broke down due to intense snowfall, even to the extent that he provided them fuel with his own resources.

Khan added, “I tried to give priority to pregnant women, heart patients and small children when rescuing, and made them stay in my own home, fed them, and gave them a place to sleep.”

Notably, more than 100 people have been killed across Pakistan over the past three days as landslides, avalanches, and severe cold hit the mountainous areas of the country.