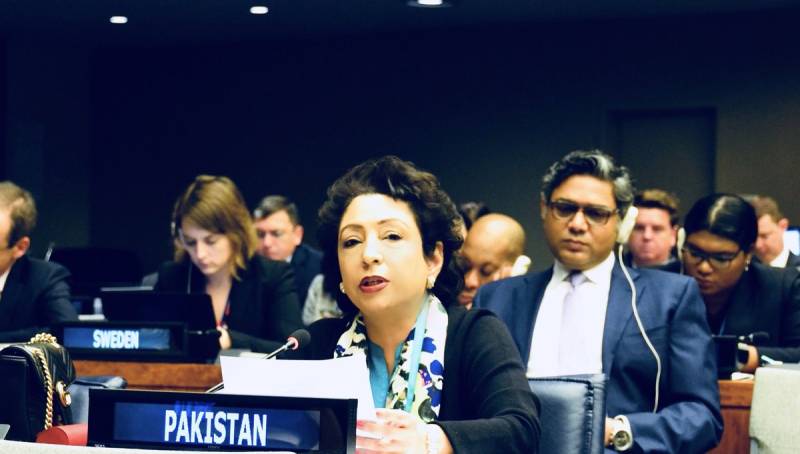 NEW YORK -  Pakistan has strongly condemned Israel’s acts of state terrorism in Gaza, which had claimed the lives of scores of innocent Palestinians, at the United Nations.

The country’s Ambassador to the United Nations Maleeha Lodhi on Wednesday called for an independent inquiry into Israeli “state terrorism” in Gaza.

“I raised the issue of the massacre of Palestinians due to Israeli state terrorism in Gaza,” Lodhi said while talking to the media after she addressed the UN General Assembly during the Sixth Review of the UN Global Counter-Terrorism Strategy.

At least 61 people have been killed by the Israeli military and more than 2,700 injured along the Gaza border on Monday, health officials said, as the US officially moves its embassy from Tel Aviv to Jerusalem.

“Pakistan condemns the massacre of Palestinians and calls on the United Nations to conduct an independent investigation into the tactics used by Israeli forces,” Ms. Lodhi said.

“Israel is already an occupying power and peace has not been restored in the Middle East because of it.

“No condemnation is enough of the brutal massacre of women and children by Israeli forces,” she added.

Lodhi continued, “Notice should be taken of countries such as Israel which resort to state terrorism.”

Heartbreaking after the carnage ..... https://t.co/RMiVXkRp1D

Presenting Pakistan’s point of view on the Strategy Review, Ambassador Lodhi said that any comprehensive preventive strategy should incorporate both internal and external factors that drive terrorism in different parts of the world as well as the role of foreign occupation and prolonged unresolved conflicts that have contributed significantly to the rise of violent extremism.

She discarded the strong but erroneous impression being created by some with regard to the preventive approach, that terrorism and violent extremism are only the products of lack of good governance, human rights, development and the rule of law at the national level.

Lodhi insisted that the drivers of terrorism, like foreign interference and occupation, protracted conflicts, lack of the rule of law at the international level, political and economic marginalization of migrant communities must also be part of the ongoing discussions at the UN.

“Evolving a comprehensive preventive approach is not possible without assessing the root causes that lie behind terrorism and violent extremism”, she added.

“When reviewing UN’s global counter-terrorism strategy we should also take into account foreign occupations,” she said, adding, “Foreign occupation is a big factor in violent extremism.”

“Due to foreign occupations violence increases not only in the region but also other areas,” she continued.

Lodhi further said, “Unresolved political disputes such as in Azad Jammu and Kashmir also need to be incorporated in UN’s global counter-terrorism strategy as both internal and external factors lead to violence.”

“There is a need for a strategy to address the causes of violent extremism,” she stressed.

The Global Counter-Terrorism Strategy (GCTS), originally adopted by the United Nations General Assembly in 2006, is currently undergoing its sixth review by UN Member States. This review process is state-led and (ideally) produces compromise among state priorities, enabling a comprehensive, strategic and well-positioned, cross-cutting strategy on counter terrorism to shape global, regional and state responses to terrorism.

Ambassador Lodhi also expressed concern over the international geopolitical environment which, she said, is much more uncertain now than at any point in the past two decades. “New risks and threats have emerged to international peace and security, while older and traditional threats have not diminished”, she added.

Terrorism, she said, is spreading, poverty remains persistent and human rights are being violated with impunity along with large scale human dislocation. “While the pillars of world order are being undermined by some, the imperative of international cooperation – to address common challenges including terrorism – is intensifying”, she added.

While acknowledging that the UN has strengthened its ability to assess Member States capacity in implementation of the Council’s resolutions on counter-terrorism, Ambassador Lodhi pointed out that what was lacking now is how the UN can assist Member States with financial and technical resources to meet these requirements and obligations. “Through the review, we should strengthen the UN’s ability to assist member states in dealing with the threats of terrorism in line with Member States’ national priorities,” she stressed.

Emphasizing the need for a preventive approach towards terrorism, Pakistani envoy said that the approach in dealing with new trends of terrorism should not be reactive but preemptive, particularly in dealing with the use of new technologies by terrorists.