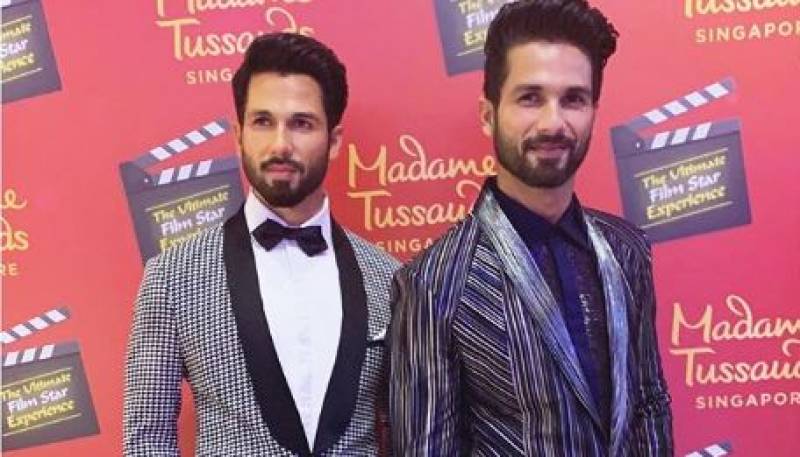 SINGAPORE - Bollywood star Shahid Kapoor has unveiled his wax figure at the Madame Tussauds Wax Museum in Singapore. He took to Instagram to share first pictures with his statue, which does look like a spitting image of the star.

“#Twinning,” he captioned a picture on Instagram which shows him posing with the wax statue. Both, the real Shahid and the wax one, are wearing stylish suits and the same shoes. More pictures posted on his Instagram stories show him fixing the figure’s hair or clicking selfies with it.

The actor’s fans could not believe how uncanny the figure looked. “Which one is real,” asked a fan in the comments section of Shahid’s pic. “Who’s the real one you should mention Shasha,” suggested another. “Awesome....took me seconds to differentiate,” commented another fan.

Shahid was accompanied by his wife Mira Rajput to reveal the statue. However, the actor didn't take his kids along with him. When asked why did he take such a decision, the actor said that they may be surprised with what just happened and that could be a traumatic experience for them.

On the work front, Shahid Kapoor was last seen in Sanjay Leela Bhansali's Padmavati. His upcoming film 'Kabir Singh' is a remake of 2017 Telegu film 'Arjun Reddy', both have been helmed by Sandeep Reddy Vanga.

The film which stars Kiara Advani as the female lead will hit the screens on June 21.