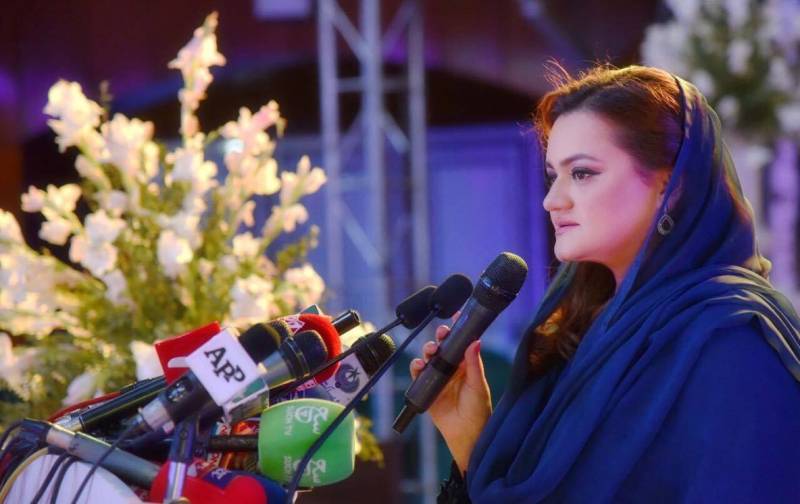 ISLAMABAD -  Minister of State for Information and Broadcasting Maryam Aurangzeb has termed the chairman Pakistan Tehreek-i-Insaf Imran Khan, a threat to the country and state institutions.

In a statement issued on Monday, the legislator took strong exception to the criticism of PTI chairman against the Sharif family and expressed that Imran had sullied the image of politics through his detestable antics.

'Imran Khan was the enemy of development and a great threat to the country, due to his irrepressible lust for power and politics at the cost of Pakistan,' she stated.

Referring to the criticism of cricketer-turned-politician regarding Sharif family's appearance before the accountability court,  Marriyum observed that the people he was mentioning were appearing before the law and the constitution in spite of false allegations against them.

The lawmaker maintained that the entire nation knew well who was running away from accountability, was a proclaimed offender and an absconder from the courts.

'The people of Pakistan knew his real credentials and posed a question as to whom he was trying to befool by fabricating lies' noted the minister.

Maryam went on to say that Imran Khan would not be able to achieve his objective by being jealous of former Prime Minister Muhammad Nawaz Shrif.

'It was due to his (Nawaz Sharif) vision and the efforts of the present government that Pakistan had regained its respect and prestige at the global level and its identity had been revived' she added.

The minister advised PTI supremo to wait till 2018 and let the country tread the constitutional path adding that PTI had been defeated in NA-120 and as the 2018 election would draw near 'Imran would feel scared of even the shadow of Maryam Nawaz'.

It is relevant to mention that the PTI head had fired a broadside at the former ruling family alleging that the country was fast advancing towards chaos because of the confrontational attitude of the Sharif family.

'The PML-N is deliberately attacking the army in a bid to provoke it to derail democracy. But the army has clarified that it will stand by the Constitution and law of the land,' he had said while addressing workers convention in Lahore.