Govts should be elected on public votes, says Maryam Nawaz at PDM's rally 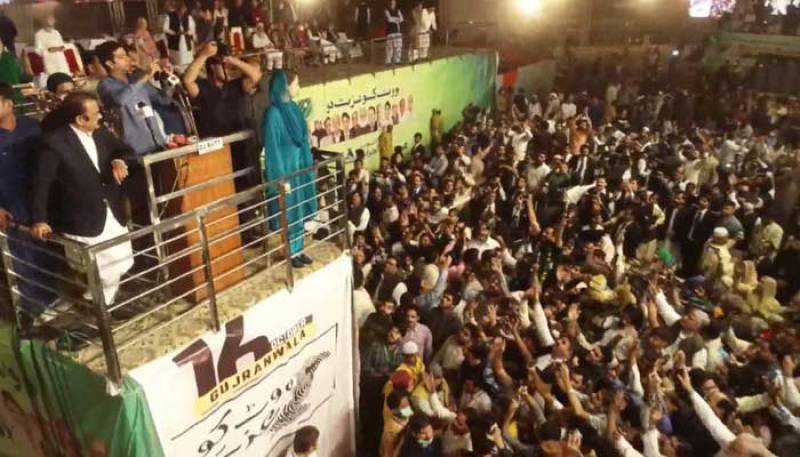 LAHORE – Pakistan Democratic Movement (PDM) – an alliance of all major political parties – is holding its first power show since it was made against the incumbent government over what it called bad governance, inflations and biased accountability drive.

Leadership of Pakistan Muslim League-Nawaz (PML-N), Pakistan Peoples Party (PPP), Jamiat-e-Ulema Fazl (JUI-F) and other opposition parties will address the public at Jinnah Stadium in Gujranwala to give another boil to the prevailing political turmoil.

You can watch live PDM jalsa below here;

Thousands of have reached the stadium and raising slogans against the government and in favour of their political leaders.

PML-N vice President Maryam Nawaz has left for the Punjab’s city from her residence in Lahore in form of rally. Maryam's carvan has now reached the stadium nearly after six hours.

Took us 6 hours precisely to get out of Lahore ! Ek samandar tha logon ka ! Now rushing to Gujranwal. Crossed Kamoki.

Govts should be elected on public votes, says Maryam Nawaz

Pakistan Muslim League-Nawaz (PML-N) vice president Maryam Nawaz on Friday reiterated that governments should be elected by people through their votes.

Addressing the Pakistan Democratic Movement (PDM) rally in Gujranwala, she said that public have to suffer when sanctity of vote is violated.

Highlighting failures of the incumbent government to tackle inflation and unemployment, she said that lady health workers and elderly pensioners are holing sit-in in Islamabad to get their rights.

In reference to her father’s disqualification, she said that an elected representative is ousted just over an iqama.

Addressing charged participants at Jinnah Stadium, she said that she has come to Gujranwala with the case of traders, labourers and rising inflation.

Bilawal Bhutto Zardari also lashed out at the government over rising inflation and poor foreign policies.

He said that the selected government has destroyed the economy of Pakistan, adding that the country is submerged in crises.

The PPP chief hit out at what it called biased accountability drive and said that Imran Khan and other PTI leaders should also be held accountable for their wrongdoings.

He accused the government of making a deal on Kashmir and giving NRO to Indian spy Kulbhushan Jadhav.

PDM chief Maulana Fazlur Rehman talking to media before leaving for the Gujranwala said that his carvan and Maryam’s rally will gather at one point and will enter Gujranwala together.

Hitting out at Prime Minister Imran Khan, he said that now situation has changed altogether as now the premier is seeking NRO from the opposition parties.

He reiterated that the opposition is on roads to throw out the unelected government, besides calling for new elections in the country.

The PDM was allowed to hold rally on Thursday after local administration and opposition alliance reached an agreement.

One of the main point was that SOPs announced by the government to control the spread of the coronavirus will be observed.

However, the situation in the stadium is not appreciable as workers and supporters of the political parties can be seen without face masks while no social-distancing is being observed.

A heavy contingent of police has been deployed around the stadium and at different points in the city to control any untoward situation.

Meanwhile, the PDM has also made security measures on its own under which around five hundred members of the political parties will coordinate with the officials to control the situation.

Punjab govt spokesman says roads have been blocked for safety reasons. Govt should not have panicked #Gujranwalan16thOct #PDM pic.twitter.com/XrLGYwFkMR

Prime Minister Imran Khan on Friday said giving an NRO and comprising with the people was easy but it was nothing “devastation”.

“The tough decision always takes you ahead,” said the PM while addressing a ceremony after inaugurating N-Ovative Health Technology Facility at NUST Islamabad.