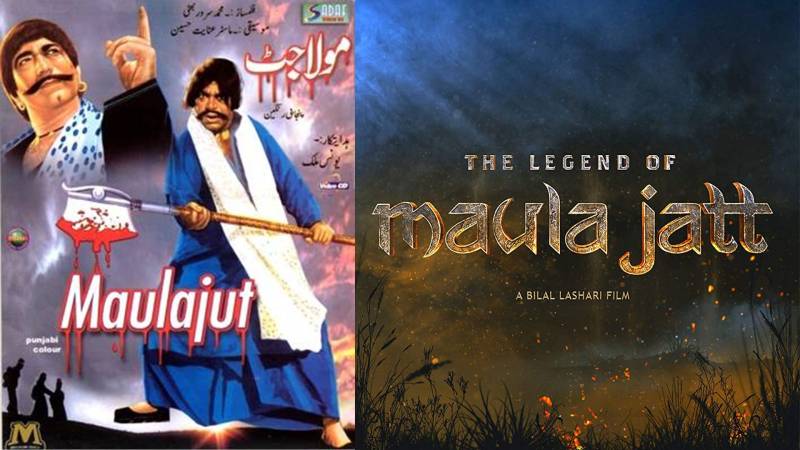 LAHORE - Pakistani director Bilal Lashari's remake of Maula Jatt, the classic hit of the 1970s, is in the making these days. The multi-starrer is expected to release this year's Eid ul Fitr but prior to the release, the remake's producers are facing legality issues and copyright disputes from the original Maula Jatt‘s producer Sarwar Bhatti.

The Legend of Maula Jatt features the Humsafar couple Fawad Khan and Mahira Khan along with Hamza Ali Abbasi and Humaima Malick in lead roles.

On 21 December 2018, Bilal Lashari had revealed the trailer for the multi-starrer which seemed to be inspired by European history. The wrestling pits found in Punjab have been replaced by a gladiators' arena.

The visuals seem to have been influenced by a combination of movies including Prince of Persia, Gladiator, Assassin’s Creed and Scorpion King to mention a few. Fawad and Hamza look brilliant in the new avatars though.

Here is the trailer for The Legend of Maula Jatt:

Fawad Khan is playing the role of Maula Jatt in Bilal Lashari's directorial. As seen in the trailer the actor had worked really hard for getting the intense look.

On the other hand, recalling the 1979's Maula Jatt main role Sultan Rahi what comes to our mind is a stout man with a typical Punjabi style moustache and a Gandasa (halbert) in hand along with strong intense looks on the face and command over the expressions will delivering dialogues.

Here is a clip from Sarwar Bhatti's Maula Jatt:

Now, two months prior to the release of The Legend of Maula Jatt, Lahore High Court has accepted the petition filed by the 1979's Maula Jatt producer Sarwat Bhatti which states that Bilal Lashari has illegally used the title, script, characters, poetry, songs, music from the original Maula Jatt without taking any permission from the Bahoo Film Corporation.

In the petition, Bhatti had mentioned that Lashari's film is an illegal remake as it was made without the permission of the original's producer. Bhatti contends that Lashari and others involved are infringing on his legal rights. Furthermore, Bhatti has urged the court to suspend what he called an illegally issued censor certificates for Lashari's remake.

LHC will be hearing the case on 25th April 2019. Earlier in March, LHC had issued stay over the unauthorised use of the title of the film Maula Jatt, and dialogues, characters, making/shooting and exhibition of work identical to the movie.

Also in January 2019, Mr Bhatti had resurfaced with a new claim that he had attained a stay order from court over Maula Jatt, however, Intellectual Property Tribunal of Lahore (presided by Judge Khalid Mehmood Bhatti) vacated the stay order in producer Ammara Hikmat and Director Bilal Lashari’s favour months ago.

However, Ahmad Pansota, the correspondent of Bilal Lashari had said that the copyrights certificate was in their name had been challenged by Bhatti.

“There is no battle that he has won. Two different trademarks have been applied for both the 1979 flick and our The Legend of Maula Jatt,” he said.

Sarwar’s counsel, Hassan Niazi, on the other hand, said that “trademark itself was the main thing".Following it, he had tweeted that, after a strenuous fight for rights and struggle, the original copyrights of the 1970’s classic hit are being handed over to Sarwar Bhatti and Niazi. He also mentioned that the Maula Jatt’s remake producer Bilal Lashari had taken the movie copyrights ‘By Force’:

Breaking-plz RT against mafia.Sarwar Bhatti the maker of original “Maula Jutt” given the certificate of ownership TODAY. Only Sarwar sb has right over the movie HE HIMSELF MADE.Bilal Lashari tried to take away his ‘property’ BY FORCE. Court has given restraining order agnst Bilal pic.twitter.com/1gwJ5BOCAm

A Trade Mark registry was also be seen in the post by the human rights activist. The notice clearly stated that the copyrights to the cinematographic work are only authorized by Muhammad Sarwar Bhatti.

Filing a case in December 2018, Sarwar Bhatti had filed a suit before the Intellectual Property Organization of Pakistan’s (IPO) tribunal seeking an injunctive order against the exhibition of Maula Jatt being directed by Bilal Lashari. He claimed to possess the rights of the movie, including title and cinematography.

The tribunal forwarded the case to the Federal Investigation Agency for inquiry and sought replies from Bilal Lashari, and later the IPO rejected Bhatti’s claims. A document is being attached below issued by IPO, which clearly states, “No any violation of the CRO 1962 has been committed by the Encyclopedia Lashari Films [producers of the upcoming Maula Jatt],” further stating, “The cinematic work [in Bilal’s Maula Jatt] is actually very derivative work.” 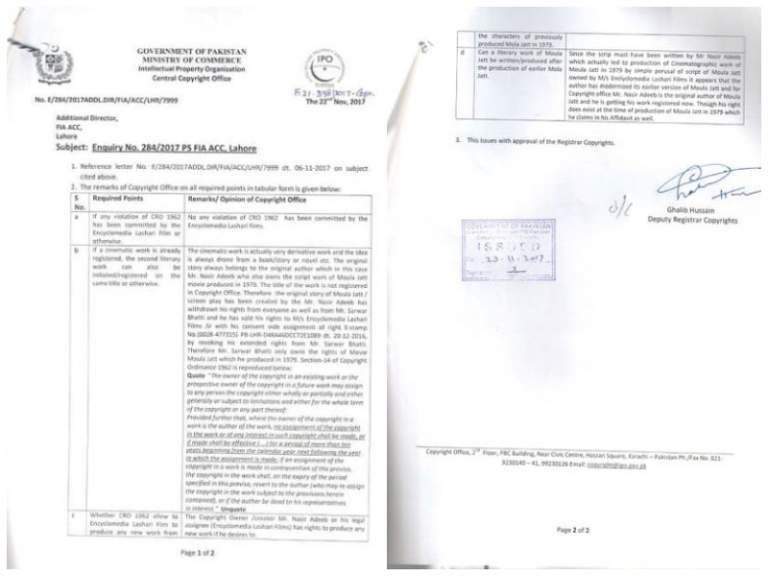 So far the original makers of Maula Jatt are stick to their points and are strongly taking action against Bilal Lashari, Ammara Hikmat and other filmmakers of The Legend of Maula Jatt for copying their movie script and idea without taking copyrights.

Let's see what happens following the legal battle between 1979's Maula Jatt producers and The legend of Maula Jatt's filmmakers.