Remember Pakistan's 'Harriet Tubman' who got $2.3 million from Humans of New York? This is what she has done with it 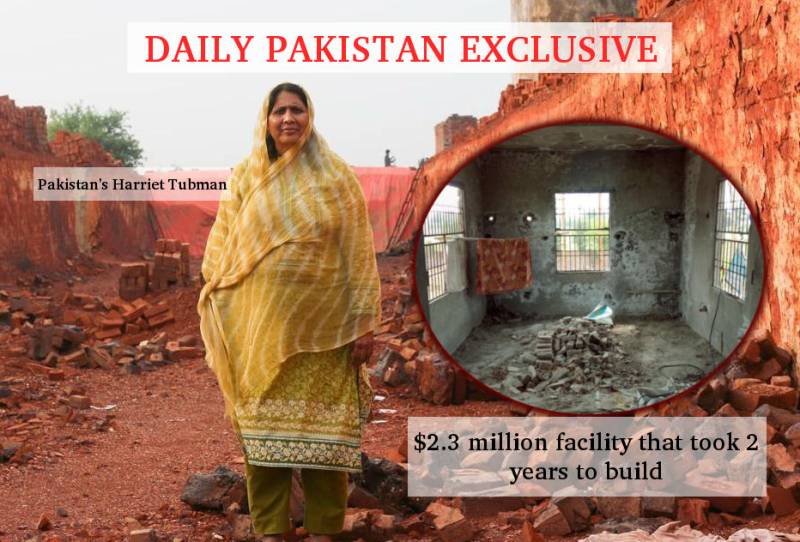 Humans of New York talked about Fatima's efforts to eradicate bonded labor in Pakistan, and appealed to the international community for donations to her organization and her cause.

As a result of the attention received through the Facebook page, over $2,300,000 USD was raised within a few days for the Bonded Labor Liberation Front. 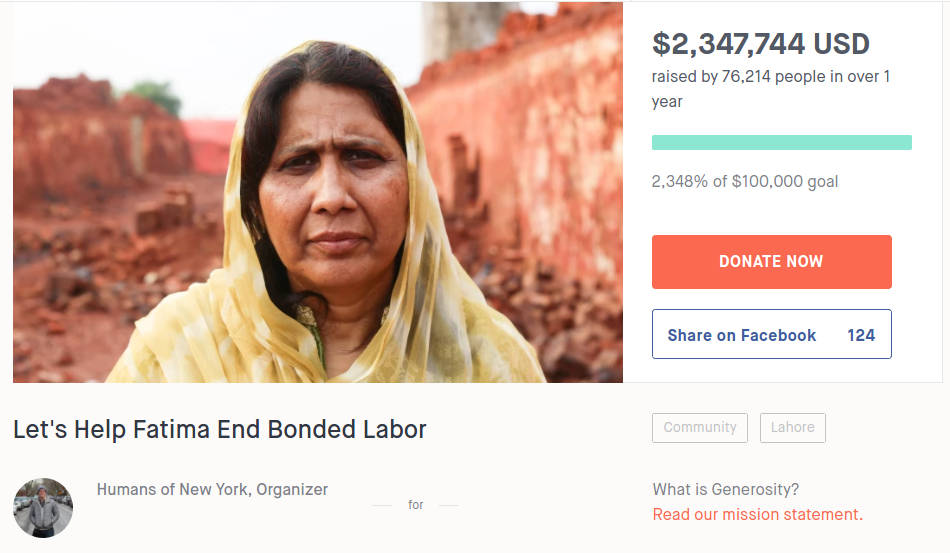 Fatima was hailed as "a modern-day  Harriet Tubman" - after the abolitionist who successfully helped more than seventy slaves to freedom after the American Civil War - and received the Clinton Global Citizen Award. As her work gained more attention and acknowledgement worldwide, the donations came pouring in.

Unfortunately, the donations - supposed to be used for liberating bonded slaves and the eradication of bonded labor - seem to have been swept under the rug, and no one seems to know how they are being used, or, indeed if they are being used.

The official website and Facebook page of the organisation have not been updated, and there is no information on how the funds have been used, and how many developmental projects have been completed, if any. It seems as if the donations are not being used.

The NGO claims that it raised USD 2.3 million (PKR 246,114,003) through HONY for a project called 'Freedom Center', which was meant to offer a safe haven for rescued workers. The NGO maintains that one of the first centers is being built on Raiwind Road, Lahore but, like many government projects plagued by corruption, this one seems to exist only in photographs and on paper.

Daily Pakistan contacted Syeda Ghulam Fatima for comment. We sent her a formal email at her request to inquire about the ongoing projects and progress reports of the work that the organisation has done so far, apart from seminars and promotional banners.

Initially, she denied that she received any email from us but we realized that she had indeed received the email when she began to repeat our own questions on the call, as she criticized us for our 'inquisitiveness'. She added that she was not at 'liberty' to disclose the exact whereabouts of the building but stated that she could share some 'pictorial information' through email.

The NGO claimed that they planned to construct a Freedom Centre on Raiwind Road, Lahore, using the funds raised through HONY. According to the blueprint (depicted above), the center was supposed to occupy an area of 25500 Sq ft, and would include facilities such as a healthcare unit, community hall, school and residential areas for rescued bonded laborers.

To verify that the NGO was in the process of building such a grand facility two years after receiving this hefty donation or has already built it (the statements kept contradicting the previous ones), we asked the NGO if we could visit the facility for ourselves in order to verify their claims.

At this point, they stopped responding to our queries, their only responses being excuses. They initially said that they wanted to keep the whereabouts of the facility secret in order not to compromise the identity of the rescued laborers. We did not receive a positive response even when we provided assurances that we would not disclose the location of the Freedom Centre.

After persisting for two months, we decided to give them an ultimatum. We told them they had a choice: they could either show us the facility, or we would publish our story in its current state. Finally, the NGO relented.

They finally agreed to take us to the location, which turned out to be 50 kilometres outside of Lahore. We were finally introduced to the 25500 square foot "grand" Freedom Center made with USD 2.3 million that took 2 years to construct:

To our shock, the location that was hitherto being touted as a "well-built" and "safe" haven for recovered bonded labourers was little more than a desolate ground that we calculated to be a mere 8 kanals (barely one-tenth the size promised), with one incomplete disheveled building on 4 marla (1089 sq ft) consisting of three rooms with no utilities.

The gloomy building conveyed a miserable picture. The walls have not yet been painted, while the stairs are still rugged, making it impossible for any living being to inhabit it in its present state, let alone laborers who have been liberated from bondage. 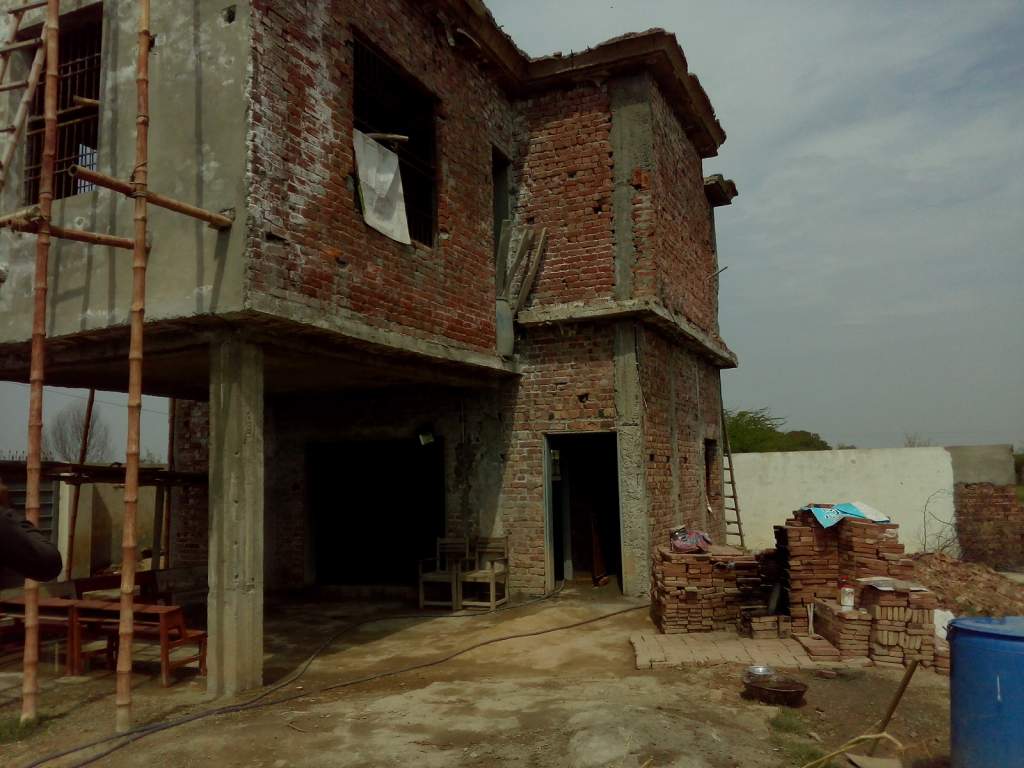 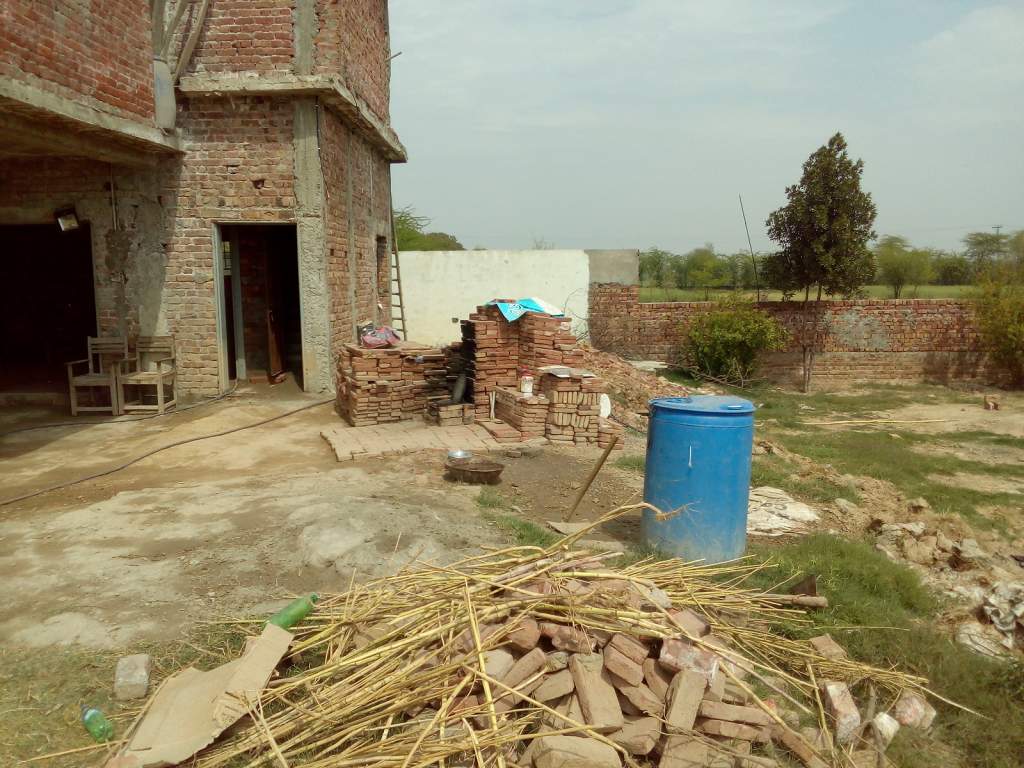 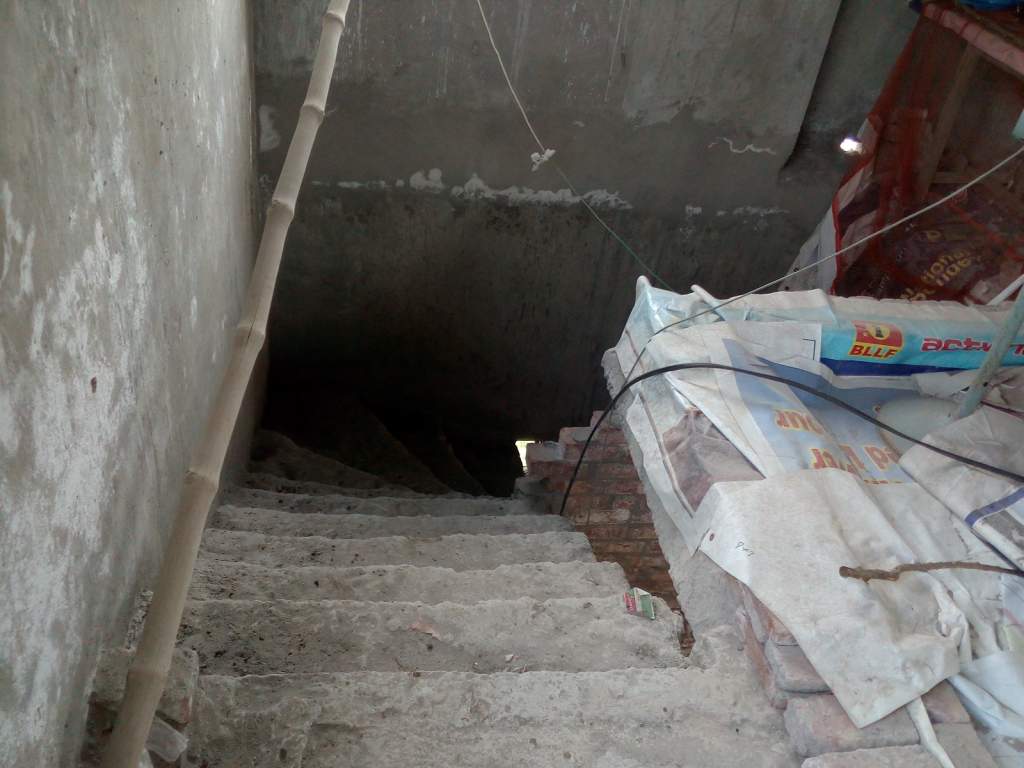 Not only was this tiny building incomplete, there was no sign of any ongoing construction. In fact, it seemed as if construction of this facility had been halted a long time ago.

There are at least four brick kilns around this place which are visible from the first floor. The logic for building a center surrounded by brick kilns, we were told, was to "facilitate and rescue" the workers employed in these kilns. The project manager, however, stated that the building was still incomplete and uninhabited due to "lack of resources" and the unavailability of electricity.

This was a direct contradiction to earlier claims that the whereabouts of this place was being kept confidential in order to protect the rescued laborers from influential brick kiln owners who "wanted to take revenge." Which inhabited workers were they talking about when there were clearly none?

We asked the project manager as well as Syeda Ghulam Fatima about this, and were told that the donations they received had only been sufficient for constructing what she now called 'Freedom Resource Centre'. She said that she did not expect the funds to be sufficient for the 'sustainability' of this center. "We definitely need more donations and funds," she added.

When we asked her why there had been no tangible progress even after the passage of two years, Fatima replied that it was not easy for her to put together a mega-project that includes a hospital, rehabilitation center, schools, community center and even a paralegal staff.

The project manager believed that donations were not enough even for the construction of the building, stating that "even building a 5 marla house requires a lot of money." 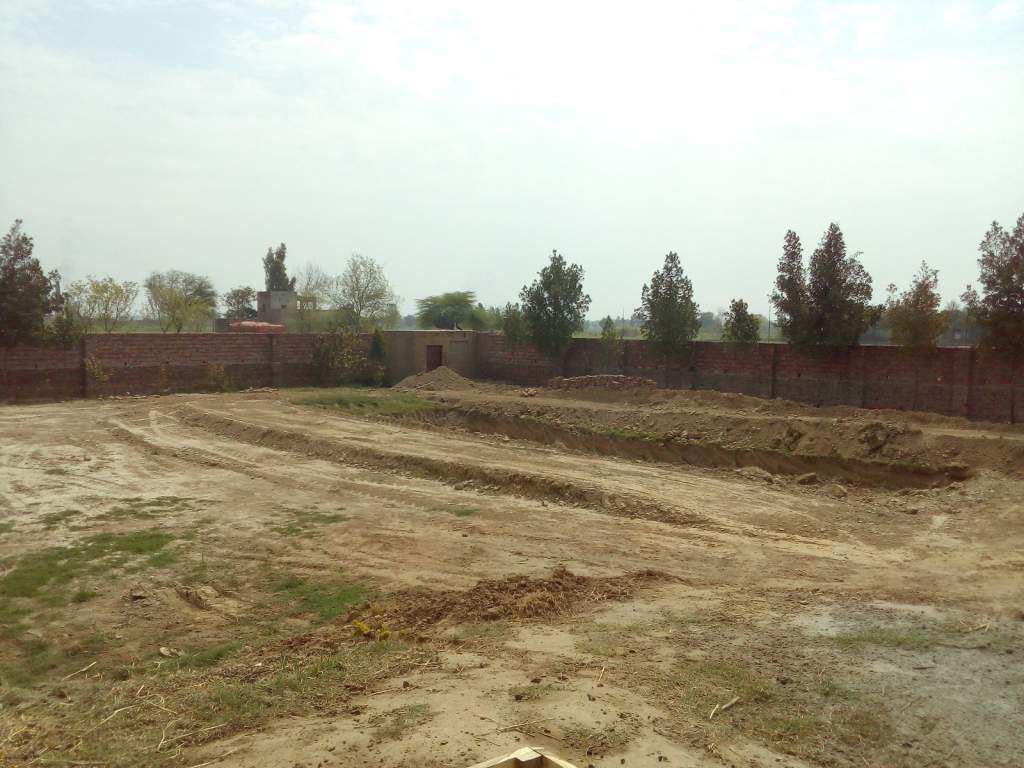 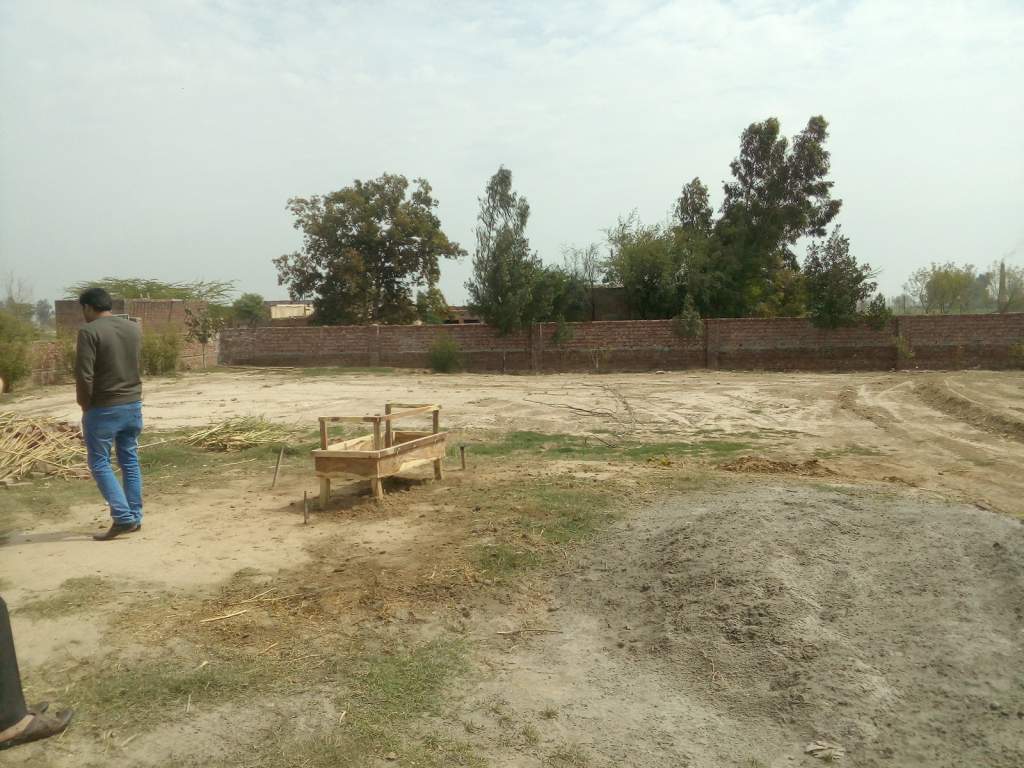 For comparison purposes, with $2.3 million (PKR 24 crore) in Lahore, one can easily buy a fully-furnished, 10,000 sq ft house in Lahore's most expensive DHA area, with enough left over for maintenance and sustainability of the facility for at least five years.

Fatima, who had earlier emphasized that the 'safe house' and 'freedom center' were two completely different projects and that she "owned" both, now stated that this was the only project being built by HONY money and that she was facing serious obstacles in building it. She didn't offer any clarification about why she claimed to own a freedom center occupied by recovered bonded laborers.

It is pertinent to add here that two months ago, we had visited BLLF's office in Lahore where we were introduced to "recovered laborers". The NGO had told us that these laborers had come from the Freedom Center that had been constructed using HONY donations, and that they had arrived especially to share their ordeal with us. The reason for letting us to meet those bonded laborers at the office was to keep us away from visiting the 'freedom center'.

The present state of the "Freedom Centre" puts a huge question mark over those meetings, as the facility the NGO claimed those laborers came from, does not seem to exist.

We are not sure if this has been caused by mismanagement on part of BLLF or due to corruption on part of the NGO management. What are sure of, however, is how unfortunate it is that such a huge donation gathered from all over the world to help bonded slave labourers has been wasted in such a manner.

Brandon Stanton, as well as all the donors who donated this money, had placed their absolute trust in this NGO as well as "Pakistan's Harriet Tubman", Syeda Ghulam Fatima. It would be a tragedy if it turns out that they have betrayed this trust.

In Pakistan, NGOs receive hefty donations with little or no oversight, with the result that very few projects exist beyond documents and photographs. Neither the government nor the press follows up on these grand projects, and foreign donors are shown lengthy but misleading reports or fabricated photos,  in attempts to satisfy them. When some donors insist, they are fobbed off with excuses of "security situation", and those who swindle these foreign donors are easily let off the hook.

It is shameful that, despite the best of intentions, a great campaign and a huge fundraiser, HONY has been unable to put a dent in the slavery situation in Pakistan. If mismanagement and corruption continue unabated, even $2.3 billion will not be enough to alleviate Pakistan's slavery situation.