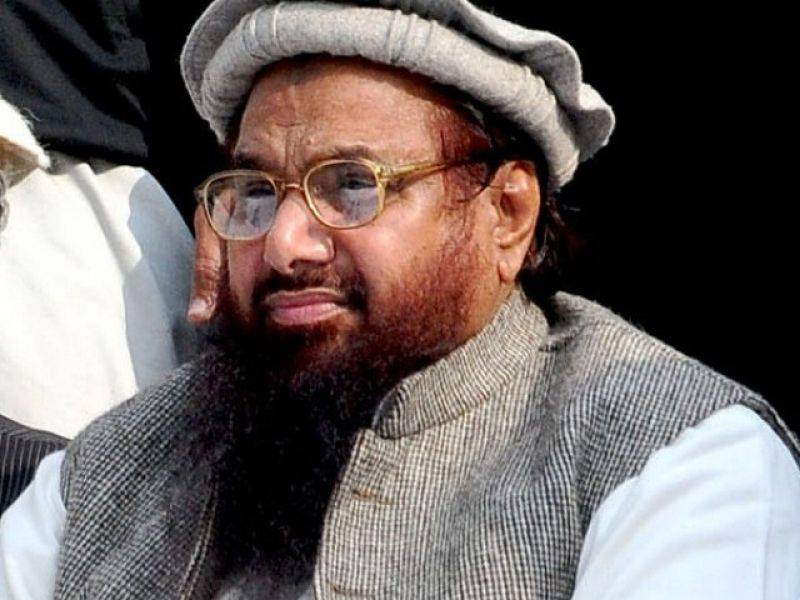 LAHORE (Ali Zain) – In an awkward moment on Sunday #HafizSaeedWasRight became the top trending topic at social media network Twitter in Pakistan. The man who carries a bounty of $10 million on his head, wanted by India for conspiring a terror bid in Mumbai that killed 160 people in 2009 and heads an organization, Jamaat-ud-Dawah, proscribed by United Nations; is said to be right by Twitter users in Pakistan.

The hashtag appears to be an attempt to prove that 'Hafiz Saeed Was Right' to accuse India for destabilizing Pakistan. The recent Corps Commanders Conference had  taken up the issue and  the foreign secretary also warned India over whipping the militancy in Pakistan a day after Karachi bus attack. In the moment the question that arises is whether Hafiz Saeed's statements have become the official stance of Pakistan?

Saeed has been strong critique of India for its occupation in Jammu and Kashmir, the area disputed between Pakistan and India according to United Nations. Once addressing a ceremony in Lahore, he claimed to have fired the first rocket in Kargil ambush in 1999 as well.

Moreover India also blames him for running the training camps for fighters who challenge Indian army in Kashmir.

As a response Hafiz Saaed has also been time and again blaming India for fanning the terrorism and sectarian war in Pakistan.

On the other hand his organization, JuD, also manages a welfare organization named as Falah-e-Insaniyat Foundation (FIF) that carries out major rescue operations in calamity-hit regions of Pakistan. The organization also maintains a school network in the country where hundreds of student a given free education. Following the Karachi gun attack that left 45 Ismailis dead, the alleged hand of Indian RAW behind this deadly incident has become a topic of debate in the country. Making it right hit in the right time, Hafiz Saeed’s followers spared some time to bash Indian propaganda against their leader. While using hashtag #HaizSaeedWasRight at twitter they tried to remind the Pakistanis that Saeed has been hinting at Indian involvement in Pakistan over a long time.

The hashtag received a mixed response from twitter users however. Many users tweeted about the welfare services of JuD and anti-India stance whereas several others exchanged anti-Hafiz Saeed views.

Few of those tweets are:

Terrorist #Modi will ultimately proved to be the Hitler of this Region...India in a war madness state #HafizSaeedWasRight

Not a single case against him in Pakistan, Always stood up at the front in any disaster he Really is a hero of Pakistan #HafizSaeedWasRight — Fatima (@fatima_7297) May 17, 2015

India is a backstabbing nation,thier is no room for trade and talks wid it unless its atrocities end against Kashmir,PK #HafizSaeedWasRight

#HafizSaeedWasRight lybanned because he is funded to spread khariji terrorism in Pakisan. LET JUD banned, why? as they terrorists ARREST HIM

#HafizSaeedWasRight and the first one to raise alarm against Nefarious Designs of RAW in #Pakistan. pic.twitter.com/YAHZ5u53jx

#HafizSaeedWasRight that India is behind destabilising Pakistan and Isolating it internationally, Whole Pakistan knows ! Officially now — Muzamal Iqbal (@DrMuzamal) May 17, 2015

It is also worth mentioning here that twitter had blocked the official account of Hafiz Saeed immediately after the United Nations had announced an embargo for him. He created another account afterwards and it remains functional since then.