‘Cake’ and ‘7 Din Mohabbat In' are now available on Netflix 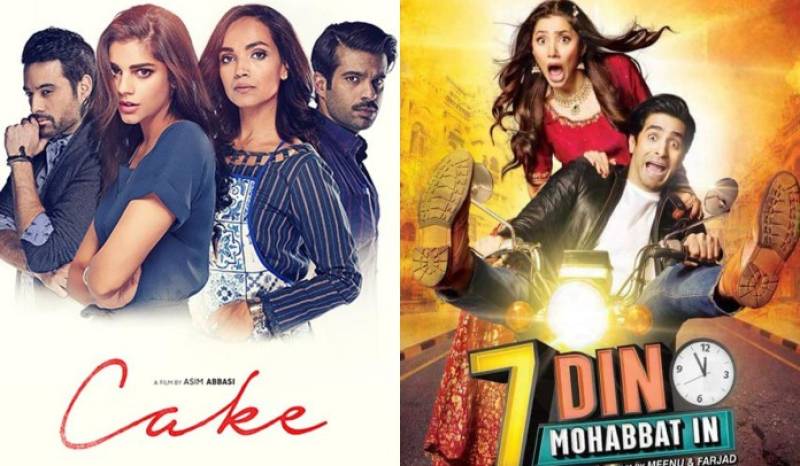 LAHORE - Pakistani acclaimed movies Cake and 7 Din Mohabbat In are now finally available on Netflix. Both the movies were successful in making a huge mark in the box office at an international level.

Cake is the story of a dysfunctional family where we have Zareen (Aamina Sheikh) solely taking on the responsibility of caring for her sick, whimsical parents (Mohammad Ahmed and Beo Raana Zafar) while siblings Zara (Sanam Saed) and Zain (Faris Khalid) have moved abroad. A serious trip to the hospital brings back the entire family together in Karachi, but things are far from hunky dory as accusations are hurled, secrets from the past brought out into the open, which is followed by a whole lot of drama.

A story about love, loss, life, and death; Cake was something that everybody could relate to. A breakthrough for Pakistani cinema, this out-of-the-ordinary film was highly praised by the audiences and did a business of around 12 crores worldwide. It is now available on Netflix for all of you to watch and unwind after a long day.

Whereas 7 Din Mohabbat In; a romantic fairytale comedy with Sheheryar Munawwar (Tipu) and Mahira Khan (Neeli) as its leads.

Neeli is a playful girl who fantasizes for love with stars in her eyes. While Tipu is on a quest to find his true love in a Karachi neighbourhood, in the most unusual manner, for which he has to overcome obstacles, both spiritual and emotional. Though the chemistry between Mahira and Sheheryar was much anticipated after Ho Mann Jahaan, the film got mixed reviews and did a business of 13 crores worldwide. What actually got the movie going was the brilliant performance by the main cast of the film.

So what are you guys waiting for? Grab your favourite snacks and enjoy watching these super hit movies with your loved ones.