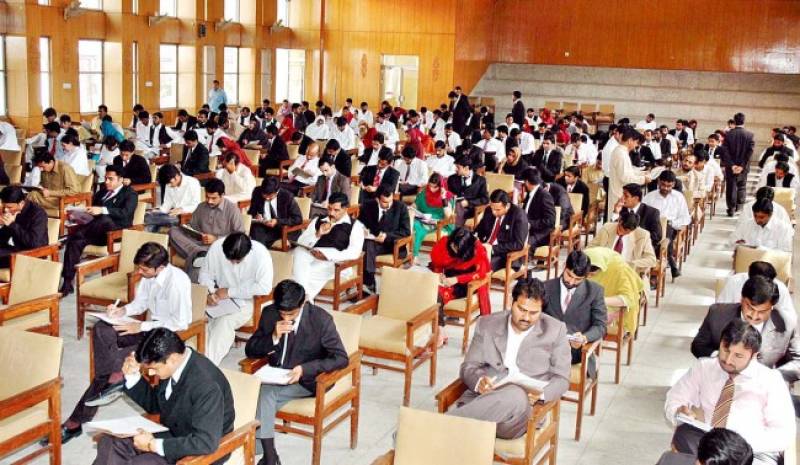 ‘Defenestrate’ was the first word that popped up as I took a glance at the objective part of the Précis and Composition paper, the first paper of the CSS exam. Having passed the CSS exam earlier, I was sure of sailing through the CSS net with much ease this time. However, to my dismay, the first paper gave a severe blow not only to my expectations but the expectations of thousands of other aspirants as well.

As aspirants read the synonyms and antonyms given in the précis paper, they were surprised, shell shocked and angered by the way the first paper was designed. It was obvious that the motive was not to test the candidates’ abilities but to cast a spell on them with all the wrong strategies.

CSS exams have been under the scrutiny of opinion makers for long, but the issue remains unresolved with colonial fingerprints all over it.

Papers were not designed the right way this time. Most of the optional papers were analytical and they were meant to test the cognitive ability of the candidates. This is a good omen and the practice should continue. However, the issue is this that some papers were set with the objective of frustrating the aspirants. The paper of Governance and Public Policy is a case in point to confirm that the Federal Public Service Commission (FPSC) seems to be testing knowledge and skills of its own paper setters but through candidates.

The broader issue is how exams are conducted. As a regular feature, CSS exams are conducted in the manner that a candidate has to take two papers of three hours each per day. This virtually means that an aspiring Babu (consider Babu as a gender-neutral term) has to sit for six straight hours each day. This practice continues for six consecutive days most of the time.

It’s a no brainer that even after studying 12 subjects extensively for more than a year, one needs to revise each subject before the exam. However, how much of the syllabus for the next day’s two papers one can revise after finishing the exams at 5pm. Without any revision, the preparation spanning more than a year can go down the drain. This fear of losing out on revision due to paucity of time frustrates the candidates even before they take the exam.

The FPSC can claim two papers a day are designed to wind up the process swiftly, but what if the process takes 12 days instead of six or what if it takes nine days (one compulsory paper each day for six days and two optional papers per day for three days). The FPSC conducted the exams in nine days back in 2018 and it was a relief for the aspirants.

Frankly speaking, the FPSC seems to be lacking on innovation. The essay paper filters out thousands of candidates each time. Why can’t this essay paper be converted into an entrance test for the subsequent CSS exam? If this practice is adopted, the FPSC can conduct the essay exam months before the regular exam. The candidates passing the essay paper should then be allowed to sit the exam for the remaining 11 subjects. This method would not discriminate against anyone as essay paper has to be taken by each and every candidate.

The stumbling block to the MCQs-based entrance test for CSS was the fact that most of the candidates would be discriminated against. The essay paper as entrance test can provide a level-playing field to everyone. By filtering out the candidates, the FPSC would be easing its own burden and announcing results of the remaining candidates earlier.

The process aimed at selecting bureaucrats is not expected to be easy, but re-adjusting the things slightly in terms of exam schedule and applying a filter would ease the burden on the FPSC as well as candidates. A positive aspect of the CSS exam this time was a better-crafted objective paper of 20 marks for each subject except essay.

Having tested the candidates with a strenuous routine and mind-bending vocabulary, the FPSC needs to do some introspection for the next CSS exam. Make it analytical and rational. As far as the third attempt is concerned, the FPSC needs to revisit it. According to its own report, a very few candidates who fail two attempts appear for the third time. The third attempt should be granted to only those candidates who cleared the written part of any of the first two attempts.

Reforms are also needed in the interview process where focus remains on the body language. However, let’s leave this debate to some other day with the conclusion that the top-notch exam needs innovation and much needs to be done at the end of the Federal Public Service Commission.

The writer is a Section Officer at Ministry of Industries and production. He can be accessed on Twitter @haidersays.