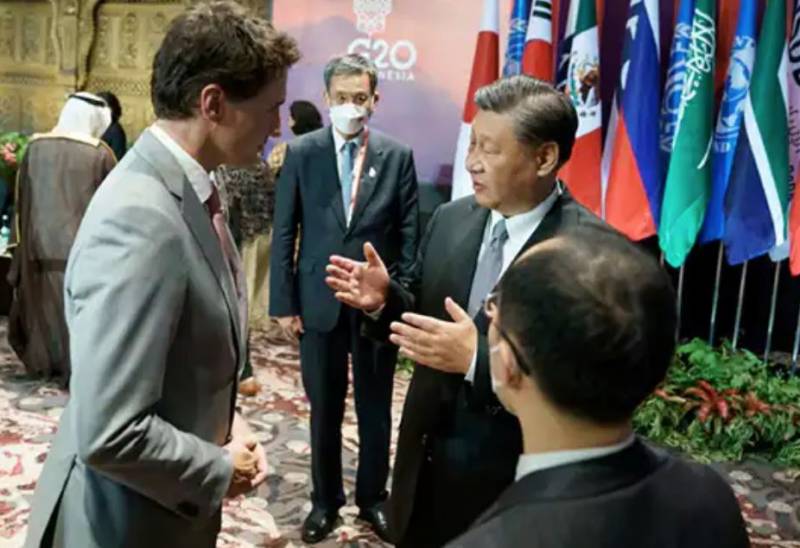 BALI – A brief scolding that China's most powerful leader in decades, Xi Jinping, gave to Canadian Prime Minister Justin Trudeau over a leaked conversation, went viral and made headlines.

In the brief clip, Xi Jinping can be seen having a heated conversation with Mr. Trudeau at a concluding reception for the G20 meeting on Wednesday.

Chinese leader despite smiling tightly expressed displeasure over the leaking of details of the conversation between the two leaders.

The Cdn Pool cam captured a tough talk between Chinese President Xi & PM Trudeau at the G20 today. In it, Xi express his displeasure that everything discussed yesterday “has been leaked to the paper(s), that’s not appropriate… & that’s not the way the conversation was conducted” pic.twitter.com/Hres3vwf4Q

Things we discussed were leaked to the media, that’s not appropriate, a Chinese translator can be heard saying to the Canadian premier. XI called the leaked incident ‘inappropriate’ and accused Trudeau of lacking ‘sincerity’.

In the second half of the clip, Xi called ‘sincerity’ a vital ingredient for fruitful talks. Otherwise, the outcome will be hard to say, he added.

PM Trudeau then responded, saying “In Canada, we believe in free and frank dialogue,” to which the Chinese President responded that “Let’s create the conditions first.”

The footage further shows a brief handshake between the two leaders before they split.

The heated debate occurred at the conclusion of a summit where the Chinese leader sought to steady Beijing's relations with the West. Meanwhile, Ottawa had not been included in Xi Jinping’s roster of formal engagements, depicting displeasure with recent comments.

The two leaders held their first talks in more than three years however the talks leaked to the media. During the rare engagement, the Canadian premier raised ‘concerns’ over interference by Beijing, per reports.