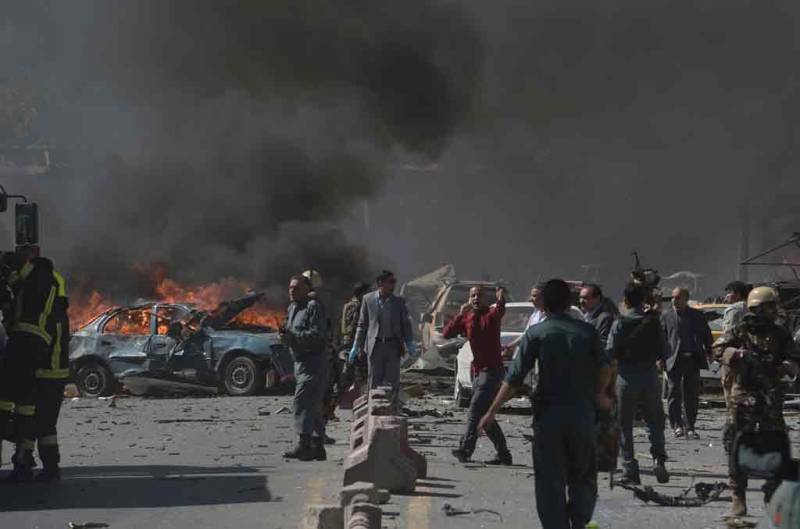 KABUL – At least thirty people were killed and forty-five others injured in two separate blasts in Afghanistan on Tuesday.

According to reports in local and international media, one blast was hit near an election rally held by Afghan President Ashraf Ghani in central Parwan province while the other one was a suicide attack targeted Afghan security forces in the capital Kabul.

Ghani, who is seeking a second five-year term in voting on Sept. 28, was due to address a rally in Charikar, the capital of central Parwan province, when a bomber attacked the gathering.

According to the official, women and children are among them and most of the victims seem to be the civilians.

The attacks came hours after yet another US service member was killed in action in the country — the first since President Trump cancelled peace talks with the Taliban last week.

The first one, in Parwan province north of the capital, saw a suicide bomber on a motorcycle drive up to a large crowd near an election rally held by President Ashraf Ghani and blow himself up.

Ghani's spokesman told the media that the president and his entourage were unharmed, and the rally went on regardless.

The second attack was in Kabul, only about 200 yards from the heavily fortified US Embassy at a congested intersection near US and NATO compounds.

D'Agata said he and his team pass through the junction all the time.

Taliban officials later claimed both attacks, as part of an uptick in violence across Afghanistan in the run-up to the country’s elections on September 28. A spokesman said the bombs were targeting security services.

At least 7 civilians killed in US airstrike in Afghan province

The Taliban, in particular, has vowed to disrupt election campaigning, shortly after peace talks abruptly broke down between the extremist group and the US government. Taliban leaders promised more violence after US President Donald Trump withdrew from negotiations a day after a Taliban attack killed a US soldier.