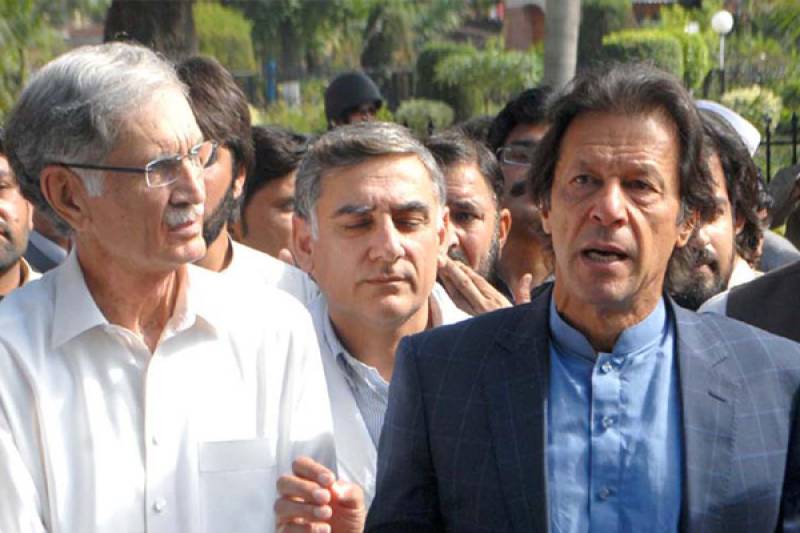 ISLAMABAD - The Pakistan Tehreek-e-Insaf (PTI) has decided to expel its lawmakers who voted in Senate polls, contrary to the party policy, after allegedly receiving huge sums of money.

Addressing a news conference in Islamabad, party’s chief Imran Khan announced said that show-cause notices will be issued to the lawmakers who “sold their loyalties in the Senate elections”, adding that their names will be given to the National Accountability Bureau (NAB).

“I felicitate the party members who didn’t sell their loyalties in the elections,” he was quoted as saying.

According to media reports, the party has finalized a list containing the names of as many as 13 legislators who exercised their right to franchise in recently concluded Senate elections and voted for other parties’ candidates.

PESHAWAR  - The brother of Nagina Khan, PTI's provincial lawmaker, has alleged that the ruling party in ...

Javed Naseem, Yaseen Khalil, Zareen Zia, Nagina Khan, Naseem Hayat, Qurban Khan, and Amjad Afridi are reportedly among the lawmakers who are on the list presented to the PTI supremo.

According to an internal probe, up to Rs40 million were offered to buy their votes in the last month’s election, said the PTI chief. By furnishing explanation in response to show-cause notices, the members can avoid being expelled from the party, he added.

PTI sets an other example by expelling all those who sold their votes in Senate Elections . Imran Khan announces to take this issue to NAB #PTILeadsByExample pic.twitter.com/Ji3hmV2UFE

In a tweet, PTI spokesman Fawad Chaudhry said: “Only the PTI leadership had the moral standing to expose lawmakers involved in horse-trading. Where is this character in conventional political parties? This is why Imran Khan is a hope of Pakistan.”

The PTI chief had decided to take action against those who had sold their loyalties to other parties after the party faced criticism on social media.

The list containing names of accused has been handed over to Imran Khan who will hold a press conference along with Chief Minister Pervez Khattak on this issue later in the day.

The Senate elections held on March 3  for 52 seats were marred by the allegations of horse-trading as all the major political parties raised concerns over alleged purchase and selling of votes.