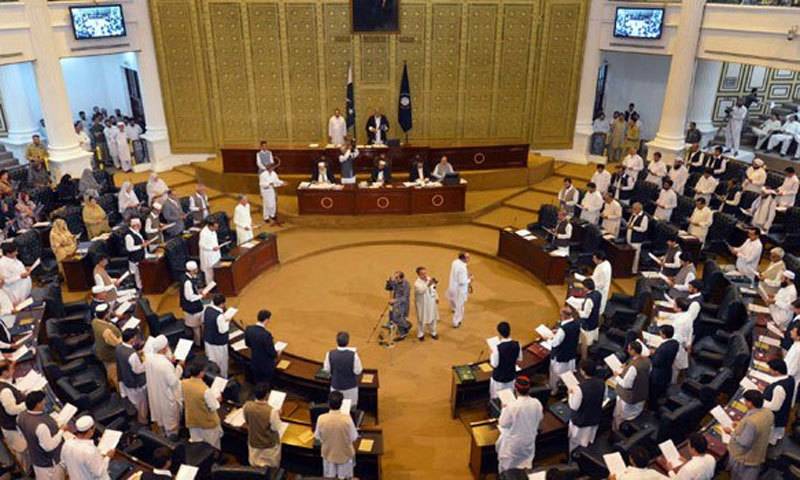 PESHAWAR - The salient features/highlights of the first budget of incumbent PTI Government In Khyber Pakhtunkhwa for the fiscal year 2019-20 announced by Finance Minister KP, Taimour Khan Jhagra are under.

2.It is Rs45 billion surplus budget

5.KP budget is only Rs31billion less than Punjab and Rs34 billion more than Sindh province

6.The considerable increase has been witnessed in throw-forward amount, a historic package of merged tribaldistricts announced

The 7.12pc decrease in salaries of CM KP and Provincial Cabinet members announced

9. No increase in salaries of BPS 20-22 Govt officials

11.Increase in budget outlay was possible due to amendment in retirement laws of Govt employees ie

63year as per the decision of KP cabinet.

12. Proposal of early retirement after 25 years service or attaining the age of 55, that will come later on, has also approved.

13.Approximately Rs20billion per year would be saved after an increase of retirement age of the Government employees

16.Promotion of Govt employees would not be affected by the increase of retirement age as Minister assured of working on promotion laws

19.Rs53.4billion revenue target has been set for KP for the fiscal year 2019-20 that was 54pc more than of this year performance

21.The tax base would be increased

23.Services fee on transport sectors to be brought at par with Punjab province

26.Rs4.2billion for agriculture with an increase of 43 percent

27.Rs640 billion for science and technology and IT with 62perce enhancement

28.Rs4.8 billion for forestry with a 43pc increase

29.Rs1.5billion for industries with a 40pc increase

30.Rs5.7billion for higher education with a 40pc increase

32.Rs162billion allocated for the development of merged areas

33.Rs83billion for 10 years development plan of merged areas under this head

38.Rs54.5billion revenue to be obtained from the divisible pool under one percent on the war on terror's head

40.Rs21.2billion revenue under net hydel profit head 41.Rs34.5billion to be obtained for her hydel profit arrears

42.Rs53.4pc revenue to be generated for provincial tax and non-tax revenue

43.Rs82bilion to be obtained from foreign aid assistance, Rs24.7billion from other resources

44.Total estimates of expenditure are Rs693 billion 45.Rs151 billion for grant of tribal districts 46.Rs256 billion expenditures to incur on payment of salaries, Rs69.9 billion on pensions 47. Rs37.6billion for other expenditure

51.Sehat Insaf Card will be extended to all families by the end of this year 52.Rs7bllionallocated for major hospitals of Peshawar including HMC, LRH, KTH 53. Rs820millionfor treatment of cancer patients

61.All government servants to have the option of subscribing to state of the art medical programs

62.Over Rs. 7 billion to be spent across the current and development budgets for the enhancement of facilities at flagship tertiary hospitals including the Peshawar Institute of Cardiology, KTH, LRH, HMC, the Institute of Kidney Diseases, Saidu Hospital, Fountain House Peshawar and others.

63.Budget for Medicine in Primary and Secondary facilities doubled from Rs. 500 million to Rs. 1000 million.

64.Rs. 4.4 billion for various Health Service Delivery and Immunization programs 65.Minimum health service delivery package to be rolled out for all BHUs, RHCs, and secondary hospitals

66.A big program of tertiary, secondary and primary health facilities and medical colleges including both ongoing and new projects as reflected in the ADP, across every part of the province.

67.KP Govt focus is on what’s in the school, and what kids learn, and not just new buildings.

68.Recruitment of 21,000 teachers to address multi-grade teaching- total 65,000 required to make 4 teachers in every school.

69.Recruit 3000 new ASDOs out of a plan of 7000 bringing the average number of schools per ASDO from 45+ to 8 and subsequently to 3. 70.To launch “Pakhtunkhwa da para” program to put graduates from top universities into govt schools.

72.Construction of 6,000 new classrooms out of the 15,000 classrooms required to counter overcrowding, provision of Rs.1.86 Billion for girls stipends, developing colleges and universities, every college to give good results.

73. Total support of Rs 2.5 billion to almost 20+ universities across the province. 74.Rs1 billion for Pak Austrian Fachhochschule Institute in Haripur, to be opened in Spring 2020.

75.Rs 500m for Abdul Wali Khan University revamping in Mardan, Rs200m for purchase of land and construction of building for Karak Petroleum Institute

76.Rs2b for building and upgradation of all 55+ colleges, Rs. 35m for revamping of public libraries, Rs20m as support of Hindko academy.

78.Creating jobs in the private sector and building the economy 79.Funding to fast track the development of access to the Rashakai Economic Zone

80.Up to Rs. 2 billion for innovative funding programs for youth, women and other entrepreneurs

81.Rs. 2 billion for the expansion of the KP Impact Challenge Phase 2

82.Up to Rs. 1 billion for an Access to Finance fund for SMEs

83.At least Rs. 200 million to fund the creation of the KP Skill Development Fund, to provide high class

84.demand based training by the best training providers in the country, linked to employment.

86.Create at least 10 public-private partnerships in TEVTA Institutes through the TEVTA budget

87.Rs 100 million for the establishment of a marble city in Buner

89.Rs. 1 billion for tourism roads in the Malakand and Hazara divisions for promotion of unexplored tourist 90.Spots and Rs150m for access to Sheikh Badin tourist site. 91.Rs.300m for various tourism activities across the province. 92.Construction of recreational park at Hund Swabi.

93. Rs 500m for Development of 1000 Playing facilities in Khyber Pakhtunkhwa.

94.Rs 350m for establishment and upgradation of 7 sports complexes in Khyber Pakhtunkhwa.

95.Rs. 70m for promotion of hockey and squash throughout the province.

96.Establishment of the tourist police

107.Rs 6.3b in terms of Tobacco Development Cess, NHP and Oil and Gas Royalty to specific districts for uplift along with backlog payments. 108.Rs 600m for Southern Area Development Project.

116.Rs 1.2 billion for solarization of 4000 Masajid, and multiple schools, BHUs throughout the settled districts.

123.Championing Innovation and E-governance 124.Rs 50m for the introduction of paperless communication from CM Office. 125.Rs 100m for the establishment of citizen facilitation center in Peshawar. 126.Rs 256m for promotion and enhancement of digital Jobs in Khyber Pakhtunkhwa.

127. Rs 380m for Completion of land record digitization and establishment of service delivery centers in

128.Rs 30m for Computerization of Arms Licenses in the remaining Districts. 129. Rs 2.8 billion for Billion tree and 10 billion tree tsunami project in the province.

130.Rs 195m for Development and Management of National Parks in Khyber Pakhtunkhwa

133.Rs 9.5b for construction and improvement of small dams, flood protection walls, water supply schemes and canal roads throughout the settled districts. 134.Rs 642 m for drinking water schemes for Karak

135.Rs 1 billion for Gravity Flow Water Supply Scheme in District Mansehra to be funded by SFD, Rs 3.7 billion for small and medium-sized drinking water schemes throughout the settled districts. 136.Rs 60m for scholarships and grants for students in deeni madaris.

137.Rs 10m for Skill Development scheme for minorities. 138.Rs 5m for Construction of Community Based School for Sikh Community in Peshawar 140.Block Allocation of Rs59 billion in the development budget under the 10 years of merged areas.

141.Spend with a direct impact on people to be prioritized; as opposed to procuring land, building offices, etc. 142.The primary focus of year 1-3 to be spent in the social sector; health; education; jobs; wealth creation and on programs that have a rapid impact

144.A third focus area to be relevant planned early harvest projects already in the pipeline especially all of the projects announced by the PM and the CM will be funded 145.Rs 80 m for provision of medicines and diagnostic materials for health facilities 146.Rs 85 m for Strengthening of DHQ Hospitals of Merged Areas

151.Rs 130 m for the establishment of Trauma Centers and Accidents / Emergency Centers in all DHQ

152.Funding for the establishment of Medical College in Kurram 153.Rs 850 m for Upgradation of Educational Institutions from primary to the middle, middle to high or high to 154. higher secondary schools in all tribal districts and former FR regions.

155.Rs 500 m for Standardization of exiting 21 HSS under Quick impact program. 156.Rs 280 m for Provision of Furniture Equipment in Functional Schools throughout the Tribal Districts. 157.Rs 46 m for Introduction of Early Childhood Education in all tribal districts

158.Rs 40 m for removal of staff deficiencies in newly opened areas in education and tribal Districts.

165.Rs 45 million for beautification and promotion of potential tourist areas in tribal districts.

166.Rs 300m for rehabilitation, maintenance & repair of existing power supply lines and installation of new, main lines and transformers in all tribal districts.

167.Solarization of mosques, schools, and BHUs in all tribal districts

168.Construction of 54km Mirali-Shawa and Thall road, North Waziristan and Barang tunnel to connect Bajaurto Swat expressway in addition to significant allocation to the construction of road and blacktopping throughout all tribal districts.

169.Rs 25m for the establishment of general public parks in Khyber that would be spread across all tribal districts