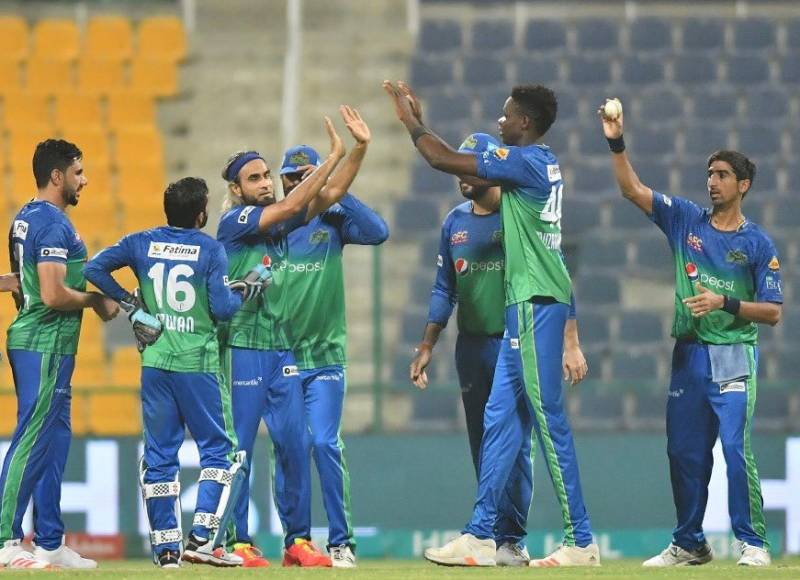 A spectacular show by bowlers led the Multan Sultans to an 80-run victory against the Lahore Qalandars in the match number 28 of the sixth edition of the Pakistan Super League (PSL6) at Abu Dhabi’s Sheikh Zayed Cricket Stadium on Friday.

The Sultans had set a 170-run target after the Qalandars won the toss and invited them to bat first.

Imran Khan Sr. gave the Multan Sultans the first breakthrough as he got the important wicket of Ben Dunk (6) in the second over. Shahnawaz Dhani took the second wicket of Fakhar Zaman (13) in the fifth over, adding to Qalandars’ problems.

Blessings Muzarabani took the third wicket for the Sultans in the sixth over. He dismissed Mohammad Hafeez for 14 runs. Imran Tahir got the wicket of Qalandars skipper Sohail Akhtar (5) in the 10th over. He was stumped by Mohammad Rizwan.

Muzarabani took his second wicket in the 10th over when he dismissed Agha Salman (13). Imran Khan dismissed Tim David (10) in the 13th over.

In the second ball of the 14th over, Dhani dismissed James Faulkner for 22, thanks to a great catch by Imran Tahir.

Dhani, in the last ball of the same over, took the wicket of Rashid Khan (2). Skipper Mohammad Rizwan took the catch at the deep fine leg.

Imran Sr. took the wicket of Haris Rauf (1) and Dhani took the final wicket of Shaheen (2).

Batsman Masood was given lbw out as Shaheen Shah Afridi gave a golden start to the Qalandars. The undeterred Sultans, however, kept the scoreboard ticking.

In the fifth over, Rizwan thrashed Haris Rauf, but at the end of the over, Rauf got the upper hand as he dismissed the Sultans' skipper for 15.

Charles (10) was given lbw in the eighth over after spinner Rashid Khan appealed for a review.

In the third and fifth balls of the 18th over, pacer James Faulkner — who did not get a breakthrough in the entire match — finally dismissed Khushdil Shah (6) and Imran Tahir (4), respectively.

Shaheen, in the 18th over, bowled Blessing Muzarabani out for a duck.

Shaheen was able to take dismiss three players, Faulkner two, while Rauf, Rashid, and Daniyal took a wicket each.

ABU DHABI – Karachi Kings beat Lahore Qalandars by seven runs on Thursday to stay in the race for playoffs in ...