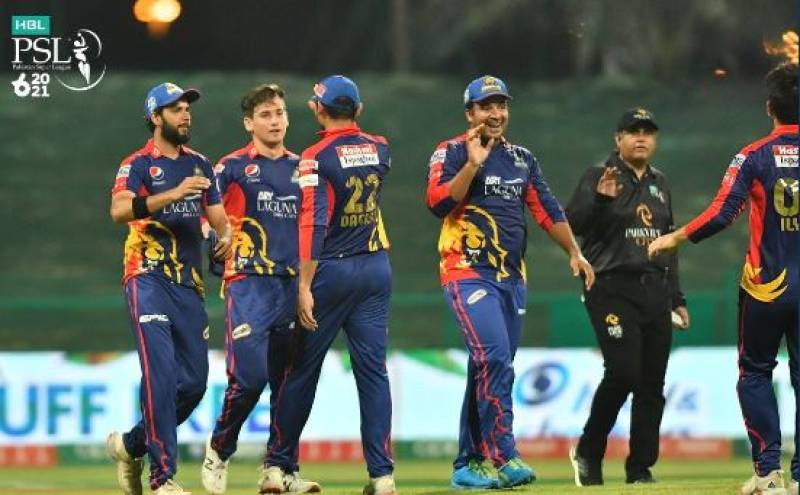 ABU DHABI – Karachi Kings beat Lahore Qalandars by seven runs on Thursday to stay in the race for playoffs in match number 27 of the Pakistan Super League's sixth edition at the Sheikh Zayed Stadium in Abu Dhabi.

Karachi had set a 177-run target for Lahore after electing to bat first at the toss.

Lahore openers Sohail Akhtar and Fakhar Zaman took their team to 38 runs, before the Lahore skipper was dismissed by Mohammad Ilyas from the last ball of the fifth over.

After the five-over mark, the Kings put pressure on the Qalandars with dot balls that culminated in the wicket of Zaman. The left-hander was stumped for 19 by Imad Wasim in the ninth over when he tried to step out of the crease to attack the Kings' captain.

In the 10th over, a run out sent Agha Salman to the dugout and put the Qalandars three down.

Lahore then lost their fourth wicket after Babar Azam took a sharp catch off Noor Ahmed's bowling from the last ball of the 12th over.

Ahmed was given the ball again in the 14th over, and he dismissed Mohammad Hafeez to put Lahore five down. Hafeez departed after making 36 from 36 balls.

At the 16th over point, Lahore required 64 runs from 24 balls. But then, Tim David and James Faulkner hit Abbas Afridi and Ilyas for some boundaries to keep their team in the game.

The two built a partnership of 58 runs from 24 balls.

The duo's charge ended when Afridi dismissed David to tilt the game back in Karachi's favour. He had departed after making a 14-ball 43.

Mohammad Amir was asked to bowl the second last over of the game and gave away only 7 runs. The over was crucial as it restricted Lahore to a point where they needed 20 runs from the last 6 balls.

The runs were enough for Ilyas, who bowled the final over in defence of the total, and Qalandars lost the game by seven runs. They ended with 169/7 in their 20 overs.

In the first innings, the Kings set a 177-run target for the Qalandars courtesy Babar Azam's half century and a cameo by Imad Wasim and Danish Aziz.

The Kings lost their opener Sharjeel Khan early in the innings when he tried hitting Shaheen Shah Afridi for a six. The ball did not cross the boundary line and ended up in Tim David's hands at square leg.

The Kings should have lost more wickets but dropped catches ensured that Babar Azam and Martin Guptill remain at the crease till the 13th over.

It was on the last ball of the 13th over that Guptill was dismissed by Ahmed Daniyal. In the next over, Mohammad Hafeez dismissed Najibullah Zadran for a duck, just when Karachi were looking to up the ante.

Babar Azam, who looked undisturbed on one end of the crease, reached his half-century in the 15th over of the match.

In the 16th over, Rashid Khan removed Chadwick Walton and Babar Azam to put the Kings five down.

Azam was removed for 54 and Walton departed after making just 10 runs.

In the last five overs, Aziz and Wasim's unbeaten 44-run partnership took the Kings to 176/5.

For the Qalandars, Rashid took two wickets, while Hafeez, Daniyal and Shaheen took one each.