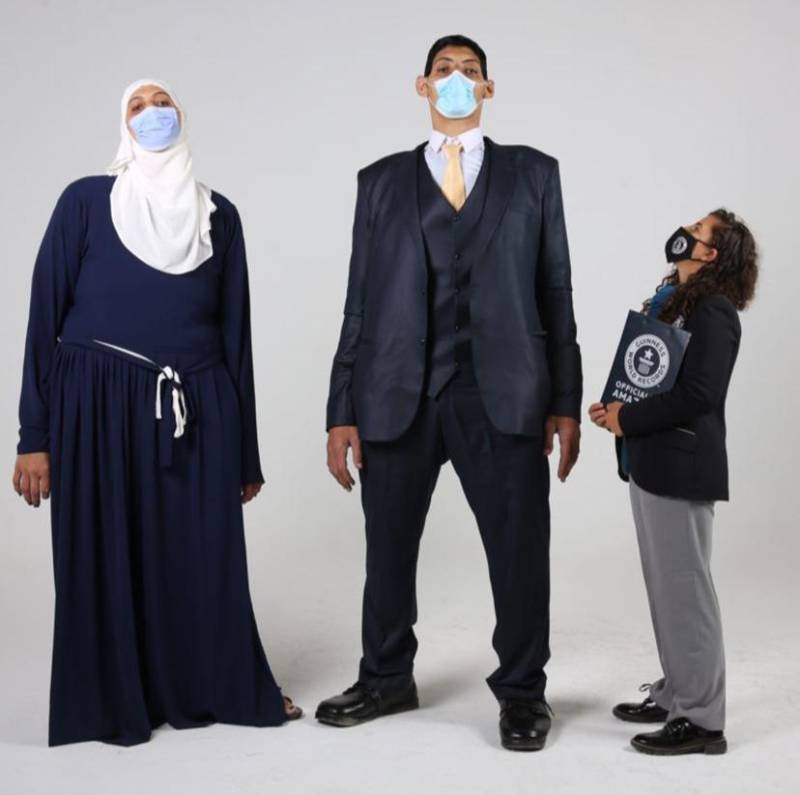 Guinness World Records has confirmed that Egyptian siblings Huda Shehata and her brother Mohamed Shehata have claimed a total of five records between them.

The siblings together have a combined height of a whooping 414.4 cm (13 ft 7 in) which is nearly as tall as a London double-decker bus.

On the other hand, Mohamed claimed the record title of Widest Hand span on a living person (male) with 31.3cm (12.32 inches) on his left hand.

Guinness World Records Adjudicator Kenzy Defrawy met the siblings in a clinic in Egypt to take their measurements while keeping in view the social distancing protocols and travel restrictions.

Further, she was aided by a Professor of Orthopedic Surgery, Dr Khaled Emara, and his medical staff Dr Mahmoud El Shopaky and Dr Mohamed Nour.

Huda and Mohamed live with their mother, Mrs Rouhiy, in a small village 90 minutes outside the Egyptian capital, Cairo.

They are believed to have a benign tumour in their pituitary glands that caused an excess production of growth hormones.

Born in January 1991, Huda’s childhood felt normal until the age of 12 where sudden realization dawned upon her that she is growing excessively taller. Similarly, Mohamed started growing taller around the age of 12 too. His height soared and his hands and arms continued to grow to a record-breaking size.

Both siblings are still growing in height and they may need to undergo an operation in future to stop their growth.

A Chinese woman named You Jianxia breaks her own world record for longest eyelash. She has been on the Guinness World ...