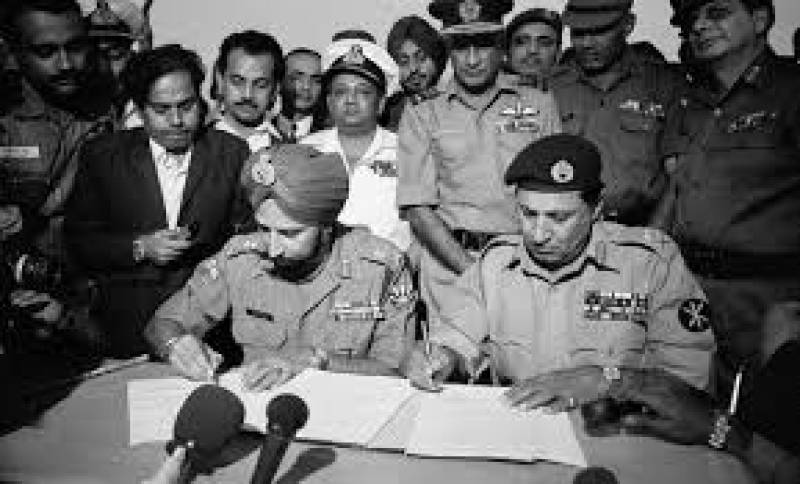 On the morning of December 16, 2017, commanders of Indian Navy’s eastern command laid a floral wreath at a war memorial to members of the Indian armed forces who perished in the war against Pakistan in 1971.

They were marking a war anniversary, known as Vijay Diwas in Hindi, the language of the minority northern ruling elite. At 11:16 AM, Prime Minister Narendra Modi tweeted a special message. He saluted the Indian soldiers who fought in 1971 and said they “protected our nation diligently.”

There is one problem: India was not under attack in 1971. Pakistan did not launch any war, and the Indian nation faced no threat from any country that year.

The real story is starkly different. Today, multiple books and investigative articles, and, surprisingly, even Prime Minister Modi himself, confirm that India invaded Pakistan in a war of opportunity to cripple a country that was busy in the domestic chaotic aftermath of a messy election.

India in 1971 violated international law by launching an unprovoked invasion of East Pakistan using an ISIS-style terror militia it trained with help from Soviet Union. This was a war of opportunity, not a necessity, with the objective of breaking away Pakistani territory, a war that has permanently destabilized the region with far-reaching impact.

Moreover, the 1971 war partially helps explain why today’s war in Afghanistan will not end easily.

Thousands of Pakistani civilians died in the 1971 war, massacred by the Indian-trained militia. The Indian casualties were far lower in comparison. Therefore, India’s Vijay Diwas, building a war memorial, and pretending the Indian army was ‘protecting the nation’, is an elaborate charade. Mr. Modi’s tweet, suggesting the Indian army was in a defensive posture protecting the nation, is tantamount to the deliberate distortion of history.

Calling out this lie is important. Aggressive policies have led India to wars with Pakistan and China, borderline war crimes in Kashmir, and a lingering possibility of a nuclear war in South Asia. New Delhi continues to play the same dangerous games in 2017 as it did in 1971, hurting the region and extending its proxy warfare to Afghanistan, where the lives of American, Afghan, Pakistani and NATO soldiers and civilians are at stake.

While the Indian nation enjoyed peace, Pakistan was under attack for much of the year in 1971. India launched a unilateral war of aggression. Its planning started at least three years earlier, Indian and Bangladeshi sources confirm. A ISIS-style terror militia was created and trained by Indian government and army to seize East Pakistan villages, commit atrocities, and start a flash ethnic conflict to break away Pakistani territory.

Members of this Indian ISIS-style terror militia were flown to the Soviet Union to receive training in guerrilla warfare at multiple locations, including Tashkent. Former KGB agent Yuri Zemenov, who defected to the West, gave a detailed account of how India and the USSR planned the 1971 invasion of East Pakistan.

This was an incredible opportunity that India could not miss: Pakistan had just come out of a chaotic violent election, and the Pakistan Army maintained a very small peacetime footprint in East Pakistan, easily outnumbered by the Indian military, backed by no resupply lines. Pakistanis were caught unprepared because they did not think they faced an existential threat from India. To most Pakistanis, there was no conflict with India except in Kashmir, which was at the UN Security Council. Pakistanis believed there was no question of India launching a war outside of the conflict zone of Kashmir, since that would mean expanding Pak-India hostilities.

But expanding the conflict is exactly what India did in 1971.

Here, it’s also important to recognize who exactly is Pakistan’s enemy in India. Most of the good people of India are not interested in a permanent war with Pakistan. The anti-Pakistan hate is generated by and comes from the influential Hindi-speaking, the upper-caste northern ruling elite in New Delhi. This obsession is rooted in the long history of Muslim dynastic rule in northern India, which created the Taj Mahal and, ironically, gave India the city of Delhi. Having said this, this ruling elite has forced the Indian media to largely conform to an anti-Pakistan narrative that encourages violence against Pakistanis visiting their country. It will not be long before a substantial segment of non-Hindi speaking Indians is brainwashed into hating Pakistan as a nation and people.

The events of 1971 were an extension of the proxy wars that India launched against Pakistan immediately after Pakistan’s independence from Britain in 1947. The first of those wars began in 1950, when India launched a proxy war for the secession of Pashtun- and Baloch-dominated areas of the new state. New Delhi’s ruling elite approached young Pakistani Marxists for this and sought the help of Soviet Union to break Pakistan up from within.

The tweet on Vijay Diwas by the Indian prime minister, and the series of statements he made on this war over the last two years, create the basis for a possible Pakistani legal case against the Government of India that could help set the record straight on this war. Pakistan can demand an apology from the Indian government for the devastation its actions caused. Pakistan can also request New Delhi to stop using the events of 1971 to perpetuate a lie. India has misled its people and the world for a long time on what happened in 1971.

Obviously, the Indian government will resist any challenge to its narrative but that should not deter the effort to correct history. Prime Minister Modi should blame himself for reviving this debate. He has single-handedly weakened India’s case on this war. Modi inadvertently revived the debate on India’s role in the war during a visit to Dhaka in June 2015, where the Indian prime minister admitted that rebels who fought Pakistan and committed massacres were undercover Indian soldiers.

This was a remarkable confession because, for four decades, India insisted indigenous rebels led the war in 1971 and India intervened to help them on humanitarian grounds.

Indian author Sarmila Bose, in her 2011 book Dead Reckoning: Memories of the 1971 Bangladesh War, provides a lot of context on how India distorted the history surrounding its role in the war.

Stories of survivors of the Indian-instigated massacres can be read in Tales of Survivors: 1971 War. Another detailed account on the Indian-trained terror militia can be found in Fall of Dhaka: How Mukti Bahini ‘cleansed’ Santahar town of non-Bengalis.

When India invaded East Pakistan, and dismembered a country five times smaller than itself, the message sent to Pakistan was clear: New Delhi will seize every opportunity to hurt Pakistan. The idea that Kashmir is the only conflict between Islamabad and New Delhi was dead. Many in Pakistan thought India might be ready for peace four decades after the 1971 events, but this theory was conclusively debunked in March 2016, when Pakistan arrested a high-level Indian terror agent, a serving officer in the Indian navy, who ran an elaborate terror network in Pakistan from his base in the Iranian city of Chabahar. He was caught during a covert mission inside Balochistan.

India is applying the same tactics it used in 1971 now in 2017, using proxies and the soil of Afghanistan and Iran to destabilize Pakistan. This Indian policy is wreaking havoc in Afghanistan. New Delhi benefits from permanent chaos in Afghanistan where Kabul, Washington and Islamabad trade blame as the three countries suffer casualties from terrorism and instability.