17 years after, Pakistan still dealing with the 9/11 fallout 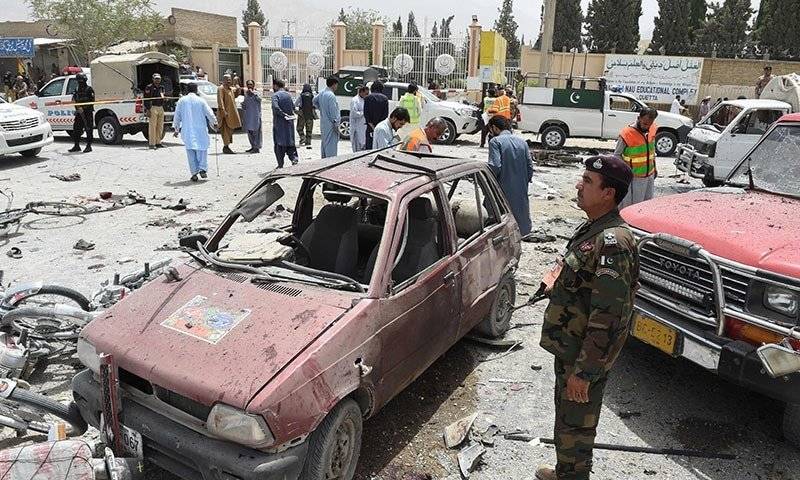 Tauseef Akhtar walks through a body scanner at the entrance gate of the Data Ganj Bakhsh Hajveri shrine in Lahore. A guard comes over to cautiously search his body for explosives. The 32-year-old Akhtar, who has eaten and slept here for the last 16 years, says he does not endorse this practice of screening devotees on the mausoleum of a saint, but he understands the need.

On July 1, 2010, three suicide bombers had killed 42 and injured 176 of the innocent devotees in Lahore's most iconic and revered religious site.

The tomb of Data Ganj Bakhsh Hajveri, a Central Asian Sufi saint who lived around 1000 AD, attracts thousands of followers daily, with Thursdays and Fridays the most crowded. Some 3,000 people were present in the complex when the terrorists struck.

"I was inside the main hall when two blasts rocked the shrine," Akhtar recalls, pointing. Body parts and debris fell on Akhtar, injuring his back and left leg, though his body has since healed.

"Sound of blasts and gory scenes in the courtyard are part of my routine nightmares," he says in a sombre tone. "I wake up thinking, Why on Earth would a Muslim kill worshippers here?"

A year later, the culprits still remain unidentified. In this incident as in others like it, either "militants'" claim responsibility through an obscure spokesman, a fax, or a little-known website, or the government conveniently attributes it to be Taliban's handiwork.

From the North to the South of Pakistan, most significant Sufi shrines, popular particularly among Sunni Muslims, have been targeted in a campaign that appears well organized.

Asim Sahibzada, who belongs to the Chishti order of Sufi tradition, sees the reign of terror as a calculated move to deter people from this tolerant and pacifist brand of Islam and to push them to embrace the militants' way.

"The enemies of Pakistan, whether extremist militants or foreign powers are using such tactics not only to scare people from spirituality but to deepen sectarian fissures in the society as well," he told me in a telephone interview. Sahibzada believes that proponents of such violence "find sanctuaries in parts of society having a little cushion for dialogue and co-existence".

Pakistani intellectuals have for years warned about the consequences that an increasingly theocratic regime in Afghanistan would have on Pakistan, but are largely ignored by government and civil society. The Pakistani leadership, in its decades-old dream of gaining "strategic depth" in Afghanistan by supporting allied militant groups there, still backs the Taliban in Afghanistan as well as in Pakistan's semi-autonomous tribal areas along the western border. Innocent people in Pakistan, like Akhtar and others at the Hajveri shrine last July, are wounded or killed by the Taliban's ever-multiplying offshoots.

For Pakistan, a country still mired in a decades-old standoff with India over the disputed Jammu and Kashmir regions and feuding over increasingly poisonous diplomatic rows with the United States, supporting the Taliban has been considered, as military leaders put it, "a strategic compulsion."

Pakistan had been the third country, after Saudi Arabia and the United Arab Emirates, to recognize the Taliban government in Afghanistan, which controlled over 90 percent of the rugged, war-torn country. Still, Musharraf quickly condemned the attacks, later agreeing to provide airfields, open airspace, and share intelligence to help the U.S.

Then-Deputy Secretary of State Richard Armitage allegedly warned Pakistan's intelligence director that the U.S. would bomb Pakistan if it did not cooperate, according to Musharraf. "The intelligence director told me that Mr. Armitage said, 'Be prepared to be bombed. Be prepared to go back to the Stone Age,'" Musharraf told CBS News in a 2006 interview.

Critics at home questioned Musharraf's sudden U-turn against the Taliban. "The events of 9/11 solved questions of legitimacy and credibility for the commando general [Musharraf], and that was more than enough for him," said Imran Khan, Pakistan's opposition party leader.

As the U.S. and NATO bombers overflew Pakistan, Musharraf's decision to provide airspace faced strong disapproval from the public, opinion polls at the time showed. Musharraf largely ignored the vocal opposition to his decision to back U.S. President George W. Bush's war against terrorism.

It didn't take long for the extensive extremist network based in Pakistan to retaliate against the government, targeting unarmed, innocent civilians, mostly vulnerable minorities, across the length and breadth of the country.

On October 28, 2001, a Protestant church in the southern Punjab city of Bahawalpur was attacked, killing 16. With the exception of a police officer who was killed, the casualties were all Christian worshippers. Soon, churches and high-profile Christians came under increasingly frequent attack. Many have since fled.

In January 2002, Wall Street Journal reporter Daniel Pearl was abducted from the coastal metropolis of Karachi. Khalid Sheikh Mohammad, one of the September 11 architects and then a senior leader of al-Qaeda's, later bragged to have personally beheaded the American journalist.

In the summer of 2004, extremists attempted to assassinate Lieutenant General Ahsan Saleem Hayat, Musharraf's most trusted colleague, killing six in the failed attack. The message to Musharraf and the military regime he led was clear: back off from aiding the foreign powers.

Seven months later, in December 2004, Musharraf barely survived three sophisticated attacks on his motorcade. The government admitted that low-level military personnel had been involved in planning and executing the attacks.

The U.S. response to September 11 led to a decade of war and conflict in Pakistan that has proven to be hugely destabilizing for the country, as MaleehaLodhi, one of Pakistan's best-known journalists and the ambassador to the United States from 2000 to 2004, told me in an interview. Islamabad has long advised Washington to work towards a diplomatic solution of the war in Afghanistan, she says, and to differentiate between al-Qaeda and the Taliban. "It took a decade of an unwinnable war in Afghanistan for the U.S. to seek a political settlement. But in between much has been lost, for the region and its stability, and for Pakistan."

According to figures presented to Parliament this year, terror-related deaths have soared past 35,000 over the past decade, including at least 3,500 military, paramilitary, police, and intelligence personnel.

"During the last 10 years, the direct and indirect cost of the war on terror incurred by Pakistan amounted to $67.93 billion or [Rupees] 5,037 billion," according to the Economic Survey of Pakistan, published by the Ministry of Finance.

The study reports that Pakistan's investment-to-GDP "ratio nosedived from 22.5 percent in 2006-07 to 13.4 percent in 2010-11 with serious consequences for job creating ability of the economy."

A decade after 9/11, Pakistan's problems seem to be getting worse. Since the killing of Osama bin Laden here on May 2 in a well-protected Abbottabad compound, the spat between Washington and Islamabad has become as bitter as it is public.

Senator John McCain, the former Republican candidate for the presidency, publicly concluded that Pakistan's powerful military intelligence branch, the Inter-Services Intelligence (ISI), maintains ties with Taliban as well as the even more violent Haqqani network. While most U.S. analysts have held this view for years, for an American political leader as prominent as McCain to say so reflects just how badly U.S.-Pakistan relations have soured over the ISI-Taliban relationship.

Recently, Pakistan rejected a U.S. proposal to open a consulate in the troubled province of Balochistan, which borders Afghanistan and is the only Pakistan province without a U.S. consulate.

U.S. Ambassador to Pakistan, Cameron Munter has met little success in his repeated pushes for Pakistan to launch a military operation in North Waziristan, where many of the militant groups fighting in Afghanistan are based. A push into North Waziristan, Munter reasons, would improve security in Afghanistan and accelerate the U.S. withdrawal there.

"Washington cannot humiliate Pakistan by trampling over its parliamentary resolutions against arbitrary killings through drone-fired missiles," said retired Air Marshal Masood Akhter, channelling the national outrage against the extensive U.S. drone program in western Pakistan. He added that ground conditions were unfavourable for a land operation in the tribal areas, especially North Waziristan, as the U.S. wants. He cited the public anger there at the national government and its allies in Afghanistan.

Last month, the London-based Bureau of Investigative Journalism released a study reporting that 168 children had been killed in 291 drone strikes in Pakistan's tribal areas since June 18, 2004. Roughly 80 percent of those strikes occurred during Barack Obama's presidency.

As with NATO's controversial "night raids" that have so enraged Afghans, many Pakistanis see the drone attacks as violations of privacy and the Pakhtun code of conduct, locally called "Pakhtunwali", justifying revenge.

A senior Pakistani official, on the condition of anonymity, discussed the case of Bin Yameen, perhaps the most feared militant in Pakistan's Swat region, who was driven by a passion for revenge against the Pakistani military that had "invaded" his home.

"Bin Yameen felt disgraced and dishonored for strangers breaking into his home at night while he was asleep with his family and after his release from jail, he joined the extremists in Swat valley to slaughter captured security officials," the source recalled.

"Whereas the first war brought Afghans, heroine, and Kalashnikovs in Pakistan, it also left a deep imprint of F-16 on the Pakistan mind, probably the most painted foreign object on our colorful buses and trucks," said Malik Ramazan, a retired high school principal in central Pakistan's Multan city, of the American fighter jet that became closely associated with the U.S. and the war. "Now the Americans would be leaving images of dreadful drones as an embarrassment to our sovereignty."

There are few obvious Americans here for angry militants and would-be militants to target for revenge, so it is Pakistan's security officials, viewed as complicit, and civilians who are often made to pay.

Last month, a U.S. drone killed 18 people in Miranshah, a city in the North Waziristan tribal area. The next morning, two suicide bombers claimed the lives of seven policemen in Peshawar.

The tit-for-tat revenge war extends to the country's farthest southern corner, the port city of Karachi, where containers of NATO military supplies are loaded on to Afghanistan-bound trucks. The trucks are frequently targeted by militants in Pakistan.

"I am a lucky one to survive with NATO cargo and sometimes fuel tankers as you never know when the attackers emerge to disappear," said Ayub Afridi, who has been driving the 18-wheelers for almost two years. Afridi's family has been pressuring him to quit because they say he is serving the American occupation.

Amina Masood Janjua has been trying to find her husband since 2005. Once a housewife, Janjua's organization, Defence of Human Rights Pakistan, has registered the cases of over 900 missing people in Pakistan.

"While pressing the government and the courts for our loved ones, we are also trying to maintain the families' faith in the system lest they lose hope and become too desperate," Janjua told me. She has been able to locate some missings persons, sometimes by taking judicial action to pressure Pakistani intelligence agencies to set them free.

Even if the country's superior courts now enjoy unprecedented autonomy, the judicial process has been painfully slow and, often, the prosecution ill-prepared.

"While there are hundreds of proven militants behind the bars after Swat operation, we fear an equal number to be innocents with no evidence or proof against them," said Shaukat Aziz Siddiqui, a human rights lawyer in Rawalpindi. He worried that jails, where hardened militants and suspects are not separated, are becoming centres of radicalization.

The article first appeared in The Atlantic.