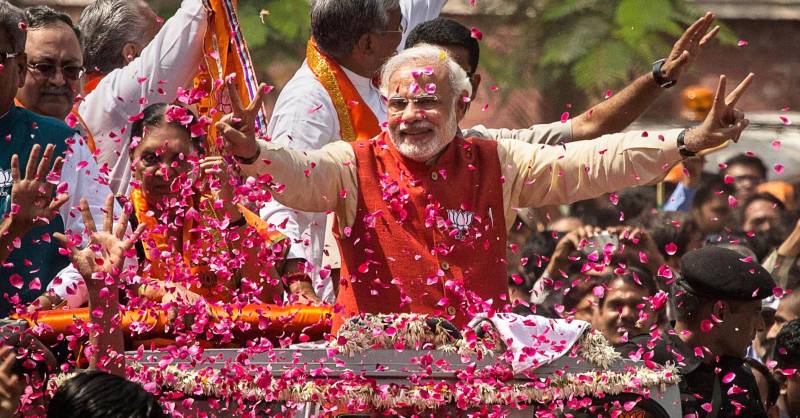 Riding the wave of populism and charisma courtesy a clever, aggressive and tech-savvy campaign, Narendra Modi's hold over India is stronger than it was in May 2014. This weekend, his party – Bharatiya Janata Party (BJP) or India’s People’s Party – won a rare single-party victory in Utter Pradesh (UP) after three decades.

The most politically significant elections  clear up quite a few misgivings about India’s response to Modi’s governance so far. Before analysing the political landscape after the March 11, here is a quick summary of recent developments.

The most significant of them all remains the outcome of UP vote where 19 per cent population is Muslim and the state’s population of more than 200 million Brazil. In the 2014 election, Modi had shrewdly chosen to contest from UP instead of his home state of Gujarat where he ruled for 13 years. Then, the BJP bagged 73 seats out of a total of 80, enabling the former tea-boy in Ahmadabad to become the prime minister of the world's largest democracy.

The BJP has broken the record of 309 seats that had been set in 1980 by Indira Gandhi’s Congress by bagging 312 slots in the 403-member state assembly. The ruling party did not field a single Muslim candidate. Overall, the number of elected Muslim members in the house has fallen to 24 from 69, and all of them sit on the opposition benches. Interestingly, Modi’s candidates sailed through in the Muslim majority town of Deoband.

Rarely do Muslims in India vote for a single party en bloc. The UP, a microcosm of India, saw near-perfect manipulation of voter psyche combined with chic election engineering in choosing candidates or crafting rhetoric. Even Modi’s controversial decision of withdrawing high-value currency notes in a demonetization move faced no hurdle. Some believe that it was seen as an act against black money aimed at the rich, furthering to his pro-poor stance. Numerous traders found his policies business-friendly while others backed him due to other factors like change or BJP’s choice of candidate.

Though the saffron party’s impressive win can’t be attributed to any single factor, it’s a clear manifestation that what is left of India’s secular image may completely erode in the next general elections.

India’s dilemma has been a lack of charisma and political astuteness within the opposition parties. For instance, Congress not only lacks leadership and strategy but also and faces fierce infighting. The anti-Modi vote remained largely divided.

The triumph of Hindutva extremists in India is anything but good news for Pakistan. The Modi government is already dubbing it as a sweeping endorsement of its policies, both domestic and foreign. Delhi is more likely to pursue a more aggressive posturing along the Line of Control (LoC) while upping the ante against Pakistan at the international fora. Deployment of US-made drones along the LoC has already raised alarm bells in Pakistan as well as at the UN. António Guterres, the UN Secretary General, is rightly advised by aides to press for peace and resumption of talks between India and Pakistan.

Observers privy to trends in cross-LoC firing and India’s deployment of troops see an increasing likelihood of increased hostilities in the summer. India’s recent missile tests and induction of a vast array of military systems complement the hawkish approach the BJP leadership has been pursuing. The ascent in Modi’s profile brings him almost at par with Jawaharlal Nehru’s popularity and electoral strength. Though court cases against him (like Zakia Jafri’s, wife of Congress Party leader Ehsan Jafri) for his role in the Gujarat massacre remain pending in Indian courts, the world has conveniently moved on.

With heightening risk of limited conflict on Kashmir and few prospects of resumption of talks with Pakistan, minorities in India, especially Muslims and Dalits, will see increasingly hostile treatment on an everyday basis. The Modi government will press harder for changing the status of Kashmiris in Indian constitution while engineering the demographics to Delhi’s advantage. It does not seem as if the BJP’s policies of trashing the Indus Water Treaty, use of heavy-handed presence of Indian military in Kashmir and clamping down on dissent at the universities as well as media will face any sane and credible opposition in the near future. The incumbent defense minister may further harden the policies as well as rhetoric aimed at Pakistan. The diplomatic offensive and hawkish military posturing are there to stay for a few years.

In an ideal world, a statesman with resounding public support would like to leave aside populist policies and take an aim at resolving longstanding disputes. In BJP’s India, such a possibility requires a miracle given the en mass presence of Hindutva hardliners and global military industrial complexes contesting for Delhi’s embrace. Personally, Modi is a proven self-preserving narcissist with ambitions more suited to a warrior king. The more optimist ones are recommended to read Nilanjan Mukhopadhyay's book titled Narendra Modi: The man, the Times.