A Letter to Benazir Bhutto 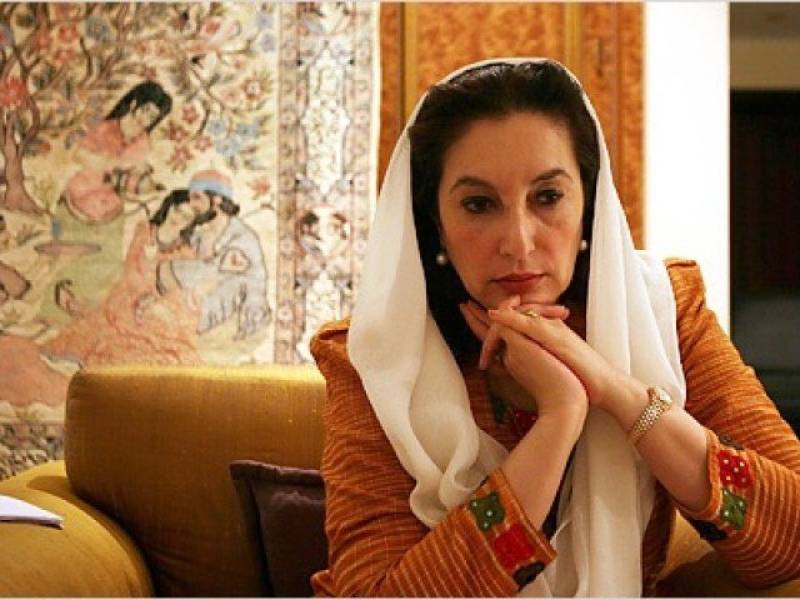 I have revered you since time immemorial, even before I got a chance to meet you. It was probably because a portrait of you was hanging by my drawing room wall, and I saw it every day when I woke up for school. Perhaps it can be attributed to the high regard in which my father held you. All I know for sure is that ten years ago, on 27th December 2007, I lost half of myself after the tragedy in Rawalpindi.

The first memory I have of meeting you is from one of Bilawal’s birthday parties. I was four years old at the time and I still remember I was so excited to meet you that I took my favourite toys along to show you. It was as If I was going to meet my fairy godmother.

I remember my continued excitement for days after, when I would tell everyone at school that I had finally met Benazir! I remember dancing every time Dila Teer Bija played and screaming Jiye Bhutto Benazir in sync with the song.

My next recollection of meeting you was at a time when I really needed it. My grandfather has passed away in the summer of 1998, and I remember being devastated. Even though the establishment was out to get you, you still managed to come to our home to condole with my family.

Those moments I spent with you were critical in helping me cope with the heartbreak of losing my grandfather who I adored so dearly.

Unfortunately, soon after you had to go into exile to avoid imminent persecution by the government of Nawaz Sharif. And that is exactly when I started to count the days before your return to Pakistan.

As I entered adolescence, I became a more vocal advocate of the PPP. I was an anomaly in my school as the “cool” thing at the time was to support Musharraf and his team of technocrats such as Shaukat Aziz.

As people around me hurled baseless allegations against you and try to tease me mercilessly by calling me Benazir ki aulaad - a title I accepted proudly - I would tirelessly argue how you were the only leader in the country that was the torch bearer of democracy and the only true representative of the people.

Whenever my father went to Dubai or London to meet you, I would only ask for one thing of him: to ask you when you would return.

Finally, my prayers were answered. You announced your return on 18th October 2007. I had covered my car with your posters and party flags. I could not sleep for several nights before your arrival due to my excitement. While my father was lucky enough to be able to greet you inside the airport and accompany you on the truck, I was more than happy to see you from amongst the massive crowds that had gathered from all over the country.

I had spent the whole day walking along the truck with the biggest smile on my face as I kept looking up towards you. As the sun set and the rally reached Karsaz the unthinkable happened. I was there when the first bomb exploded, the sound making me deaf and the heat wave slapping my face.

Luckily for me, I was on the side of the truck that didn’t bear the brunt of the explosion. Honestly, I didn’t even realize what had happened. It didn't even register with me that a bomb had gone off; my first thought was that the explosion was due to the electrical or sound system short circuiting. Before I knew it, the second bomb went off. The people accompanying me carried me to an adjoining street. But all I was praying for was your and my father’s safety. As the cellphones stopped working, the next fifteen odd minutes were torture. I breathed a sigh of relief when my father’s call finally came through, and I learnt that every one on the truck was safe.

Little did I know at the time that this joy would not last for long. I clearly remember every detail of that evening in December 2007. I was preparing for my exams when the TV channels started reporting that a bomb had gone off at your jalsa in Rawalpindi. I was so naïve, or maybe overconfident, that I could not even entertain the idea that you had been harmed.

When the first reports came in that something might have happened to you, my heart started beating frantically. Before I knew it, the ground was removed from under my feet when I learnt that you had been harmed in the terrorist attack. What I felt then was something I had never felt before.

I did not realize I was crying, but the river of tears flowing down my eyes said otherwise. It was a couple of hours before I could finally manage to move my arms and legs, and that is when I went into my father’s room only to find him crying in silence. Our worlds had been turned upside down. It was as if we were buried with that coffin in Garhi Khuda Baksh.

Even though you are not with us physically, I refuse to accept to this day that you are no more. You are very much still alive.

In my heart and soul Zinda hai BB Zinda Hai! You are still alive in Bilawal, and I see your image alive in him. It might have been ten years since the tragedy in Rawalpindi, but you are still alive in the hearts of the people and I know you will be there where there is still a Jiyala alive in this world. Shaheed Kabhi Marta Nahi!