Kashmir dispute and Kashmiris: Right to self-determination under international law 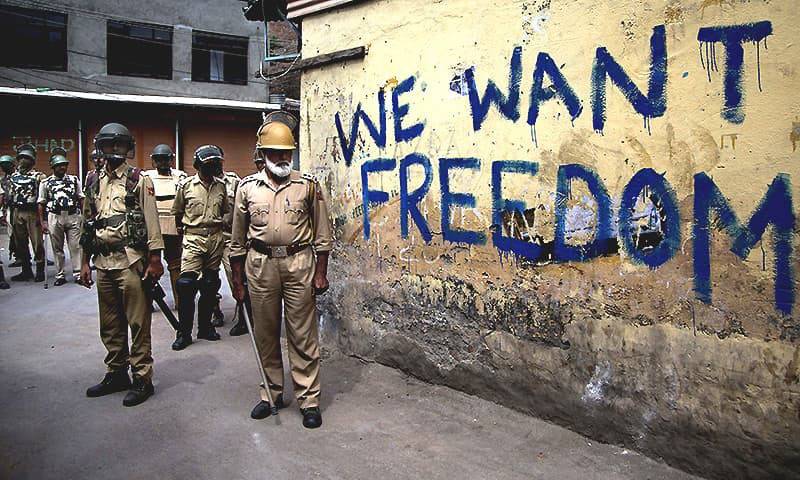 In the age of Pax Romana, a mere incantation of the magic phrase “Civis Romanus Sum- I Am a Roman Citizen” would entail the complete protection of a citizen’s fundamental rights across the then known world which fell under the sprawling wings of the mighty Roman Empire. Indian citizenship, recently hurled down the throats of recalcitrant Kashmiris, carry a wholly different tag of persecution, hounding and suppression, in all its convoluted forms. The Modi government is endeavouring hard to put the Kashmir issue on the backburner after abrogating Articles 370 and 35-A of the Indian Constitution, which ensconced the Kashmir state in special autonomy and status. The refrain repeated ad-nauseam by Delhi is the “internal” nature of the issue. However, facts speak louder than hollow words, and the indubitable fact is that Kashmir issue is a dispute between India and Pakistan, and recognized as such by the international community.

The “international” nature of the Kashmir dispute can be traced back to Jan 1, 1948, when India knocked the door of UN Security Council and resultantly the Council, via UNSCR 38, called upon the contending governments to refrain from aggravating the circumstances and report any material changes on the ground. Thereafter, the Security Council over a number of years issued a total of 17 resolutions on the dispute of Kashmir. UNSCR 47 of 1948, the most important of the Kashmir resolutions, calls for the resolution of the dispute of Kashmir’s accession to either India or Pakistan through effecting the democratic method of a free and impartial plebiscite. The recently closed-door conclave by the UN Security Council on Kashmir re-emphasized the disputed and international nature of the issue.

Simla Agreement of 1972, the premier bilateral accord between the warring nations, holds that “principles and purposes of the Charter of the United Nations shall govern the relations between the countries”, hence shining a light on the validity of the UNSC resolutions on Kashmir. The disputed nature is further reiterated as, “In Jammu and Kashmir, the Line of Control resulting from the cease-fire of December 17, 1971, shall be respected by both sides without prejudice to the recognized position of either side. Neither side shall seek to alter it unilaterally, irrespective of mutual differences and legal interpretations”. And finally, the reference to “a final settlement of Jammu and Kashmir” again upholds the contended nature of Kashmir issue between India and Pakistan. The international aspect of the dispute is affirmed when differences between the two nations are to be resolved “through bilateral negotiations or by any other peaceful means mutually agreed upon between them”. The Lahore Declaration of 1999 also spotlighted the fundamental disputed issue of Kashmir as the main hurdle towards ensuring peace and prosperity in the region.

The international and disputed nature of Kashmir is further highlighted by the establishment of the United Nations Military Observer Group in India and Pakistan (UNMOGIP) in January 1949. The UN military observers have had a continuous presence along the LOC for the last four decades, since the ceasefire of December 17, 1971. China claims a part of the disputed territory in Ladakh, and President Trump has repeatedly offered to mediate for a settlement. This shows that the world accepts the Kashmir issue as an international dispute.

Modi government should hearken the words of the British statesman Edmund Burke, spoken at the time of struggle for independence by Britain’s colonies in America, “the use of force alone is but temporary. It may subdue for a moment, but it does not remove the necessity of subduing again; and a nation is not governed, which is perpetual to be conquered”.