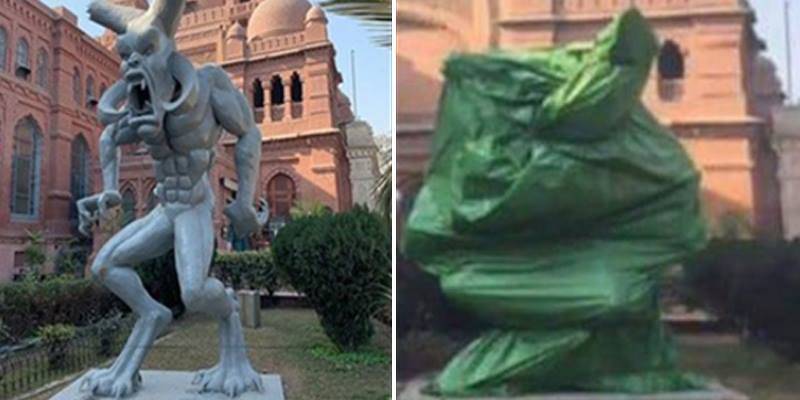 LAHORE — The statue installed outside the Lahore museum - dubbed satanic by a group of citizens - has finally been 'captured' days after a legal debate over the matter.

The sculpture designed by a varsity student has now been covered with a green sheet - a colour part of Pakistan's flag - to thwart the criticism directed at the work of art.

The development happened days after a petition was moved before the Lahore High Court seeking to dismantle the structure on the pretext that the 'sculpture of the devil’ had nothing to do with our [Pakistani] culture whereas the purpose of a museum was to preserve our history and culture.

The colossal statue, that overlooked the visitors entering the historic museum, attracted attention for its fangs disparaged by a section of the society which took a legal course to get it removed.

LAHORE — Top court in Punjab has summoned provincial authorities after it was moved to order removal of a gigantic ...

Earlier this week, Justice Muhammad Farrukh Irfan observed that “controlling Satan is the responsibility of us all”. He was thankful that at least someone came out against the devil, issuing notices to the provincial chief secretary and the Museum director, seeking a reply by next week.

The artist who made the sculpture, on the other hand, defended his project that is based on the topic of ferocity. Irbaatul Hassan, a student of Punjab University College of Arts and Design (PUCAD), said his artwork is a strong comment on the degradation of humans who stop self-reflecting and become immoral.

“The difference between a man and an animal is based on a man’s ability to self-reflect,” he writes in his artist statement.

The first of its kind sculpture, that stands 20 feet high, was placed outside the museum last Friday. Information and Culture Department Additional Secretary Saman Rai was also present at the occasion.